How did Longford farmers vote in IFA race? 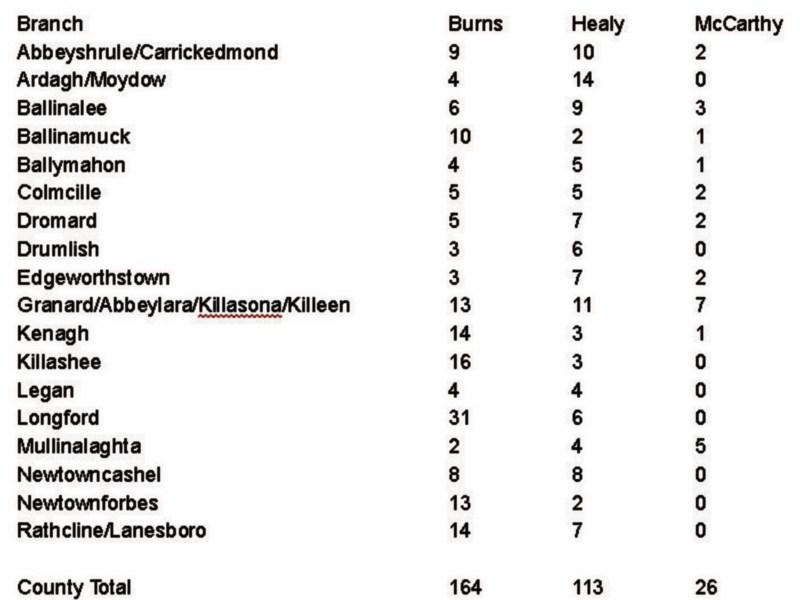 Longford farmers voted overwhelmingly in favour of Henry Burns in the recent IFA Presidential Election. Mr Burns, a beef, sheep and tillage farmer from Laois, was one of two candidates defeated by eventual winner Joe Healy, a dairy farmer from Galway. Mr Healy was elected the 15th president of the IFA last week when 14,122 of 28,000 who voted opted for him. It was an incredible victory for the Galwayman who originally planned on supporting Michael Silke before he pulled out of the running.

In Longford, 303 farmers voted in the IFA election with 164 voting for Mr Burns, followed by 113 for Healy and 26 for Flor McCarthy. (See table attached)

While Mr Healy won five of the 18 ballot boxes in Longford, he fell way short of the mark in county Longford overall.  However Longford fell into line with most of Leinster who, with the exception of Wexford Meath and Dublin, voted for Mr Burns.

Around the region, Leitrim farmers voted overwhelmingly for Mr Healy (222 votes) with Burns (109 votes) and Flor McCarthy (35) trailing well behind. It was a tighter margin in Cavan where Healy secured 330 votes compared to 302 for Burns and 36 for McCarthy.