Connie Gerety-Quinn has not ruled out running for Fianna Fáil again despite seeing her general election hopes fall short. 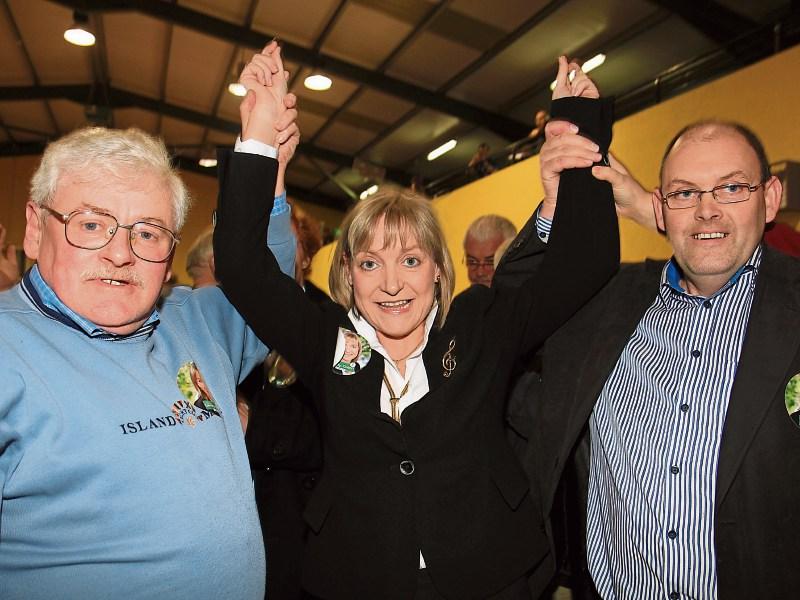 Connie Gerety-Quinn has not ruled out running for Fianna Fáil again despite seeing her general election hopes fall short.

Mrs Gerety-Quinn, a first-time candidate, was eliminated on Monday after a recount left her 40 votes behind nearest rival and outgoing TD James Bannon.

The mother of three said she was “terribly proud” of the decision almost 4,500 people took to give her their first preference votes last Friday.

She admitted the past number of months had been a steep learning curve for her but one she was immensely proud of.

“I am terribly proud of the vote I got with limited resources and against all the odds I feel it was a great endorsement by the people of Longford,” she said.

Her reference to those challenges had a lot to do with the Carrickedmond native's initial nomination as a general election candidate last October.

The controvery surrounding her nomination has been well-documented at this stage.

Speaking in the immediate aftermath of her electoral defeat on Monday evening, she admitted the fallout had hindered her chances.

“Had I had that full support I believe I could have been pushed over the line not just today but maybe two days ago and that's regretful not for me personally, but for Longford,” she confided.

“I said all along this is not about personal egos, this is about Longford.”

Ms Gerety Quinn, while cautious not to name names, likened the saga to climbing a ladder with “someone hanging out of your legs”.

“I did have a baptism of fire and I did have a rough ride from start to finish but I have ran a very honest campaign and I have had really good, decent people row in behind me,” she said.

“I am terribly proud and I am so pleased the people did row in behind me.”

And in a candid insight into the personal toll it inflicted, Ms Gerety Quinn played down assumptions that have been made over her own character.

“A lot of people might have regarded me as a very strong person,” she added.

“I am not. I am not that person but I had a belief that there was a purpose to the decision I made and while that purpose may not be reflected today I believe it will in the future.”

She also spoke at length about the catalyst for her eventual nomination - Ireland's newly-enforced gender quota laws.

It's anticipated that a record number of women will form part of the new Dáil when it reconvenes next Thursday.

The National Women’s Council of Ireland believes the quota system has already initiated change in the “culture of political parties” and the way they operate.

It's a debate Ms Gerety-Quinn linked to her own travails as a first time candidate.

“It's all about belief in the candidate and I am really flattered that people have shown they have that belief in me.

“The gender quota emerged because it was apparent that the culture within politics was not conducive to encouraging women.

“I have seen that and seen how difficult it has been for me personally but also in terms of ensuring other areas like family, children are taken care of,” she said.

There were messages of appreciation issued too.

Her husband, Joe, her three children and dedicated band of supporters were given special mention.

She was full of praise for the man she said was behind her party's return from the political abyss - Micheál Martin.

As she explained her reasons for first joining the party, Ms Gerety Quinn said her motivations were stirred by what she believed was an ever deepening gulf between urban and rural Ireland.

“A lot of people did feel, as I did, that there was a clear disconnect and that decisions were made on our behalf which certainly were not always to our better good. We have to bridge that divide,” she said.

“My strength in Fianna Fáil increased considerably after they absolutely reached an all time low and I did see how energy could be injected back into it. I felt, as with anything, when you have reached the lowest point there is only one way you can go.

“With work and a lot of effort put in by our leader Micheal Martin to keep the ship afloat at great personal cost, to that end he deserves to be acknowledged.”

Her biggest regret, she lamented, was not the controversy that marred her nomination or her failure to secure election to the 32nd Dail, but the decision by 6,000 Longford voters to send their 'number ones' to Westmeath-based candidates.

“ I think that is utterly awful, not for me, obviously, but for Longford,” she remarked.

“We are consistently talking about the lack of business and investment and opportunity and yet we have so many votes gone out of the county.

“ I just think that beggars belief and it makes you wonder where is the loyalty, what is it all about? It is really people speaking out of two sides of their mouth that they could actually send so many votes out of Longford.”

As for her own future aspirations, she talks of being a “conduit for Longford” should the county be left with no TD for the first time in its history.

“Am I bitten by the bug? I suppose I felt I had purpose in putting myself forward initially and in standing my ground as well.”