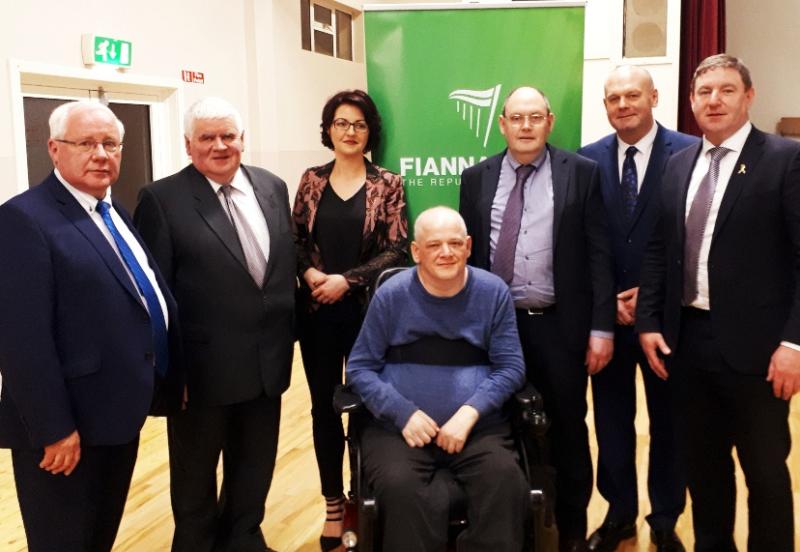 Fianna Fáil has set its sights on preserving its control over Longford County Council after the party completed its local election line up in north Longford.

Ballinamuck's 98 Hall provided the backdrop for its re-arranged Granard Municipal District selection convention, a week after the recent cold snap had forced its unforeseen postponement.

It was a rescheduling which brought with it plenty of intrigue and change with three new faces being added to the party ticket.
Given the well documented and anticipated departures of seasoned campaigners Luie McEntire and Martin Mulleady, party organisers have spent several months scouring the local landscape for possible alternatives.

Tasked with filling that void at the conclusion of affairs last Wednesday night were Dromard's Joe Murphy, Amanda Duffy, who will be looking to retain a seat for the party in Drumlish/Ballinamuck and Killoe man Victor Connell.

Mr Murphy, a direct replacement for fellow Dromard man and outgoing Cathaoirleach Cllr Luie McEntire, spoke of the challenges facing rural Ireland and Longford at the moment, exemplified by the likes of infrastructural deficits, broadband and loneliness issues.

Ms Duffy's inclusion on the party's running order means Fianna Fáil will be running female candidates in each of the three electoral areas.

In laying claim to her own desires and targets should she be successful, Ms Duffy spoke passionately about her desire to build a stronger community for all.

Completing the new look line up, disability and mental health activist, Victor Connell, said he was deeply honoured to take his place on the ticket.

Though disability and mental health were primary issues for the Killoe man, he said he was dedicated to helping to build a better community for all.

The sole remaining figure in the field and current County Councillor PJ Reilly said he was both proud and privileged to once again be representing the party at local level.

He told the convention that he would be more committed than ever to working for and on behalf of the people in the Abbeylara-Granard and wider North Longford area.

In addition to those comments, there were moments of poignancy too with emotional speeches coming courtesy of both Cllr McEntire and Cllr Mulleady ahead of their anticipated exits from the local political scene in three months time.

Having held office for the past forty years and in that time successfully contested seven elections while being a standard bearer for the party in north Longford, Cllr McEntire stopped short of ruling out a return for the McEntire family in the future as he expressed his hope to see his daughter, Louise, take on that mantle in due course.

First elected in 2004 at the height of his footballing career, he now runs a very successful house building business and had flagged his intention not to run earlier in the summer.