Longford captain Donal McElligott excited about another crack at Meath 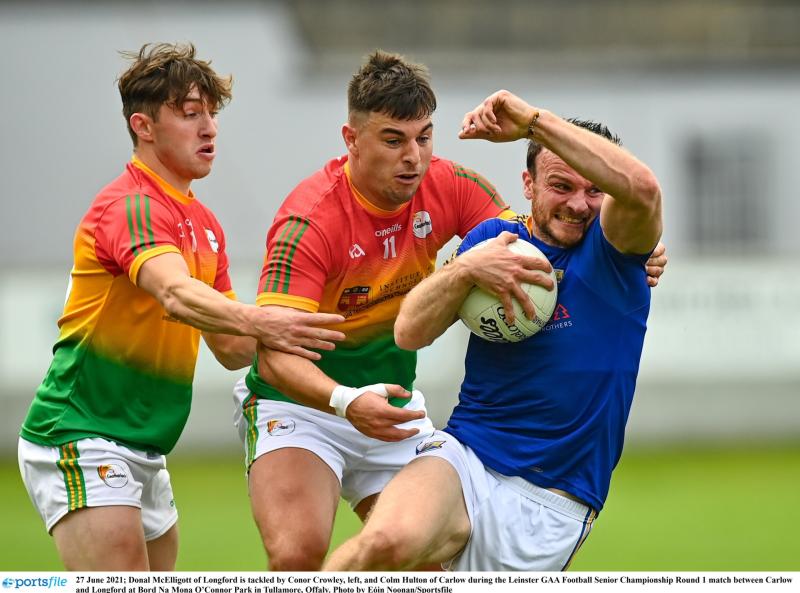 Donal McElligott on the ball for Longford against Carlow opponents Conor Crowley (left) and Colm Hulton. Action from Round 1 of the Leinster SFC on Sunday last Pic: Eoin Noonan Sportsfile

For Longford captain Donal McElligott it was all about getting that championship win on Sunday last and that’s exactly what happened as Longford defeated Carlow to advance to a Leinster quarter-final clash against Meath.

He said: “It was great to get the win. Anytime you come to play a championship game, especially a knock-out game like it is, this year. They are not going to be easily won. We were given Carlow lots of respect; they showed some great form earlier in the year in the league.

“We knew they were going to play a hard open brand of football and it was up to us to match it. For the majority of the game we did and played some good stuff but obviously lots to work on.”

The margin could’ve been bigger for Longford but it could’ve been tighter had Paddy Collum not made two superb saves in the second half.

McElligott was full of praise for his keeper: “He saved our bacon on a couple of occasions. All over the field there was some really good interceptions at particular times.

“I thought off the bench we got great quality; a real impetus at specific times when we needed it. It’s a squad game now for sure. We need to make sure that when we get the chance we make an impact.”

Sunday was McElligott’s first start of the year having missed the group stage of the league through injury. He is delighted to be back playing again:

“It was frustrating for me at times this year; didn’t know whether I’d get back. A lot of hard work by the backroom staff and support from my family. It’s good to get back on the pitch.

“I’m delighted from a personal perspective but obviously it’s about the team and when I wasn’t there other lads stepped up to the plate and did really well. Whoever gets the chance to wear the blue and gold  jersey, wear it with pride.”

Next up for Longford is a meeting with Meath in Navan on Sunday. The last time the counties clashed in the championship was three years ago when Longford produced a memorable performance to claim a surprise win.

McElligott said: “The last time we played them, three years ago, we turned them over in Glennon Brothers Pearse Park.

“We all remember that day; we had great home support. Unfortunately we don’t have as much a following at the games now as we’d like.

“We know they are watching at home and wishing us well. We get lots of messages before the game and that means a lot to us. Hopefully we’ll give them something to shout about next Sunday.”

It’s a seven day turnaround but that’s something that the Longford captain isn’t too concerned about.

“It is a quick turnaround, it’ll take a couple of days for the bodies to recover.

“When we are training this week it’s easy to pick out things we need to work on, we will definitely do that and prepare as best we can. As a player you always want to play, week in week out,” stated the Mullinalaghta man.