Pressure on Longford in battle to take Tipperary down 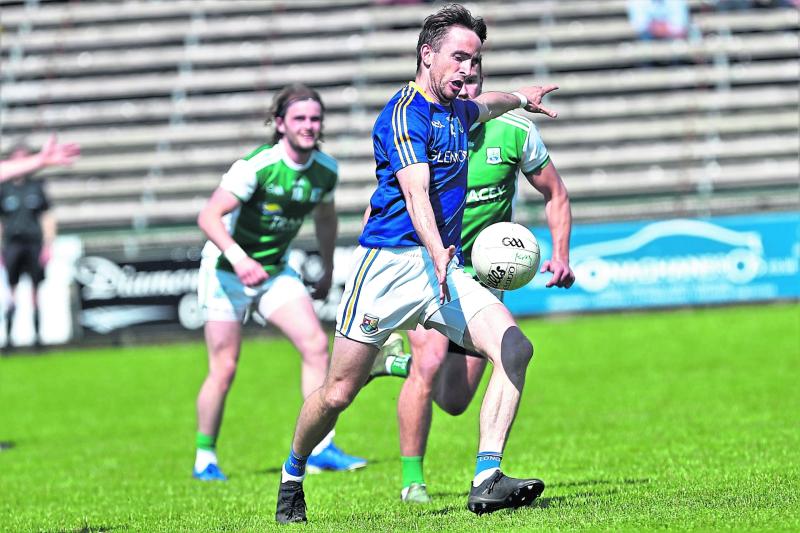 Colm P Smyth on the ball for Longford against Fermanagh in the recent NFL Division 3 North game at Brewster Park Photo: Syl Healy

Without a win so far this season in the aftermath of the tough defeats against Derry and Cavan, along with the draw against Fermanagh, the pressure is piling on Longford.

The picture will be a lot brighter if they can succeed in taking Tipperary down in the Division 3 relegation battle at Glennon Brothers Pearse Park this Sunday, throw-in 3.45pm.

And some supporters will be in attendance, a total of 200, in line with the easing of the Covid restrictions.

Now in his third year in charge of the county senior football squad, Padraic Davis has always placed a big emphasis on the National League.

The Longford manager and his totally committed players will be bitterly disappointed if they happen to drop down into Division 4 next season - a doom and gloom scenario that last materialised back in 2015.

Standing in the way are the reigning Munster champions Tipperary who were expected to be serious promotion contenders but now find themselves one step away from a stint in the bottom tier of the league after losing to Limerick (1-13 to 0-14) and Offaly (1-17 to 1-12) in what was clearly the easier of the regionalised groups.

Division 3 is always so competitive and it became even more difficult for Longford who were pitted in the minefield of the northern section.

It was always going to be a real uphill task and particularly so with the Ulster champions in the mix.

As it turned out, Cavan have also ended up in a relegation play-off that was inflicted upon them in their surprising failure to beat Fermanagh in the opening round but it will be a massive shock if they should happen to fall against Wicklow who lost all of their three games in the southern section.

Tipperary’s solitary win was against Wicklow and even that match proved to be a struggle with just three points (2-12 to 1-12) separating the sides in the finish.

After reaching the dizzy heights of the terrific Munster title triumph last year, relegation to Division 4 will be rated nationwide as a total disaster for David Power’s side and the manager has described the forthcoming clash against Longford as being like an All-Ireland Final for Tipperary.

Remarkable winners of the Munster senior  championship for the first time since 1935 after beating the hot favourites Cork (0-17 to 0-14) in the final last year, the future was looking good for Tipperary  football as the fruits of the breakthrough successes at minor and U-21 level in the recent years were beginning to blossom.

After the high of Munster glory, not much attention was focused on the heavy defeat against Mayo in last year’s All-Ireland SFC semi-final despite the total collapse in the first half with the rampant Connacht champions establishing a landslide 4-12 to 1-5 lead at the break.

Tipperary were a lot more competitive on the changeover in the eventual 5-20 to 3-13 defeat but gone from the team that started at Croke Park back in early December are a few very influential players.

Colin O’Riordan, the man with the strong Longford connections with his mother Imelda Casey a native of Killashee, is back playing with Sydney Swans in the Australian Football League after getting permission from the professional club down under to line-out with Tipperary in the 2020 Munster title decider and the All-Ireland semi-final.

Regular midfielder Liam Casey is also no longer part of the Tipperary panel after deciding to take a break this year while class act attacker Michael Quinlivan has yet to feature in the current campaign for some reason or another.

It remains to be seen when Quinlivan will be back in action but there is still considerable quality on the Tipperary team, most notably All-Star full-forward Conor Sweeney who will pose a major threat for the Longford defence.

Eligible to play for Tipperary in availing of the parentage rule, Ryan was a member of the Dublin U-21 team who beat Roscommon in the 2012 All-Ireland Final.

The Dub was also part of Jim Gavin’s senior squad who captured the Sam Maguire Cup in 2015 but he got no game time in the success that season that started the magnificent six-in-a-row.

So no matter what team that Tipperary start at Pearse Park on Sunday, Longford are up against it in the fierce fight for survival but the confidence factor got a boost in the encouraging draw against Fermanagh in Enniskillen.

But the halting of the losing run came at a price in Brewster Park a couple of weeks ago as Gary Rogers was sent-off after receiving a straight red card in the 65th minute of the game and thus he will be suspended for the showdown against Tipperary.

Robbie Smyth was in fine form against Fermanagh, firing over seven points before he was forced to retire injured (hamstring) midway through the second half and will be a big loss if he is not fit to feature on Sunday.

With Donal McElligott, Kevin Diffley and Oran Kenny also on the casualty list, the management team will have to deal with these problems in putting out the best possible side for this very important game with home advantage a definite bonus.

Division 3 status is at stake and a win over Tipperary will be a huge lift for all concerned in the build up to the Leinster Championship first round clash against Carlow at Bord Na Mona O’Connor Park in Tullamore on Sunday June 27.

Longford's most recent meeting against Tipperary was in Division 3 of the NFL last season with the home side winning by 3-12 to 3-7 at Pearse Park on March 1, 2020 and hopefully a repeat result will happen.