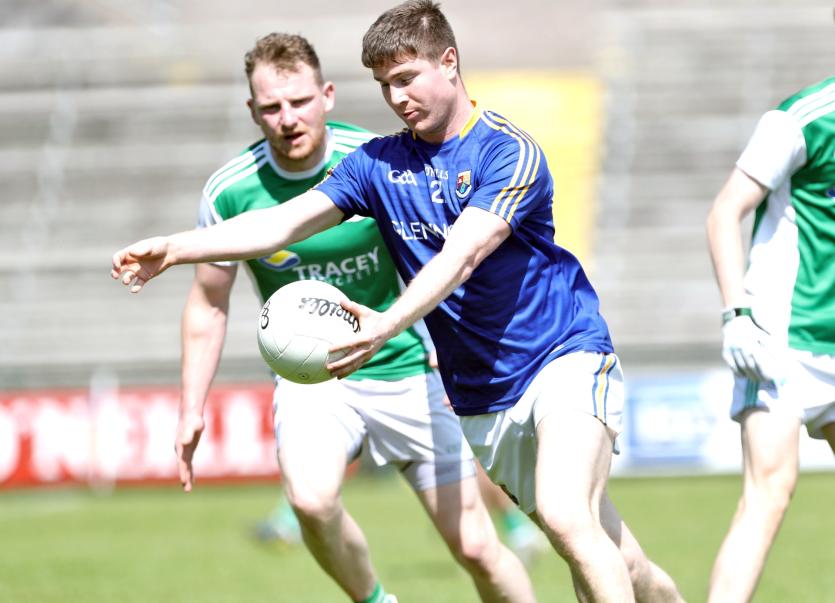 Larry Moran on the attack for Longford against Fermanagh. Action from the National Football League Division 3 North Round 3 game at Brewster Park on Saturday Photo: Syl Healy

A point from Sean Quigley deep into stoppage time earned Fermanagh a draw against a battling Longford side in the National Football League Division 3 North Round 3 clash at Brewster Park in Enniskillen on Saturday.

Fermanagh advance to the promotion semi-finals (v Offaly) while Longford now face Munster champions Tipperary in the relegation play-off in a couple of weeks time in the fierce fight to consolidate their Division 3 status.

It was a major improvement in performance from Longford despite a very bad start. Within the opening minute of the game, Fermanagh had scored a goal through Sean Quigley. He added on two more frees to give the Erne County a five point lead by the 7th minute.

Longford’s opening score came in the 10th minute; Darren Gallagher with a fine ball into Robbie Smyth and he flicked the ball over the bar. Smyth was a real sharpshooter for Longford in the first half from placed balls. A fine point from Rian Brady in the 24th minute drew Longford level.

The game was level twice in the final minutes of the first half before Fermanagh lost their keeper Chris Snow to a black card in the third minute of stoppage time. A pointed free from Gallagher gave Longford a marrow one point lead at the break: 0-10 to 1-6.

Dessie Reynolds hit over the first point of the second half to put two between the sides. Fermanagh replied but frees from Smyth and Gallagher gave Longford a three point lead midway through the second half.

Fermanagh came back at them with Quigley leading the charge and they overturned a five point deficit into a two point advantage by the 55th minute. Longford cut the gap to one through Joseph Hagan.

With five minutes of normal time remaining Longford were reduced to 14 men when Gary Rogers received a straight red card.

There was still time for late drama with Longford hitting the front in stoppage time with a point from substitute Darragh Doherty, only for Sean Quigley to earn Fermanagh a draw in the end.