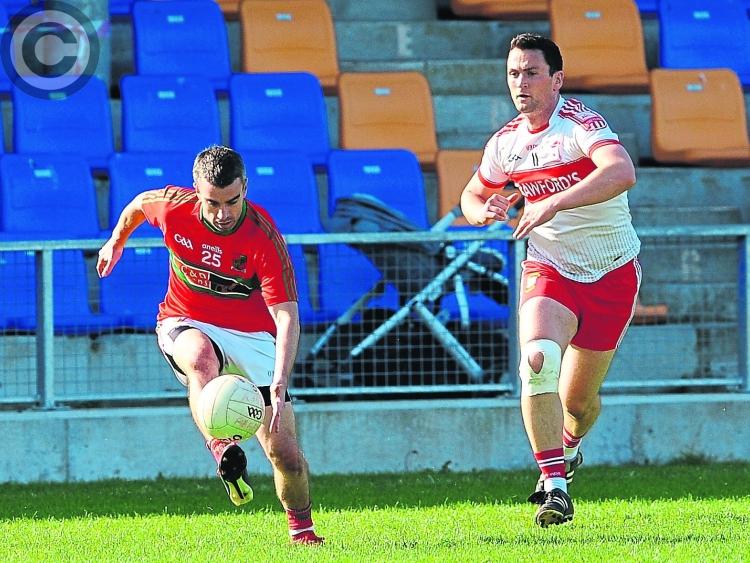 Aaron Gallagher on the ball for Mostrim in evading the challenge of Abbeylara opponent Colm E Smyth. Action from the SFC quarter-final on Sunday last Picture: Declan Gilmore

The stage is set for the semi-finals of the 2020 Senior Football Championship at Glennon Brothers Pearse Park this Sunday with Killoe, Mostrim, Mullinalaghta and Longford Slashers the last four teams left in the race for the Connolly Cup.

The general opinion is that Emmet Og and St Columba’s will make it through to contest the title decider the following week as the championship comes to a quick conclusion but Mostrim and Slashers will have something to say about that.

The Edgeworthstown side, under the guidance of such a shrewd manager in Dessie Dolan, caused an upset in some style on Sunday last when they beat Abbeylara by seven points in the quarter-final clash.

Ironically, that was Mostrim’s first win in the 2020 championship after drawing with Clonguish and losing to Killoe in the group stage and the current crop of players will believe that their club stand a good chance of reaching the senior final for the first time since 1992 when they last won the county title.

Already qualified Emmet Og had just a single point to spare over Edgeworthstown in the remaining group fixture at the Monaduff grounds and Thomas Donohoe’s sharp side are fancied to repeat the result in the match that really matters.

The reigning champions Killoe had the comfortable margin of five points to spare over Granard in the other quarter-final on Sunday last but will need to be very wary against  Mostrim, throw-in 5pm.

The first game on the senior semi-finals programme on Sunday is the meeting of Mullinalaghta and Longford Slashers (throw-in 2pm) and few can argue with the fact that St Columba’s are the strong favourites to reach the final for the fifth time in the space of seven years.

That is a tremendous achievement and after their very lucky escape against Colmcille in the recent quarter-final, thanks to a last gasp goal from James McGivney, Mullinalaghta will be very hard stopped now.

The 2018 Leinster club champions have quality players all over the pitch with the arrival of former Cavan star Cian Mackey this season adding even greater strength to a very well-balanced team.

Slashers struggled to beat Fr Manning Gaels in the previous round and were fortunate to survive with the slender margin of just two points separating the sides in the finish.

A major improvement will be required if last year’s beaten finalists are to have any chance of springing a shock against the might of Mullinalaghta who are bidding to win the SFC title for the fourth time in five seasons.

Slashers are generally a young side with plenty of pace which will need to be utilised in a very tough battle against a much more experienced St Columba’s team.

It is interesting to note that the last 10 SFC titles have been won by Killoe (4), Mullinalaghta (3) and Slashers (3) but Mostrim will be hoping to buck that trend.

It looks like a Killoe v Mullinalaghta 2020 final in a repeat of the 2014 decider which was won by Emmet Og but marked the emergence of St Columba’s as a force to be reckoned with.