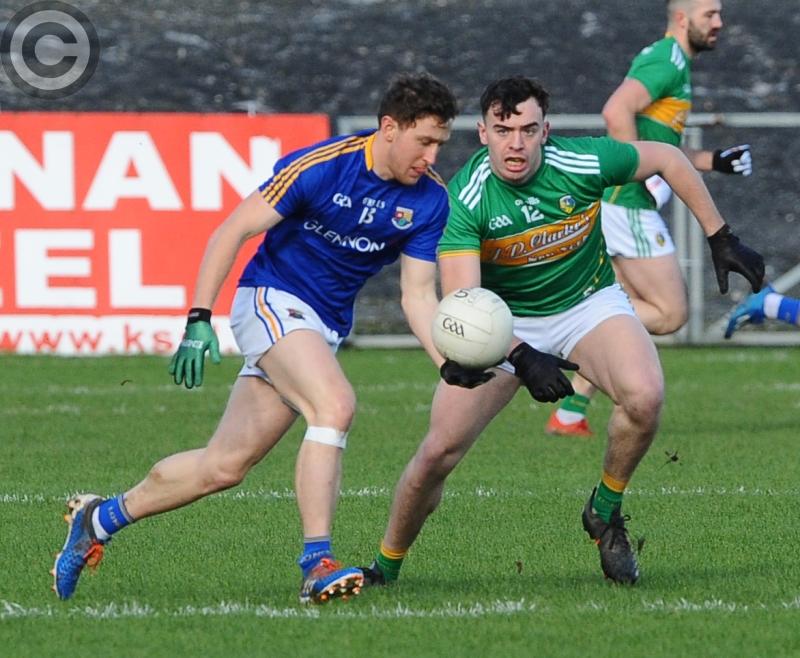 Daniel Mimnagh on the ball for Longford in breaking away from Leitrim opponent Dean McGovern. Action from the NFL Division 3 game on Sunday last Picture: Declan Gilmore

The priority for manager Padraic Davis and the Longford players in the National Football League was to consolidate their Division 3 status and they took a major step in that direction with a convincing win over neighbouring rivals Leitrim at Glennon Brothers Pearse Park on Sunday last. Unbeaten Longford have now collected five points out of possible six from their first three league fixtures in launching a possible promotion bid but the tougher games have still to come, starting with a trip to Newry on Saturday week (February 22) to take on Down at Pairc Esler, 7pm.

From the moment  Michael Quinn got a crucial goal midway through the first half, Longford never really looked like letting this vital victory slip from their grasp and were a lot sharper in attack in shooting Leitrim down.

The generally influential Quinn (whose work rate was immense) flicked the ball to the net after the opposing keeper Diarmuid McKiernan produced a point-blank save to stop a shot from Liam Connerton who then regained possession in passing to the Killoe man right in front of the posts.

It would have been a tighter contest had Leitrim not wasted several scoring chances, guilty of shooting a total of 13 wides, compared to just three for the home county.

Having said that, Longford were the superior side but allowed Leitrim right back into contention when they conceded a goal in the closing stages of the first half.

A penetrating run from Dean McGovern saw him release the ball to Darragh Rooney with Rooney planting a sweetly struck shot into the back of the net in the 33rd minute, after his first attempt was well saved by Longford keeper Paddy Collum.

Just two points separated the sides at the break, 1-7 to 1-5, but Longford had the edge against the wind in the second half to remain in control. They should have scored a second goal in the 56th minute when Liam Connerton had a point-blank shot brilliantly blocked on the line by Leitrim corner-back Paddy Maguire.

Whatever hopes Leitrim had of staging a late revival were dashed when defender Aidan Flynn was sent-off in the 60th minute after receiving a second yellow card.

Longford went five points clear when midfielder Kevin Diffley surged forward to fist the ball over the bar in stoppage time and moments later a Leitrim mistake was punished with Rian Brady scoring a second goal from a few yards out after receiving the perfect pass from Dessie Reynolds who had broken clear to create the chance.

Played in difficult wet and windy conditions with the adverse weather the main reason for a rather disappointing attendance for the local derby, roughly in the region of 1,000, Longford were forced to start without their ever dependable defender Patrick Fox due to illness but he was brought on in the final quarter.

Leitrim looked good in the early stages and led by 0-4 to 0-3 after 15 minutes with their points coming from Evan Sweeney, Darragh Rooney and a brace from the dangerous Dean McGovern.

Wing back Colm P Smyth broke through to blast the ball over the bar for Longford’s opening score in the 3rd minute and a converted free followed from Darren Gallagher before exciting young prospect Oran Kenny landed a brilliant strike.

Then came a decisive factor with the goal from the driving force that is Michael Quinn in a slick move orchestrated by Rian Brady who delivered a great ball into Liam Connerton.

That gave Longford a lead they subsequently never surrendered and four more points were added to their tally during the remainder of the first half.

Mimnagh registered Longford’s first wide in the 32nd minute and the midlanders made a good start to the second half with a fine point from Liam Connerton.

Dessie Reynolds then fisted the ball across the face of the goalmouth when a goal might have materialised before Donal Wrynn made a mark to fire over a point for Leitrim in the 44th minute.

The gap was still just two points but a couple of scores in quick succession from Rian Brady (free) and Oran Kenny extended the Longford advantage.

Kenny is a real joy to watch and he weaved his way through to land a delightful point in the 53rd minute to leave his side in a comfortable 1-11 to 1-6 lead.

Time was running out for wasteful Leitrim and while Rooney shot over the bar, there was a quick reply from Longford when Paddy Collum landed a well struck ‘45 arising out of the goal-line clearance by Paddy Maguire.

Another Leitrim score followed from Evan Sweeney but the visitors suffered a severe setback when they were reduced to 14 players in the 60th minute after Aidan Flynn was dismissed for a second bookable offence.

A point apiece was exchanged between Darren Gallagher (free) and Domhnaill Flynn before the hard working Longford midfielder Kevin Diffley got his name on the scoresheet and which was immediately followed by the Rian Brady goal to close out the game.