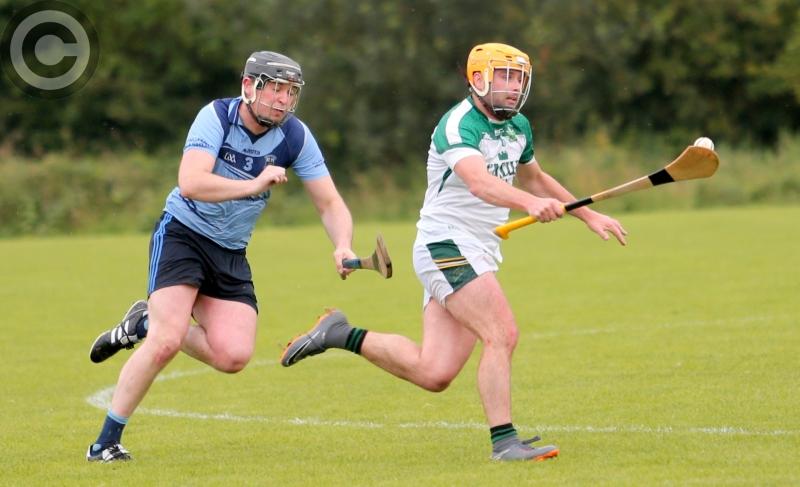 Bart Hanley on the attack for Clonguish Gaels with Longford Slashers opponent Eoghan Kavanagh in pursuit. Action from the SHC first round game in early August Picture: Syl Healy

The absence of Wolfe Tones Mostrim from the Senior Hurling Championship Final is a very rare occurrence indeed after completing a magnificent six-in-a-row of county titles last season.

Thus new champions will be crowned in the 2019 decider at Glennon Brothers Pearse Park this Sunday (throw-in 3.30pm) with Clonguish Gaels and Longford Slashers battling it out for the honour of capturing the JJ Duignan Cup.

Slashers will be in a confident frame of mind after showing a lot of character to end the long reign of Wolfe Tones in the final group stage game a few weeks ago with the sky blues coming from behind to emerge victorious by the narrow margin of two points, 1-17 to 2-12.

The deadly accurate Eoin Donnellan fired over 12 points (10 frees) in that most significant success and Slashers can call on the services of some other vastly experienced hurlers in Gareth Ghee and Sean Stakelum, not forgetting Robbie Stakelum.

A major setback for Slashers is long term casualty Karl Murray but with other county players in Johnny Casey, Cian Kavanagh, Reuben Murray, Paul Leonard and Conor Gallagher the town club stand a good chance of winning the senior hurling championship title for the first time since 2001.

Slashers went very close in their last final appearance a couple of years ago, losing out by just a solitary point against Wolfe Tones, but the current side are facing a tough task against Clonguish Gaels - particularly with one of their key players Karl Murray out of action.

The teams clashed in the opening round of the group stage back at the beginning of August with Clonguish coming out on top by the minimum of margins (1-10 to 1-9) after Paul Leonard scored the Slashers goal with virtually the last puck of the game deep into stoppage time.

Missing on that occasion was Joe O’Brien (injured) but one of the best hurlers in the county was back in action for the second round fixture a couple of weeks later against Wolfe Tones at the end of August, shooting 1-5 (four frees) in the 2-11 to 1-9 victory.

The lethal O’Brien is always a potential matchwinner for Clonguish Gaels who will be hard beaten in their quest to win the county senior hurling title, a feat that was previously achieved in 2012.

They then suffered the bitter disappointment of subsequent final defeats against Wolfe Tones in 2013, 2014, 2016 and 2018 and will feel that the time has come to bring the Duignan Cup back to Newtownforbes.

Apart from Joe O’Brien, the other main men on the Clonguish team are Bart Hanley (who scored eight points against Slashers in the first round clash), Paul Barden, Gerard Moore, Paddy Corcoran, Alan Sorohan and Eanna Daly.

Slashers are seeking to claim the county hurling title for the 12th time and while a close encounter is probably in prospect it looks like Clonguish Gaels will have the edge in their push to take this championship for the 5th time.

Whoever wins on Sunday will be back in action in the opening round of the Leinster Junior Club competition the following weekend with home advantage against the Wicklow Intermediate champions.