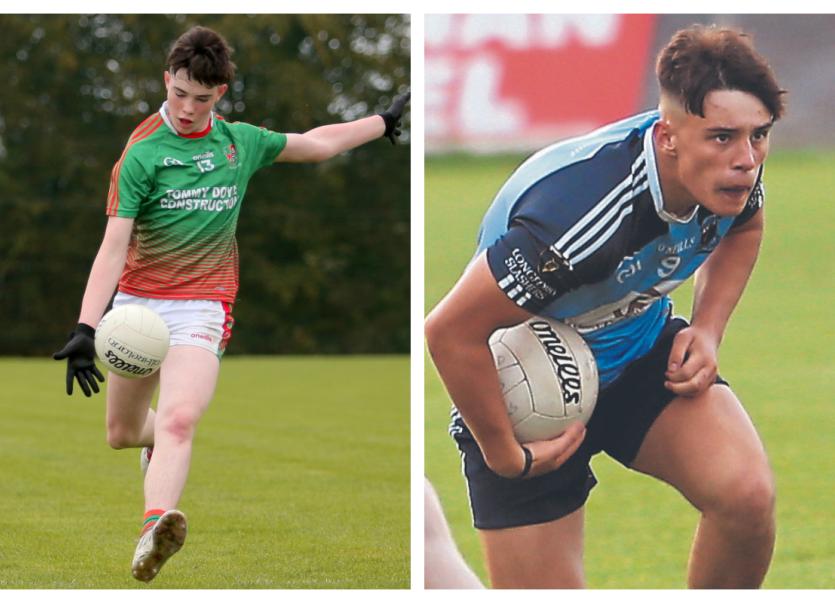 Jack Macken (St Colmcille’s/St Francis) and Daniel Kurkin (Longford Slashers), who will be in action in the Minor Football Championship Final

The Minor Football Championship Final is down for decision at Glennon Brothers Pearse Park  this Saturday (throw-in 4pm) with the novel pairing of Longford Slashers v St Colmcille’s/St Francis.

The Colmcille/Dromard/Ballymore U-18 amalgamation side are looking to create history while Slashers are seeking to capture the Harte Cup for the first time since 2001.

St Colmcille’s/St Francis  sprang a surprise in the semi-final by defeating Killoe Og who were going for three-in-a-row while Slashers got the better of Granard to reach the title decider.

Both sides were drawn in different groups in the championship. Slashers topped their group with victories over Carrick Sarsfields/St Dominic’s/Moydow Og and Killoe Og while St Colmcille’s/St Francis defeated Granard in their opening group game but were beaten by Clonbroney/Wolfe Tones in their second game. They advanced to the semi-finals on score difference.

The St Francis contingent of the amalgamation claimed the Minor ‘C’ Final title on Sunday last and they will have several members involved in Saturday’s ‘A’ final. Ollie Duffy was excellent in goals while Oisin O’Toole produced a man of the match performance. Conor McGauran, Fionn Hourican, Daniel Conboy and Aaron Farrell all played prominent parts in the fine win over Clonbroney.

In the semi-final win against Killoe, St Colmcille’s player Jack Macken was fantastic from placed balls and play and the amalgamation will hope he can put in the same display on Saturday. They have Conor McGauran, who played senior football for Dromard, while David Reilly played in the Intermediate Championship for Ballymore.

Slashers have members of their senior panel that reached the County Final on Sunday last. Ronan Kenny started the game and has impressed throughout the championship. Darragh O’Connell came on as a substitute while Tadhg McNevin was also on the panel.

Those three players played a vital role in Slashers getting to the Minor Final and will hope to continue their good form on Saturday.

Both sides have fine goalkeepers in Ollie Duffy and Stephen O’Brien who are capable of making match winning saves. For Slashers in defence Mark Odukoye was terrific against Granard and they’ll be hoping he can reproduce that performance in the county final.

St Colmcille’s/St Francis have a spread of excellent players and they will be hoping to put in a repeat of the fine display they produced in getting past the title holders Killoe in the semi-final after extra-time.

This is the first meeting of the sides this year and it will be a keenly contested final with interesting battles all over the field.

Slashers are fancied to come out on top but the amalgamation will be quietly confident of taking the county minor title.