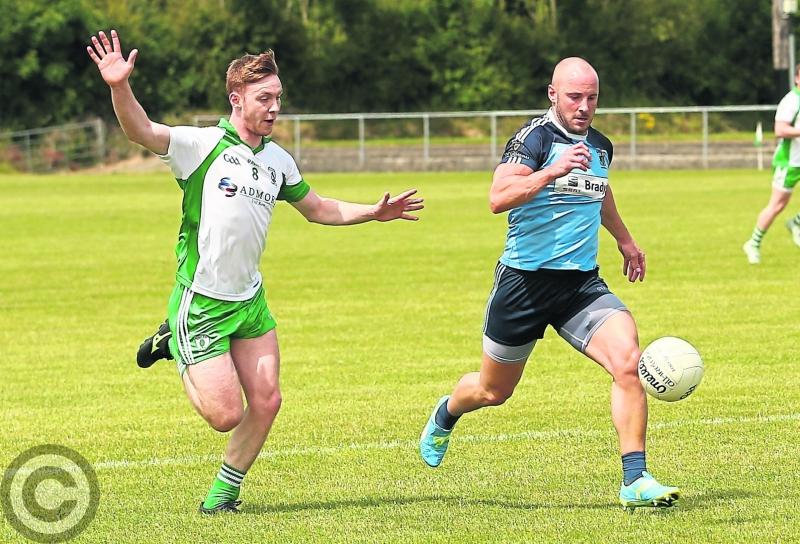 Peter Foy on the ball for Slashers with Killoe opponent Cian Farrelly in pursuit. Action from the Division 1 Football League game at Emmet Park back in July. Picture: Syl Healy

For the first time since the epic county senior football final replay back in 2012, neighbouring rivals Killoe and Longford Slashers will clash in the Connolly Cup decider and there is a great buzz in the build up to the big match at Glennon Brothers Pearse Park this Sunday, throw-in 4pm.

While the shock elimination of the three-in-a-row champions Mullinalaghta threw the race for the 2019 title wide open, the general opinion is that Emmet Og are now in pole position to move back into the winners enclosure for the first time since 2015.

The value of Killoe’s vast experience is a vital factor with ten of the team that captured the senior championship crown in 2012 featuring in the semi-final of the current campaign against Colmcille, the latter knocking out the Leinster Club title holders St Columba’s in the previous round.

Among the Emmet Og substitutes are Paddy Thompson and Ronan Keogh, who were also part of the Connolly Cup triumphs in 2012, 2014 and 2015, and when you add a number of promising young players to that list it must be said that the present Slashers side are facing a very difficult task in their bid to spring a surprise.

Just Dermot Brady, Barry Gilleran, Niall Mulligan, Conor Clarke and goalkeeper Colm Farrell remain from the team that suffered the bitter disappointment of losing out to Killoe in the county title decider seven years ago.

Slashers gained sweet revenge in the quarter-final the following season, beating Emmet Og on their way to winning the senior championship for the third time in the space of four years, but it has been a gradual rebuilding process since their last success.

Denis Connerton was the manager in a glorious period for the town club that yielded county SFC titles in 2010, 2011 and 2013 but Slashers have fallen on lean times in the recent past and failed to qualify from a tough group stage in 2017 and 2018.

The main objective for the new manager Noel O’Brien from Kiltoom in Co Roscommon was to get the club through to the quarter-finals this season and that was achieved with a draw against Colmcille and a win over Rathcline.

The generally youthful Slashers team were now entering bonus territory as they prepared to make their first championship appearance at Pearse Park in three years and showed no fear in their subsequent last gasp wins over fancied opponents Clonguish and Abbeylara to reach the county final for the first time in six years.

Four Clarke brothers - Conor, Ruairi, Robbie and Sean - along with Andrew Kelly are a prominent part of the Slashers revival and youth is certainly getting its fling in the current regime with the emergence of Gerard Flynn, Paddy Duggan, Daire O’Brien, Ronan Kenny and the O’Connell brothers Robbie and Darragh.

A fine blend of youth and experience is making steady progress in the plan executed by a very shrewd supremo in Noel O’Brien who is no stranger to Longford club football, having coached Ardagh, Fr Manning Gaels and Granard in the past.

Peter Foy and Andrew Dalton add considerable experience and are capable of making a big impact while Cian Kavanagh  is looking forward to a couple of county finals as he also lines-out with the club hurlers.

All the Slashers footballers will believe in their ability to cause an upset in the battle for Connolly Cup glory, despite the probable absence of the injured Peter Lynn who spent the summer in the United States and thus has not featured in the current championship campaign.

Lynn, a regular starter for the Longford seniors in the National League this season, got injured in a recent challenge game and is expected to be ruled out of the final.

Killoe have also suffered a blow with one of their best young players, James Moran, on the casualty list after he was forced to retire in the closing stages of the semi-final clash against Colmcille.

In another cause for concern the news coming out of the Emmet Og camp is that Daniel Keogh might not be able to take his place on the team after he got injured against Colmcille and he was replaced at half-time by Liam Hughes, returning to the squad after a summer break in the States.

So some selection headaches for the Killoe manager Thomas Donohoe who has really made his presence felt in guiding his native club to the county final in his first season in charge of the senior squad.

Goalkeeper Shane Fitzpatrick and the versatile Cian Farrelly are others who will feature in the final on Sunday and the indications are that the favourites Emmet Og (2/5 to win the title with the bookmakers as compared to 7/4 shot Slashers) will be very hard stopped.

After coming through the group stage unbeaten with a draw against Mostrim and wins over Carrickedmond and Abbeylara (the latter in a meaningless match as both sides were already qualified), Killoe were only beaten once this season.

Ironically that was against Slashers in the Division 1 league clash at Emmet Park in July and while the sky-blues fielded a near full strength side in winning by the comfortable margin of seven points in a timely pre-championship boost, Killoe were missing a lot of players on that occasion including Daniel Mimnagh and Simon Kiernan.

Thus you cannot read too much into that result which cost Emmet Og the senior league title as they eventually lost out on scores difference in a three-way tie with Mulllinalaghta (who retained the Skelly Cup) and Colmcille at the top of the table.

It now comes down to the match that really matters and after coming through the tougher half of the draw with wins over Dromard and Colmcille many GAA followers around the county think that Killoe are going to take the county title.

The probable midfield pairing of Simon Kiernan and Daniel Mimnagh will be difficult to contain with the solid defence anchored by the commanding presence of Michael Quinn and Padraig McCormack.

Killoe will be looking to Sean McCormack, Mark Hughes and Ronan McGoldrick to get the vital scores in their quest to win the senior championship for the 12th time.

Slashers were not considered to be serious contenders for the title at the start of the season but a lot of changed since then and they are improving with every game with their sharp pace a vital ingredient.

Getting to the county final was a great achievement in what has been a courageous team effort and while Slashers will be quietly confident in the chase for a 17th senior championship success, the vote goes to Killoe to come out on top.