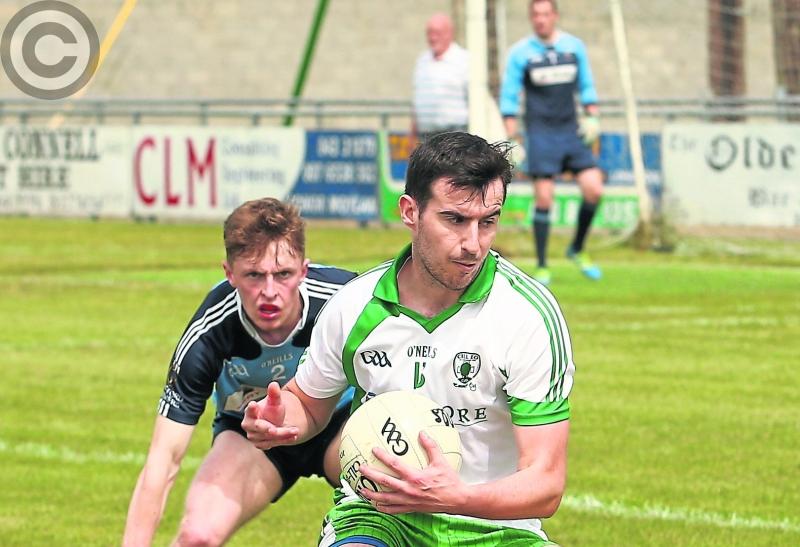 Mark Hughes on the attack for Killoe in facing the challenge of Slashers defender Ronan Kenny. Action from the Division 1 Football League game at Emmet Park back in July Picture: Syl Healy

The stage is set for the 2019 Senior Football Championship Final at Glennon Brothers Pearse Park this Sunday, throw-in 4pm.

Longford Slashers are seeking to win the title for the 17th time while neighbouring rivals Killoe Emmet Og are bidding for a 12th success.

The clubs last clashed in the Connolly Cup decider back in 2012 with Killoe emerging victorious after a replay.

Emmet Og and Slashers are regular opponents in the senior championship for the past few years, most recently in the group stage last season when Killoe came out on top by four points.

Slashers were looking good for a surprise win in the group stage a couple of years ago when they stormed into a nine point lead but Killoe produced a tremendous comeback to snatch a draw in a thrilling contest, 1-14 to 2-11.

Will another close encounter materialise in the battle for the county title on Sunday with excitement mounting in the build up to the final.

The eventual winners will take on the Westmeath champions St Loman’s Mullingar or Garrycastle in the first round of the Leinster Club Championship at Cusack Park on Sunday 27 October.

The big match referee is St Mary's Granard clubman Patrick Maguire who was the man in charge of the whistle for the Killoe v Slashers final replay seven years ago.