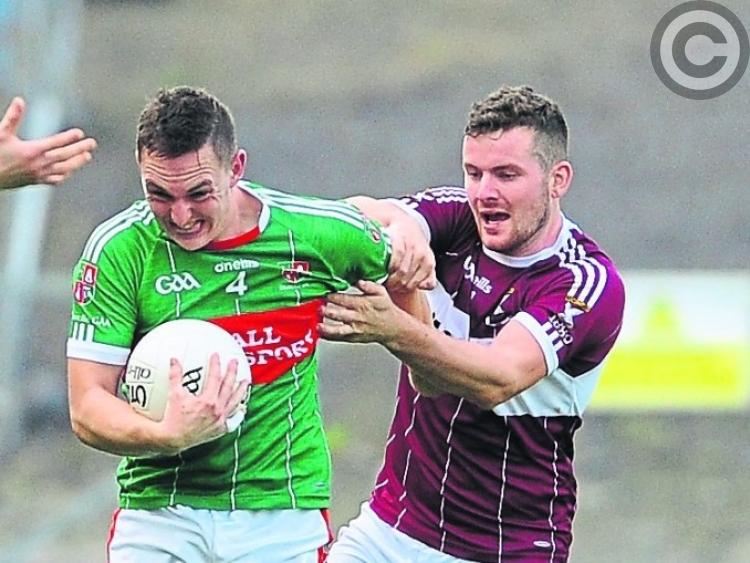 Fierce determination! Martin Mulligan on the ball for Colmcille in this tussle with Mullinalaghta opponent James McGivney. Action from the SFC quarter-final on Sunday last. Picture: Declan Gilmore

The race for the 2019 county senior football championship title was thrown wide open with Colmcille conquering Mullinalaghta in a massive upset at Glennon Brothers Pearse Park on Sunday evening last.

Longford and Leinster club champions St Columba’s appeared to be on course to qualify for the last four in their quest to complete a record equalling Connolly Cup four-in-a-row when they led by five points in the early stages of the second half.

But gutsy Colmcille refused to accept defeat as they gradually closed the gap and their fierce intensity was rewarded when they hit the front with a decisive goal from a penalty converted by their chief marksman Barry McKeon in the fourth minute of stoppage time.

Just a solitary point separated the sides in the finish as Eugene McCormack’s spirited side celebrated a famous victory in a most entertaining match and their reward is a semi-final showdown against Killoe who defeated  Dromard in the other last eight clash last weekend.

With mighty Mullinalaghta crashing out of the championship all the six teams left in the field for the county crown will be firmly focused on a glorious opportunity with the other two quarter-finals down for decision on a double bill at Pearse Park on Saturday evening.

First into action are Abbeylara and Carrickedmond (4.45pm) and a most intriguing game is in prospect in the battle to move a step closer to a place in the senior final on the first Sunday in October.

Abbeylara have been there for the past four years, losing on each occasion, but they will need to improve considerably on their current form if they are to make amends for all those bitter disappointments.

Carrickedmond, of course, are coached by former Abbeylara player and manager Maurice O’Connor and the progressive south Longford side will be quietly confident of making it through to the semi-final.

When the clubs clashed in the group stage a few weeks ago, Carrick had built up a comfortable seven point lead with 18 minutes gone in the first half but Abbeylara came storming back to emerge victorious on a 1-17 to 2-9 scoreline.

The greater experience of Mickey Harkin’s side will probably prove to be a decisive factor in the match that really matters but the underdogs Carrickedmond will be hoping to spring a surprise.

Old rivals Clonguish and Longford Slashers have been involved in many tremendous tussles down through the years and both are going through a rebuilding process with the gradual introduction of quite a few promising young players.

On the basis of the encouraging draw against Colmcille in the group stage, Slashers will believe in their ability to advance a stage further while Clonguish got a good win over Dromard in the opening round.

The subsequent four point defeat against Mullinalaghta was followed by a most emphatic hammering of Granard and the return of crafty forward Ciaran Williams from a lengthy injury absence is a big boost for Clonguish.

Slashers have made steady progress this season under the guidance of their vastly experienced manager Noel O’Brien from Kiltoom while another Roscommon native, John Rogers from Strokestown, is in charge of Clonguish.

A close encounter could develop but Clonguish appear to be the better team and are fancied to reach the semi-final against Abbeylara or Carrickedmond.