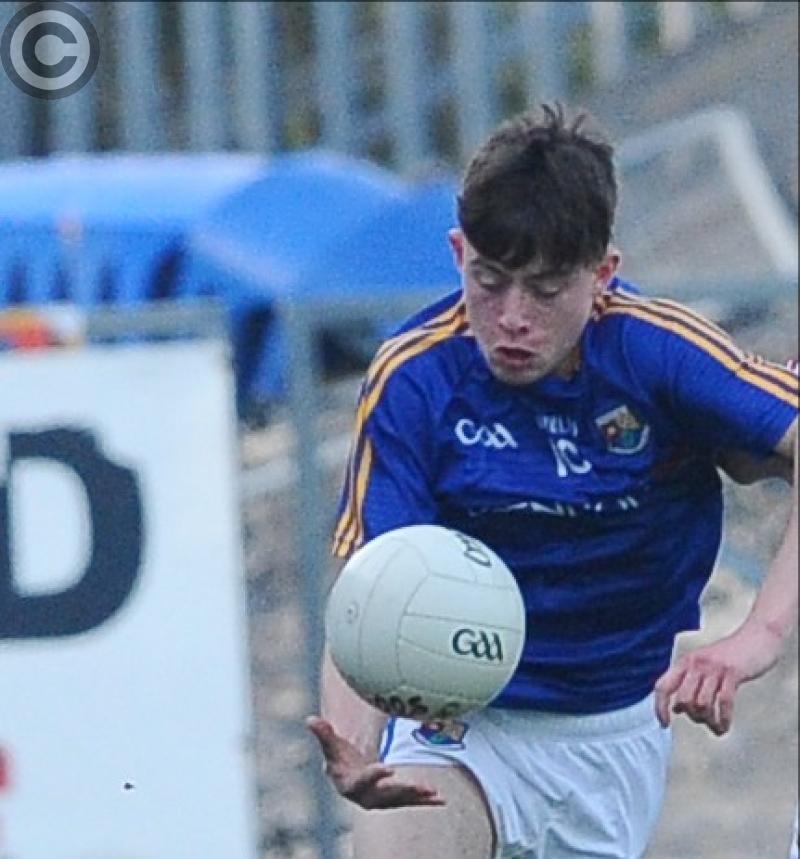 Aaron Farrell (Dromard) pictured in action for the Longford minors.

Jack Duggan scored 1-5 for Longford as they recorded a crucial win away to Carlow in the Leinster Minor Championship clash at Netwatch Cullen Park on Wednesday evening.

After losing their opening group game against Westmeath, the Longford U-17 footballers needed a victory to keep their championship hopes alive and they showed a lot of courage and character to achieve the required result.

Joint managers Dan McElligott and Barry O’Rourke will be pleased with this performance when the pressure was on and the county minors will qualify for the knockout stages of the championship should they beat Laois in their remaining group fixture at Glennon Brothers Pearse Park on Saturday May 18.

Duggan was a big threat throughout the game. He tested the reflexes of the Carlow keeper inside the opening minute with Cian Kavanagh bringing off a good save to deny the Clonguish lad who kicked the rebound over the bar.

Aaron Farrell then landed a second point for Longford but Carlow were on level terms following scores from Anthony Keating and Dylan Doyle with seven minutes gone in the game.

The next score did not materialise until the 19th minute when Longford regained the lead with a decisive goal that proved to be the difference in the finish.

A long ball out of defence by Diarmuid Kelly found Jack Duggan and he made no mistake with an excellent strike into the back of the net.

Longford failed to register another score during the remainder of the first half with Carlow hitting over a couple of points before the break with full-forward Darragh Nolan converting a free and a ‘45 to cut the deficit to just the minimum of margins: 1-2 to 0-4.

Two minutes into the second half Carlow were level through midfielder Dan Brennan but Jack Duggan put Longford back in front with a pointed free and a fine score from play.

It was all square again in the 42nd minute when Carlow wing-back Padhraic Byrne shot over the bar but Longford regained the upper hand to lead by two points by the 54th minute, the vital scores coming from Kevin Tansey and the impressive Jack Duggan.

Carlow cut the lead with a point in the 55th minute but Longford kept their composure in a nervy finish with further scores from Jack Duggan (‘45) and Keelin McGann to clinch a hard earned victory.

Carlow replied with a point from substitute Ben Crotty but Longford had done enough to get over the line in a tight contest.