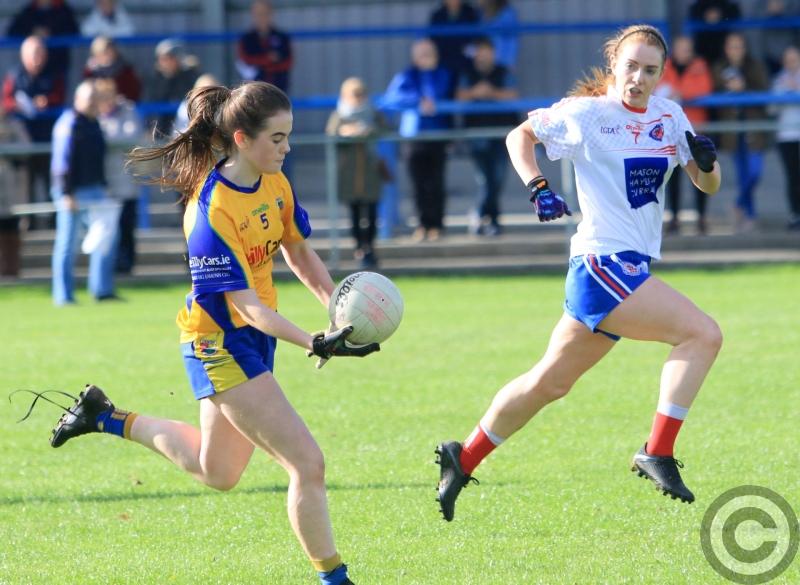 A large crowd was in attendance and the pitch in Carrickedmond was in ideal condition for this game. Carrickedmond got the first score on the board after two minutes with Sarah Shannon slotting over a 14 yard free.

Clontarf then registered their first score, a point from play by Fiona Skelly. This score was followed by a tap in goal by Michelle Mulvey for the Carrick girls to leave them 1-1 to 0-1  up after seven minutes.

This goal was cancelled out soon after when a Carrickedmond defender let the ball slip from her hands from a kick out which Clontarf lively corner forward Siobhan Killeen picked up and planted the ball in the back of the net to bring the Dublin Intermediate champions right back into contention.

Soon after Killeen was again on the scoreboard when she pointed a free. Carrick were awarded another free which Sarah Shannon converted before the Clontarf No 13 Killeen converted another free. Clontarf got the next two scores through Aoibhe Bell and Kate Fitzgibbon.

It was a fast and entertaining game with Sarah Shannon and Niamh Feeney registering a point apiece for the home side. Clontarf were back on the attack and Aoibhe Bell scored a neat point from a tight angle.

From the kick-out Carrick got the ball into full forward Emer Powell who had a great chance of a goal but her shot was deflected wide for a ‘45 after an awkward pull down by the Clontarf’s Caoimhe O’Connor who received a yellow card.

Clontarf’s big midfielder Sarah Fagan scored a great long range effort from 45 yards out and just before half-time the Clontarf full back received the team’s second yellow card for a high challenge. At half-time the scoreboard read Carrickedmond 1-5 Clontarf 1-7.

The second half started with Clontarf playing two girls down and were back in numbers defending as Carrickedmond piled on the pressure. Unfortunately the Carrick girls only managed to score one point during this sin bin time through a Sarah Shannon free  with Clontarf adding on another four points.

The Dublin team were now back to the full complement of players but it was at this point in the game that Carrickedmond started to play some lovely quick passing football and registered two well-taken goals through Lauren McGuire and Emer Powell.

Clontarf’s midfielder Niamh Hetherton hit back with a point. Carrick had another great chance of a goal with the Clontarf goalkeeper bringing off a great save. With the teams all square the last five minutes was exiting with Clontarf adding on two points through full-forward Caoimhe O’Connor.

With three minutes left to play Carrick got two more points through Sarah Shannon and Michelle Mulvey to leave the teams level again.

Both teams exchanged wides at this late stage but it was Clontarf midfielder Sarah Fagan who latched on to a Carrickedmond poor pass and went on to score the winning point for the Dublin champions.

Carrickedmond tried hard to work the ball back down the field but the final whistle came too quick leaving Clontarf marching on to the Leinster club semi-final next weekend. This was indeed a very sporting game played by two very well prepared teams and the Carrick girls can indeed hold their heads high after a super year winning their first senior ladies championship title in 31 years.