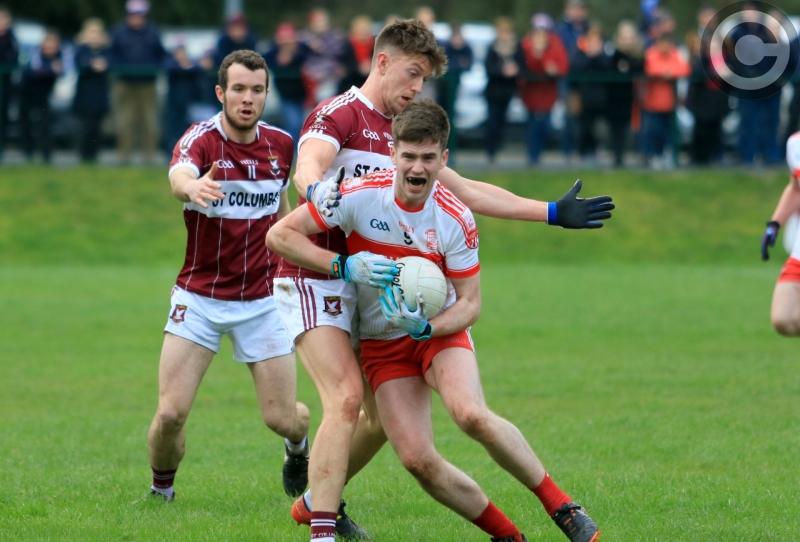 Barry McKiernan on the ball for Abbeylara in this tussle with Mullinalaghta opponent John Keegan with David McGivney also pictured in the Division 1 league game at the Laurels in April. Pic:Syl Healy

St Columba's are just one step away from joining a distinguished list of clubs in the county who have completed a three-in-row of Senior Football Championship titles.

And on the evidence of their relentless march to yet another appearance in the Connolly Cup decider, the general opinion is that the Mullinalaghta machine are unstoppable.

Providing the opposition in the county final for the third year in succession at Glennon Brothers Pearse Park this Sunday (throw-in 4pm) are the neighbouring rivals Abbeylara who will be desperate to avoid another defeat.

After running Killoe so close in the 2015 title showdown, Abbeylara also suffered the bitter disappointment of losing to St Columba's in the 2016 and 2017 finals and another fall at the last hurdle would be very hard to take.

While revenge would be very sweet indeed in their quest to capture the county crown for the first time since 2007, the odds would appeared to be stacked against Abbeylara and particularly so with the probable absence of their injured captain Robbie Smyth.

Longford’s star forward has been ruled out of action since sustaining knee damage in the second half of the single point defeat against Mostrim in the final group fixture seven weeks ago (Saturday 18 August to be precise) and it remains to be seen whether Robbie will feature in the final.

A serious loss, to say the least, but Abbeylara have battled on and deserve a lot of credit for reaching the senior title decider for the fourth consecutive year which is a great achievement.

Smyth was missing for the surprise win over Killoe in the quarter-final and the last four clash against Colmcille.

But the other members of the Abbeylara team stepped up to show fierce resilience with the powerful Conor Berry leading the charge and he has the ability to make a major impact  in the final.

Mullahoran man Danny Brady, in his second season at the helm, had to plan for the current championship campaign without several players from last year’s squad but the Abbeylara manager still got the job done and it will be a remarkable feat if his side should happen to win the Connolly Cup on Sunday.

James McEntire, Barry Smyth and Bernard Crawford, who all started in the 2017 final, and second half substitute Kevin Smyth have not featured in this year's championship campaign.

Having said that, resolute defender Michael McHugh is back in action after injury prevented him from featuring in the title showdown against Mullinalaghta last year while Nigel Rabbitte had to settle for a place on the substitutes bench and was only brought on in the closing minutes of the match.

Rabbitte is generally considered to be a talented footballer and is now one of the key men in the quest for championship glory while the return of Barry McKiernan (who showed a lot of promise at underage level) is another positive for Abbeylara.

Brothers Brian, Cormac and Colm P Smyth, along with  Fergal Battrim and Padraig Berry, provide a lot of experience and can be influential figures.

Jason Kelly, Shane Mahon, PJ Masterson and the Brady brothers Cian and Russell are also capable of making a  big impact for Abbeylara and you never know what might materialise on the big occasion and the nerves that it brings.

From the moment Mullinalaghta crushed Colmcille in the opening round back in July you could sense the hunger that their players possessed as the three-in-a-row mission began in comprehensive fashion in the cruise through the group stage of the championship.

While St Columba’s may have struggled somewhat in their laboured victory over Mostrim in the quarter-final, the comfortable margin of five points separated the sides in the finish.

It was a tougher task in the clash against Clonguish at the penultimate stage and Mullinalaghta were put under considerable pressure when they conceded a goal with 12 minutes gone in the second half.

After leading by 0-7 to 0-3 at the break and apparently in control, St Columba’s were trailing by two points when Conor Shields planted the ball in the roof of the net to give Clonguish a good chance of causing an upset.

Showing a lot of composure in refusing to panic the reigning champions quickly regained the upper hand to register five wonderful points in a glorious ten minute spell to clinch their place in the county final for the fourth time in the space of five years.

Mullinalaghta are fortunate in that they have avoided injury problems in their total dominance of Longford club football for the past three years and the team that started in last year’s final will probably be the same again on Sunday.

Manager Mickey Graham, apart from developing a formidable force, has instilled great belief into the tightly knit St Columba’s squad who will not hear of defeat and they are highly unlikely to slip up against Abbeylara.

The towering figure of John Keegan will be difficult to contain at centrefield and with other quality players in Donal McElligott, Rian Brady, Jayson Matthews and the McGivney brothers James and David it looks like another senior title triumph for mighty Mullinalaghta.

Patrick Fox, now established as a regular in the Longford defence, provides a commanding presence at full-back for his club and with other men of steel in brothers Shane and Francis Mulligan, Conan Brady, Simon Cadam and Gary Rogers on the Mullinalaghta team the Abbeylara attack are facing a difficult task.

The small club in north Longford nestled on the Cavan border are on the brink of something special and while the neutrals will be barking for the underdogs Abbeylara a confident vote is given to St Columba’s to come out on top in the battle for the Connolly Cup.