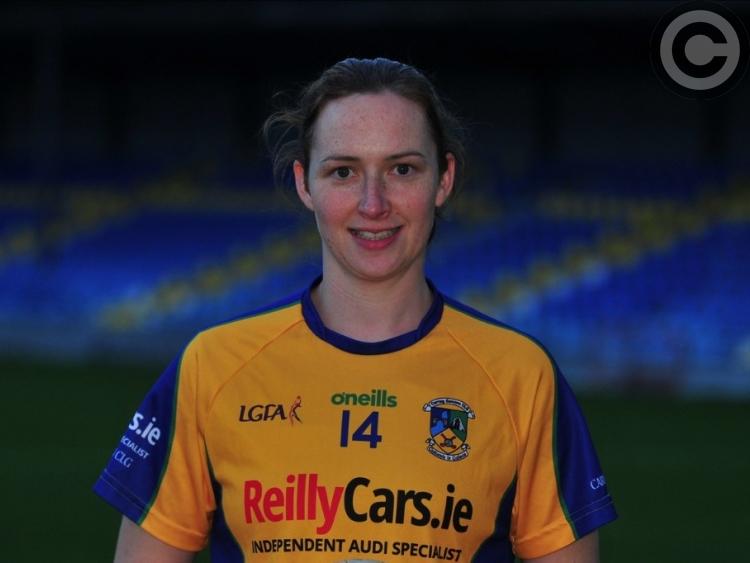 Emer Powell, the captain of the Carrickedmond ladies football team who take on Killoe in the County Senior Championship Final this Saturday. Photo: Frank McGrath

The leading ladies of senior club football in Longford take on the rising stars on Saturday as Killoe and Carrickedmond clash in the Ladies Senior Football Championship Final at Devine Park, Edgeworthstown this Saturday, throw-in 2.30pm.

Killoe are bidding to win their eighth county title while Carrickedmond are seeking their second title having won their first back in 1987 when they defeated an Ardagh/Legan amalgamation in the final.

This is Carrickedmond’s first appearance in a senior final since 1992 when they lost out to St Helen’s, Drumlish. Playing for St. Helen’s that day was Michelle Hannify (Mulvey) who now plays for Carrickedmond.

Michelle has six senior county medals to her name and won an All-Ireland junior medal with Longford in 1997. She is still putting in fine performances for her club and is one player Killoe will need to watch out in the eagerly awaited county final.

Gemma Fay, who captained Dublin to a Leinster title in 2012, is another key member of the Carrickedmond team. Fay, who played with Ballyboden/St. Enda’s, has won a senior All-Ireland with Dublin and two All-Stars.

Longford player Niamh Feeney was instrumental in Carrickedmond’s win over Killoe earlier in the championship campaign while Sarah Shannon is an accurate free-taker who can score with either her left or right foot.

Lauren McGuire is only 15 but is very speedy and has an eye for goal. She was part of the Longford U-16 team that won the Leinster ‘C’ Championship this year. McCormack sisters Shauna and Caoimhe will also be in action for their club on Saturday.

Carrickedmond have made great strides over the last number of years. They are very strong at underage level and having suffered the heartbreak of losing two Intermediate finals in a row, it was third time lucky back in 2016 when they finally emerged victorious in gaining promotion back to the senior grade.

Standing in Carrickedmond’s way in the quest to win the county title are a Killoe side who have been the dominant force in ladies football for the past 12 years. Before last year they had competed in 11 county finals in a row; winning eight of them including a magnificent four-in-a-row.

There has been some changes for Killoe since their last appearance in the senior championship final in 2016 but they still have a strong panel of players with plenty of experience. Captain Anna McDonnell will want to lead by example on Saturday and is a proven matchwinner.

Edel Quinn is another experienced player Killoe can rely on while Jacinta Brady, who won the player of the match award in starring for Longford in the All-Ireland Junior final in 2016, is capable of making a major impact. But a huge loss for Killoe is Anne Marie Bratten who is working abroad.

Niamh Brady is a young player who has emerged as a real talent for the Killoe side while Emma Doris and Fiona Toher know what it’s like to win championships and have the experience which will be a key element  on Saturday.

Killoe, as always, will be hard beaten but Carrickedmond have made a lot of progress and will be quietly confident of capturing the Alison Smyth Cup after overcoming the title holders Clonguish in the semi-final.