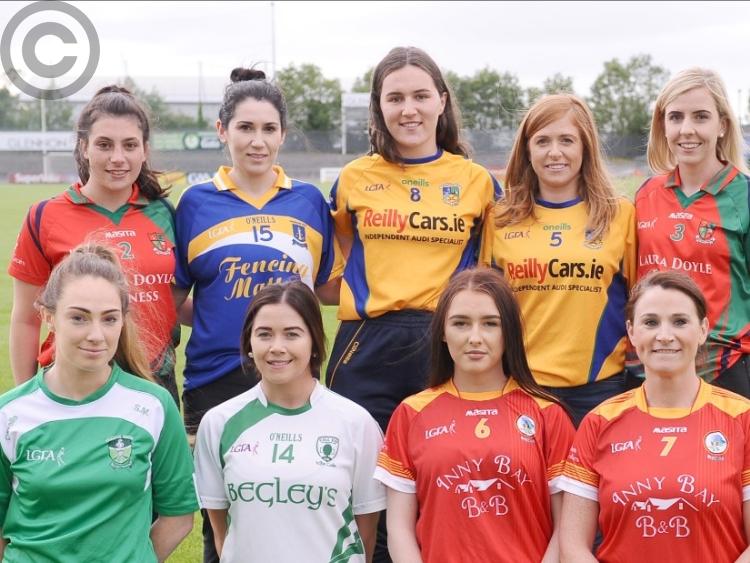 Pictured at the launch of the 2018 Longford Ladies Football Senior Championship are players from Carrickedmond, Clonguish, Dromard, Killoe, Mostrim and the Ballymahon/Forgney/Killashee amalgamation.

First round games in the Senior Championship for the Alison Smyth Cup are scheduled for this Friday evening, June 29. Last year’s Intermediate champions Dromard are in action against Killoe at Pairc na nGael while Carrickedmond confront the Ballymahon/Forgney/Killashee amalgamation at Moran Park. Both games throw-in at 8.15pm.

In last year’s senior championship, Clonguish emerged as the winners of the county title after beating Mostrim in the decider following a replay. Clonguish are the form team again this year, having already won the Division 1 league and the top four competition, and are the favourites to retain the Alison Smyth Cup.

Mostrim were unlucky losers in both the 2016 & 2017 county finals and are putting in a huge development in underage structure but unfortunately has suffered a lot of setbacks recently with injuries and emigration.

Carrickedmond  are making steady progress over the last number of years, winning three back-to-back Minor B titles along with promotion in their league status and just losing out to Killoe in the Gold Cup final a few weeks ago.

Killoe have already won some silverware this year, beating Carrickedmond in the Gold Cup final, and will still be hard beaten with their strong panel of experienced players.

Dromard are a new club to the senior championship after gaining promotion in two consecutive years,  winning the Junior title after beating Mullinalaghta in 2016 and winning the Intermediate title in 2017 after beating Ballymahon/Forgney in the final.

Ballymahon/Forgney are now amalgamated with Killashee and will play in the Senior Championship this year with a good blend of experience and youth and could be a surprise package!

There are only three clubs taking part in the Intermediate Championship this year.  St Helen’s (Drumlish) like Mostrim have lost players to emigration and are regrouping and developing underage with big numbers.

Ballymore has put in huge work over the last few years on development with Gaelic for girls and Gaelic for teens and the blend of young and old might be just enough to push the black and amber across the line in the quest for the title.

Longford Slashers were promoted last year after winning the junior title when they beat Colmcille in the final. After winning five minor titles back-to-back their fine blend of youth and experience might well yield the Intermediate crown.

In the Junior Championship last year’s beaten finalists Colmcille will be trying to make amends and will no doubt see themselves as contenders to reach the decider again.

A new club to the adult competition in their second year, Grattans are a fast young team with no fear and they won the Junior ‘B’ title last year.

Rathcline were relegated this year to Junior status after a lot of their players retired in 2017. They were unlucky not to win the Jones Cup earlier this year after beating favourites Grattans. A very young energetic team, Rathcline could be in contention for championship honours in a closely contested competition.

Mullinalaghta were unlucky not to win the junior title in 2016 when Dromard beat them in a close encounter. They have already collected some silverware this season, winning the Jones Cup after beating Rathcline. A lot of their senior girls retired in 2017 so like a lot of the other clubs in Longford it’s a rebuilding process