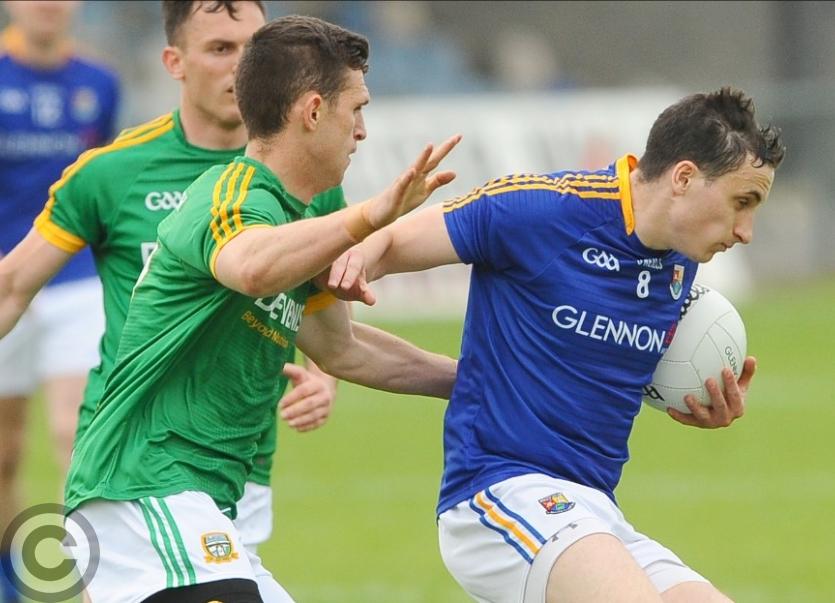 Longford player Darren Gallagher said that they finally got the performance they were capable of producing in their Leinster senior championship quarter-final win over Meath on Sunday last.

“We came into the game having not put too much pressure on ourselves. We were looking for a performance.

“In the last couple of years we have been disappointing in the first round. We have been knocked out and straight into the qualifiers and then we all of a sudden turn it on.

“We knew the performance was in us; just a matter of getting it out of us. That’s what we done against Meath. The lads were absolutely fantastic; everyone to a man just done their job,” commented a very contented Gallagher.

After a nervy first half where Longford made a number of uncharacteristic mistakes they really upped their game in the second half. Gallagher revealed what manager Denis Connerton said to his charges at the break.

“He said to us it has been 30 years since Longford were in the semi-final of the championship.

“His main point was we could be different and to drive it on. We were nervous in the first half; gave the ball away an awful lot which wasn’t like us.

“We turned it around in the second half. We got the few points ahead and it did look dodgy at times but we managed to settle the heads again. Sean McCormack coming on and kicking that last score completely settled us again.”

Sunday’s game was Longford’s first Leinster SFC championship game at home since 2014. For Gallagher and the players it was great to have good vocal home support behind them.

“We are just delighted that the supporters came out to cheer us on. That meant so much.

“You don’t try and get too caught up in it but coming towards the end you could hear the Longford support.

“It gave us a great lift. We don’t always give them too many things to shout about but it was nice to be able to do that on this occasion.”

One of the defining moments of the match was Paddy Collum’s point blank save from Eamon Wallace in the closing stages of the game when Meath were behind by three points.

“If that had gone in it was level and Meath would have been hard stopped then. It was a serious save."

There were many great performances in the Longford team on Sunday last with Gallagher putting in a fantastic shift and scoring three points as well.

The Granard man is humble and shrugs off praise but he was delighted with his contribution.

“These things happen, you can have days like that. Thankfully they went over the bar.

“Some other days they can go agonisingly wide. I was just delighted with the win in what was a real team effort.”