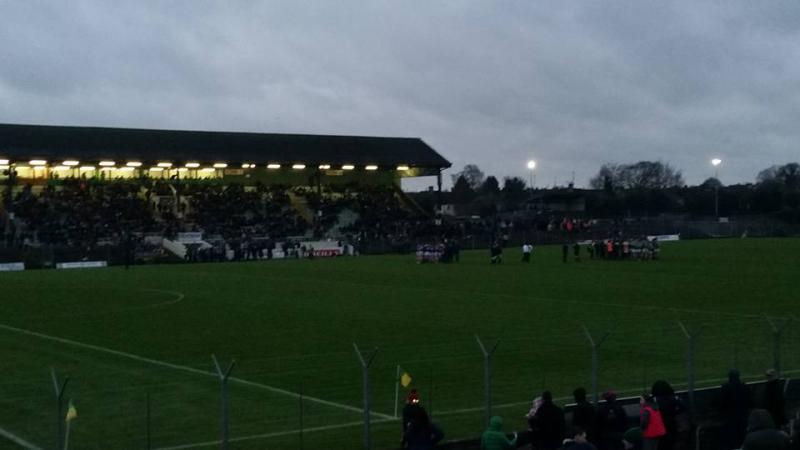 Twitter exploded to life as the first-ever Gaelic football free-taking competition was required at Pairc Tailteann, Navan this afternoon to separate Meath and Longford in the Bord na Móna O'Byrne Cup semi-final.

Meath triumphed in the shootout 2-1, thereby sealing Andy McEntee’s side passage to the final against Westmeath next Sunday.

A last-gasp 1-1 salvo from Longford's Mickey Quinn saw the counties finish in stalemate - 2-16 to 1-19 after extra-time.

However, instead of the semi-final going to a replay, a free-taking competition that saw five players from each side take frees from the 45-metre line from off the ground or out of the hands took place.

With darkness descending on the venue, Mark McCabe and Cillian O’Sullivan were the Royal County heroes as they registered points. Sean McCormack was the only Longford player to find the range in the shoot-out, so Meath went through on a history-making ‘scoreline’ of 2-1.

For the record, the free-taking competition, went as follows:

Meanwhile, in the second semi-final at TEG Cusack Park, Mullingar, it was Westmeath who came out on top in a local derby against Ofaly on a scoreline of 1-9 to 1-7.

Meath pip Longford 2-1 in GAA version of penos in the dark in Navan and @MeathGAA PRO @MrFlynnMeath pumping Bruce's "Dancing in the Dark" over the tannoy. pic.twitter.com/VcGZtT2has

Meath have beaten Longford 2-1 in the first ever free kick shoot out in the history of the GAA. Reaction from Navan on the way #RTEGAA

Meath beat Longford 2-1 (after five shots each) in a free-taking contest in near-darkness. Historical scenes, Jeff

Meath 1-19 Longford 2-16 what a come back from Longford ,game over ....A free kick Competition to decide the game .....awesome heart by Longford.
Never seen this just starting a free kick competition from the 45 “ History “ in the making in the Darkness

If they are going to have a free taking compo then it should be the ABBA format. It's how that the team that goes first has an advantage. Meath went first and won

Just when you think a 45 competition in the dark couldn't get any better... #Meath https://t.co/HKkGiBIrNP

A touch of Cavan in them Meath boys, too cheap to put the lights on!!

MEATH are the first team to win a free-taking shootout in GAA history.

Denis Connerton is very good manager.Despite losing players I'd still be very happy with squad this year. Didnt make game today but not overly disappointed to lose...offaly lge is the big 1 for me.Meath always my 2nd team!Should be a cracker in pearse pk later in the year!

Free kick competition in the dark in Navan after Longford scored 1-1 in last minute of extra time to draw with Meath pic.twitter.com/imty74b1AS

7 from 10 frees missed between Meath and Longford in the shootout maybe give Dean Rock a call for some lessons lads!

Meath-Longford finished at 4:25 (after a 45 metre shoot-out) in near darkness. No floodlights at Pairc Tailteann. Should have quickly painted posts luminous yellow after final whistle.

Another very strong performance by the Longford team against @MeathGAA today Keeping Meath to a draw at the end of extra time in Navan is a great achievement. Well done @OfficialLDGAA @Longford_Leader @shannonsidenews #OByrneCup #GAA

Wow fair play to @OfficialLDGAA for staying with Meath in this game! The game decided on ‘free kicks’ did we ever think we would ever hear of this @offtheball @Longford_Leader @MolloyJoe https://t.co/IL3k12SJ6H