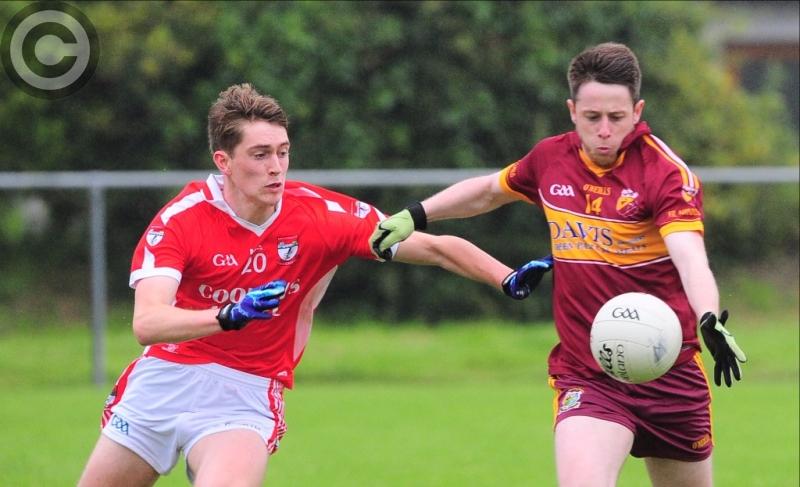 Petie Collum on the attack for Fr Manning Gaels in this tussle with Ballymahon defender Ross Claffey. Photo: Declan Gilmore

Fr Manning Gaels and Ballymahon supporters were left to rue what might have been as the sides finished all square in a low key opening to Group 3 of the Longford Senior Football Championship at Keenan Park, Ardagh on Saturday evening last.

Given the lamentable wet and windy conditions, it was perhaps hardly surprising to see a relatively small crowd  turn out to see the first round clash in this year's senior championship.

And given the prolifigacy of both sides in front of goal throughout, onlookers were left none the wiser as their sides hopes of progressing through to the quarter-finals.

Ballymahon, it could be argued, will feel slightly the more aggrieved having led by three points at half-time while also managing to amass seven wides in the second half.

On the flip side, Fr Manning Gaels might be left scratching their heads especially after a Petie Collum goal and point sandwiched between a fine Martin Cassidy effort left them 1-2 to 0-0 in front within the first ten minutes.

It was a barnstorming start which certainly appeared to have Liam Keenan's charges somewhat rattled.That was until a Colm Flynn free eventually restored some form of parity by the 11th minute.

Little did Flynn, his teammates or those watching from the sidelines foresee that such an intervention would prompt his side into conjuring a purple patch of five unanswered points. Those scores would ultimately come via the boots of Joe Kelly (2), Ross Claffey, John Nevin and Flynn again.

Martin Cassidy did manage a response of sorts moments later but a goal eventually credited to Pedro Byrne right on the stroke of half-time would ensure Ballymahon went in buoyed by a three point cushion (1-6 to 1-3).

The Gaels, under the stewardship of Gowna clubman Gary Donohoe, were well aware of the need to start strongly in the second half.  A sublime Martin Cassidy score and an equally classy finish by Pauric Gill left just a solitary point between the sides after 41 minutes.

Colm Flynn (free) and Fr Manning Gaels shotstopper Paddy Collum (‘45) swapped scores soon after as the contest entered its most crucial stages. Another Flynn free and a left footed strike from Gill meant there was still just the one score in it after 45 minutes of action.

A minute later, Martin Cassidy drew the Gaels level as the Drumlish/Ballinamuck  outfit began to sense a hard fought victory might be on the cards.

However, a fifth free from that man Flynn edged Ballymahon into the lead with just four minutes remaining.

And try as they might to cling onto that slender advantage, a confidently struck point from substitute Eoin Keane in the last minute earned Fr Manning Gaels a draw and it was probably the fairest result.