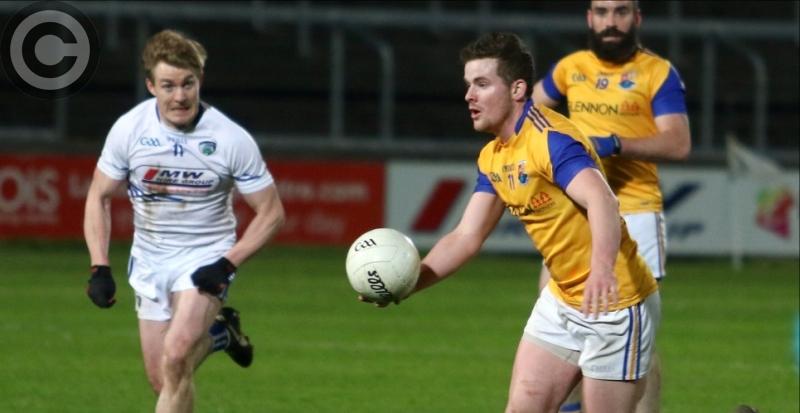 James McGivney pictured in action for Longford against Laois in the National Football League Division 3 game at O'Moore Park back on March 25 with Diarmuid Masterson in the background. Pic: Syl Healy

Now that the dust has settled on the fierce scrap for survival in Division 3 of the National League, the Longford senior footballers are in Leinster Championship action this Sunday and their progress this season will be judged on the result against Laois at O’Moore Park, throw-in 3pm.

While the preparations for the most important match of the year have gone according to plan, with the notable exception of the suspension to key defender Padraig McCormack who is a big loss, Longford have a very poor record in Portlaoise and will be hoping to break that frustrating bogey.

Now in his second stint in charge of the county, Denis Connerton does not need to be told that he is still searching for his first win in the Leinster Senior Championship in his role as the Longford manager following the defeats  in 2002 (v Louth, after replay), 2003 (v Kildare), 2004 (v Carlow) and 2016 (v Offaly).

Connerton will be hoping for a change of fortune but he will be very wary of the fact that Laois are hurting badly from the severe setback of relegation from Division 3, the first time in 50 years that the O’Moore county have ended up in the bottom tier of the National League.

While that was a massive blow with current manager Peter Creedon coming under considerable pressure, Laois are probably now at their most dangerous as they gradually return to full strength and are rated the favourites (4/7) to beat Longford (15/8) if you are to believe the bookies view on the likely outcome.

Towering midfielder Brendan Quigley and rock solid defender Mark Timmons are apparently back in full training after the vastly experienced duo missed the entire National League campaign as they recovered from their respective long term injuries.

Also ruled out of the Division 3 league clash between the counties at O’Moore Park on March 25 were captain Stephen Attride (injured) and Damien O’Connor (suspended) and with home advantage yet again in their favour, the general opinion is that Laois will be hard beaten in the opening round of the championship.

Having said that, there are injury concerns over Donie Kingston (ankle), John O’Loughlin (groin) and Padraig McMahon (quad) but all three are expected to be fit to start on Sunday.

Dealing with the threat of Kingston is going to prove a difficult task for the Longford defence, particularly with Padraig McCormack ruled out, and the powerful Laois attacker will probably be pitched in at full-forward.

That’s the pivotal position that Donie the dangerman operated in the recent league game against Longford and he showed his sheer class in clocking up the impressive total of nine points (six frees) in generally causing havoc as his side eventually emerged victorious on a 1-13 to 0-13 scoreline.

David Conway fired home the cracking only goal in the 47th minute, after receiving the perfect pass from Evan O’Carroll who is another quality forward, while Laois are particularly strong at midfield as the mentors select from John O’Loughlin, Kevin Meaney and Brendan Quigley.

The commanding figure of Meaney could also figure at centre-half-back, with another of their key players Colm Begley switching to the wing, but Laois look vulnerable in the full-back-line with reports suggesting that Mark Timmons will not be considered for a place on the team after enduring such a lengthy inter-county absence following a major operation to sort out his injury problems.

Boosted by challenge game wins over Sligo, Carlow and Clare in the build-up to the championship and the belief that they are considerably better than the poor league form shown in a very disappointing campaign that was badly hampered by injuries, one would expect a fired up Laois to come out with all guns blazing in their bid to shoot Longford down in the match that really matters.

The message is clear for Denis Connerton and his players in that they need to stop Donie Kingston inflicting the same sort of major damage that decided the National League game at the same venue a couple of months ago.

If they can manage to curtail the threat of Kingston, then Longford have a good chance of crossing the first hurdle in the Leinster Championship and if it happens to materialise it will bring great joy to Connerton and the supporters who are sick at watching their county lose at O’Moore Park in the different grades down through the years.

For that to become a reality, Longford will have to improve a lot on their overall performances in the National League this season but it should be pointed out that Liam Connerton (ill) was absent when the county lost to Laois in the Division 3 fixture back at the end of March.

Liam has loads of pace and the ability to pose problems whenever he receives the ball and the Longford attack is potentially lethal with Robbie Smyth and Sean McCormack well capable of getting the crucial scores.

John Keegan and Darren Gallagher could team up at centrefield, with Diarmuid Masterson another option, and a big impact will need to be made in this vital sector to provide the forwards with a proper supply of the ball.

The versatile Michael Quinn might be the choice at centre-half-back in the absence of Padraig McCormack but that remains to be seen as the mentors may opt to start key figure Quinn in the half-forward-line.

With the morale boosted by the warm weather training camp in Portugal over the May bank holiday weekend and subsequent challenge game wins over Louth, Fermanagh and Offaly it must be said that Longford are in good shape and will be quietly confident of making further progress in the Leinster Championship.

Against the odds in the previous first round meeting between the counties at Glennon Brothers Pearse Park back in May 2012, Longford came from six points down at the break to eventually beat Laois by a solitary point, 1-10 to 0-12, with Paul Barden scoring the decisive only goal in the early stages of the second half.

That was sweet revenge for another close encounter at O’Moore Park in the 2011 provincial senior championship round 1 clash in 2011 when Laois hung on for a slender 0-10 to 0-9 success.

And the indications are that there will be very little separating the sides again on Sunday in the battle to determine who earns a crack at newly promoted Division 1 opponents Kildare in the Leinster SFC quarter-final at O’Connor Park, Tullamore on Sunday June 4.