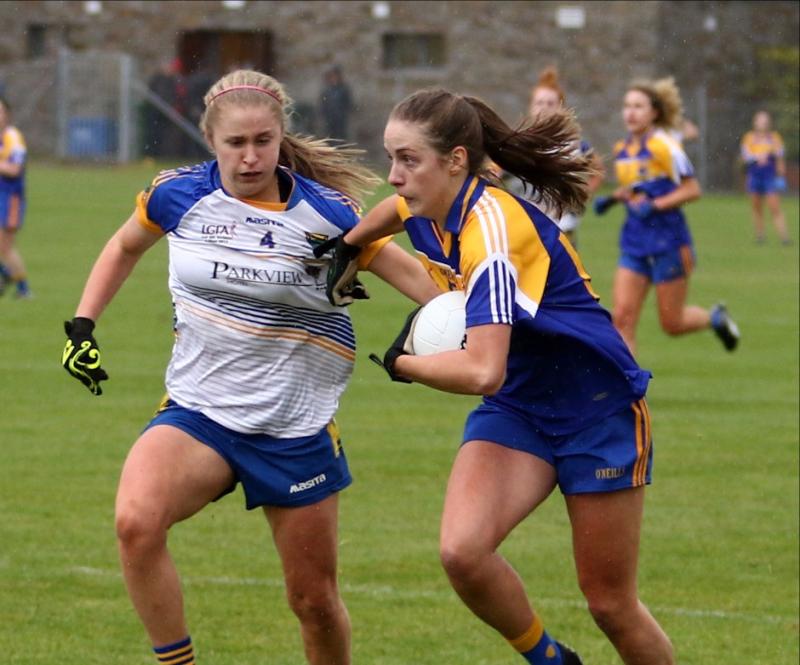 Michelle Farrell on the attack for Longford against Wicklow in the Lidl Ladies Football National League Division 4 Final at the Clane grounds, Co Kildare on Sunday last. Photo: Syl Healy

Second half goals from Sarah Tierney and player of the match Michelle Farrell proved decisive as Longford won the Lidl Ladies Division 4 league title and in doing so have gained promotion back to Division 3 following a hard earned victory over Wicklow in the final at the Clane grounds, Co Kildare on Sunday last.

After capturing the All-Ireland Junior Championship crown at Croke Park last September, it has been a terrific successful spell for Longford after a period of disappointment that saw players leave the county panel, plenty of managerial change and the team being relegated to Division 4.

With Armagh man James Daly now at the helm several former players have made a welcome return to the panel and the ladies have realised their main target for 2017; promotion. The Championship is weeks away and they will hope to be competitive but Intermediate Football will be a big step-up for them.

After going through Division 4 with ease Longford’s toughest game was their final league fixture against Wicklow and the Garden County once again were formidable opponents in wet and windy Clane.

Longford deserved the success but were made work hard for it. It wasn’t the assured performance that they were capable of;  kicking 13 wides, giving the ball away cheaply at times and hitting the crossbar on a few occasions. Wicklow twice cut the gap to two points in the closing stages of the game but when Michelle Farrell scored the second goal for Longford in the 57th minute the league title was won.

Wicklow had the first chance to open the scoring but kicked a wide straight from the throw-in. Longford got the first score of the game in the 2nd minute through Sarah Tierney.

Aisling Reynolds followed up with two points before Wicklow eventually got their opening score through Jackie Kinch. A nice point from Sarah Tierney saw Longford restore their three point advantage in the 11th minute.

Twice Wicklow cut the gap to two but Michelle Farrell responded for Longford; hitting the crossbar for the second time in the 21st minute but the ball went over for a point. She followed that with a free to put four between the sides in the 23rd minute.

Amy Mulhall got a fine point for Wicklow in the 24th minute but just before the break Michelle Farrell was on target again as Longford held a half-time lead of 0-8 to 0-4.

Laura Hogan opened the second half scoring with a pointed free in the 31st minute but Michelle Farrell fired over another free for Longford two minutes later. In the 39th minute Longford got their first goal; substitute Aisling McCormack with the pass to Sarah Tierney and she made no mistake with a powerful finish.

With seven points between the sides (1-9 to 0-5) Wicklow worked hard to get back in the game.

Claire Walsh hit over a free and the gap was just three in the 43rd minute when substitute Katie Miley found the back of the net.

The momentum appeared to be with Wicklow after that goal as Longford began to make mistakes and the revitalised opposition were quick to capitalise. In the 51st minute the gap was just two when another substitute Laurie Ahern was on target.

Longford had possession but hit a number of wides and while Wicklow did have chances the Longford defence stood firm.  Michelle Farrell fired over her fifth point but that was cancelled out by Helena Dowling as the deficit was just two again in the 54th minute.

With time running out both sides went in search of vital scores and it was Longford who struck the killer blow. Michelle Farrell linked up with Aoife Darcy and while Farrell’s  initial effort came off the crossbar she followed up to finish the rebound to the net and there was no way back for Wicklow.