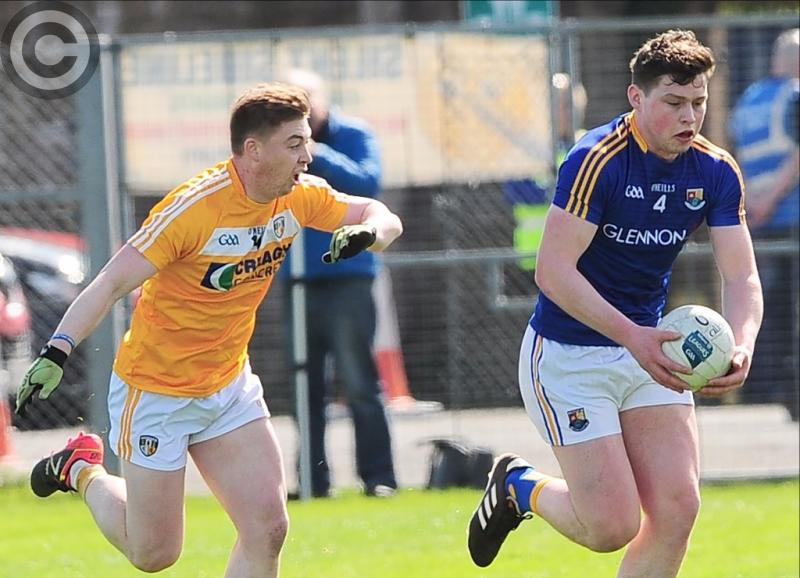 A last gasp point from a pressure free converted by Sean McCormack in the 7th minute of stoppage time earned Longford the draw they needed against Antrim at Corrigan Park in Belfast on Sunday last to secure Division 3 status in the National Football League.

Just as it looked like Longford were doomed to the dreaded drop into Division 4 when CJ McGourty pointed a free to put Antrim ahead with time almost up, the visitors were given the chance to get the equalising score with virtually the last kick of the game and Sean McCormack put the ball straight between the posts.

Donal McElligott had just shot wide before McGourty’s late, late lead point. But Longford showed fierce resilience to launch an immediate counter-attack and earned a free deep into stoppage time. McCormack stepped up and despite the weight of expectation on his shoulders he coolly slotted the ball over the bar. The final whistle then blew and there was jubilant scenes among the players and travelling supporters as Longford avoided relegation.

It was a courageous battling performance from the midlanders who finished the game with 13 men after Andrew Farrell (second yellow card) and Padraig McCormack (straight red card) were sent off in the 49th and 57th minutes respectively.

The first sending off came after Farrell hauled Kevin Niblock down in the square and referee Noel Mooney awarded a penalty and showed the Cashel man a second yellow card. McGourty stepped up to dispatch the penalty past opposing keeper Paddy Collum to close the gap to just a single point.

Longford had claims for a penalty turned down in the 39th minute after Larry Moran was brought down in the square but the referee waved play on.

Antrim defender Declan Lynch landed a point to leave the sides level in the 51st minute. Longford went ahead again with a fine point from captain Michael Quinn and a free from Robbie Smyth after Liam Connerton was fouled.

Longford were reduced to 13 men in the 57th minute after the linesman alerted the referee to something and the Cavan official flashed a red card at the surprised Padraig McCormack.

With numerical advantage Antrim sensed it could be their day.  Longford had a good chance in the 62nd minute but Peter Healy got in ahead of Connerton to clear the danger.

Two frees from McGourty drew Antrim back on level terms in the first minute of stoppage time. Donal McElligott then had a chance for Longford but hit his effort wide while McGourty made no mistake down the other end, edging Antrim ahead to the delight of  the home crowd.

There was still time for  one more dramatic twist and when Longford were awarded a free Sean McCormack struck the ball over the bar to save his side from the disaster of demotion.

It was McCormack who got the opening score of the game; firing over a free in the 2nd minute.  Robbie Smyth then added a second.

Antrim had a chance in the 6th minute but McGourty’s free was caught on the line by Darren Gallagher.

McGourty opened the Antrim account in the 8th minute before a fine Darren Gallagher score restored Longford’s two point advantage. Antrim were level in the 13th minute and a point from Brendan Bradley put them ahead in the 15th minute.

Twice Longford broke but gave away possession in their forward line and Antrim were able to break and got scores from Declan Lynch and McGourty to put them ahead by three by the 18th minute.

Longford though didn’t panic and were level in the 26th minute with excellent points from Barry Gilleran and Sean McCormack along with a Robbie Smyth free. McCormack and McGourty exchanged frees before Longford ended the first half strongly with a fantastic point from Barry McKeon, a free converted by James McGivney and another fine effort from McKeon to give them a three point lead going in at the break; 0-10 to 0-7.

While Antrim had the advantage of the wind in the second half, Robbie Smyth landed another point to extend the Longford advantage in the early stages.

They then had claims for a penalty turned down after Larry  Moran appeared to be bundled over in the  square before Antrim replied when CJ McGourty was on target from a free.

Liam Connerton kicked a nice score in the 43rd minute to restore Longford’s four point lead and then shortly after Antrim keeper Chris Kerr pulled off a fine save to deny Darren Gallagher a goal. From the resulting ’45 Paddy Collum pointed to stretch Longford’s lead  in the 44th minute.

Antrim replied with a point from Matthew Fitzpatrick before they were thrown a lifeline in the 49th minute when they were awarded a penalty and a goal resulted.

The drama continued as this very tense encounter went down to the wire with Longford snatching a draw right at the end.

Denis Connerton’s brave side got the result they needed to consolidate their place in the Division 3 league next season and a big boost for the forthcoming championship campaign with relegated Laois providing the opposition in the Leinster Round 1 clash at O’Moore Park on Sunday May 21.