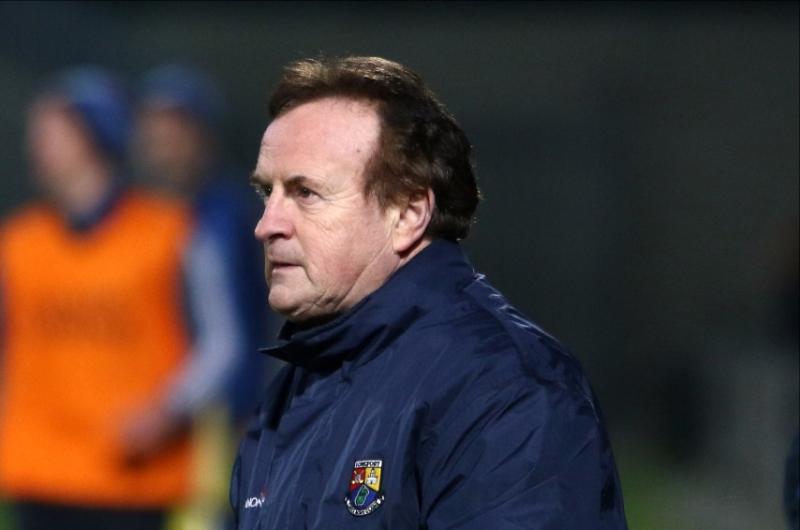 Denis Connerton, the manager of the Longford senior football squad.

A last gasp point from a pressure free converted by Sean McCormack in the 7th minute of stoppage time against Antrim at Corrigan Park in Belfast on Sunday earned Longford the draw they needed to secure Division 3 status in the National Football League.

Just as it looked like Longford were doomed to the dreaded drop into Division 4 when CJ McGourty converted a free to put Antrim ahead after Donal McElligott hit his effort wide, the visitors were given the chance to get the equalising point with virtually the last kick of the game and Sean McCormack put the ball straight between the posts as the county survived due to their superior scores difference.

It was a courageous battling performance from Longford who finished the game with 13 men after Andrew Farrell (second yellow card) and Padraig McCormack (straight red card) were sent off in the 49th and 57th minutes respectively.

After leading by three at the break, 0-10 to 0-7, Longford went ahead by four with a pointed free from Robbie Smyth. Then Larry Moran had claims for a penalty waved away in the 39th minute.

Antrim got back to within a point of Longford by the 43rd minute when Andrew Farrell hauled down Kevin Niblock and the Cashel man was dismissed for a second yellow card offence with CJ McGourty scoring a goal from the resulting penalty.

Antrim drew level twice and went ahead deep into stoppage time through McGourty but with time still to play Longford were awarded a free which McCormack slotted over in a dramatic finish to a very tense match.

Longford started brightly with early points from Sean McCormack (free) and Robbie Smyth. Antrim opened the scoring in the 8th minute with a free from CJ McGourty. Longford restored their two point advantage in the 9th minute with a fine point from Darren Gallagher.

The game then turned in Antrim’s favour and four points in a row saw them go two ahead by the 18th minute. Barry Gilleran and Robbie Smyth (free) got Longford back on level terms and apart from a CJ McGourty free the final five minutes of the first half were dominated by Longford.

Barry McKeon hit over two excellent points while James McGivney converted a free to give Longford a three point lead at the break. It was a tremendous battle in the second half but Denis Connerton’s brave side got the result they needed to consolidate their place in the Division 3 league next season and a big boost for the forthcoming championship campaign.