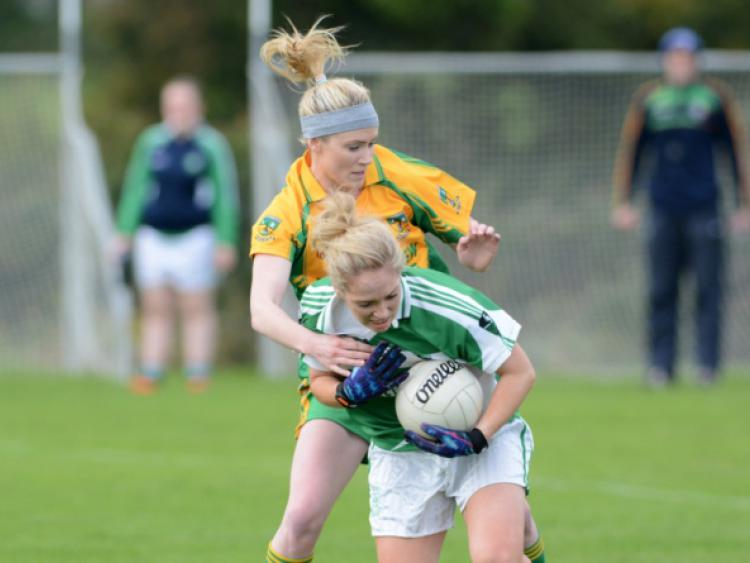 On Saturday last the Longford Ladies Senior champions Clonguish travelled to Stabannon to open their Leinster campaign against the Louth senior champions. Clonguish had to field without the services of their captain Marie Brady, midfielder Siobhan McGowan and corner-forward Cliona Allen from the team that won the County Final.

On Saturday last the Longford Ladies Senior champions Clonguish travelled to Stabannon to open their Leinster campaign against the Louth senior champions. Clonguish had to field without the services of their captain Marie Brady, midfielder Siobhan McGowan and corner-forward Cliona Allen from the team that won the County Final.

Playing with the wind in the first half, Clonguish got off to the worst possible start when nippy forward Danielle Sharkey palmed the ball to the net in the opening minute to give Stabannon an early lead. But the Clonguish Ladies responded well to this setback rattling off six unanswered points from Aoife Darcy (5) and Aishling Greene between the 3rd and 14th minute.

After this period of dominance Stabannon caught the Clonguish defence napping to strike for their second goal, again by Danielle Sharkey to draw the game level. By the 16th minute Aoife Darcy and Alice Magan restored the Clonguish lead by scoring a point apiece from play in the 18th and 19th minutes.

A pointed free scored by Stabannon’s Jenny McGuinness reduced the lead to the minimum but Aoife Darcy, who tormented the Stabannon defence throughout the game, found the net with a superb goal after a great outfield movement started off by Mairead Moore who surged up the field on one of her mazy solo runs. Aishling Greene added a further point from play to leave the score at half-time: Clonguish 1-9 Stabannon 2-1.

Stabannon, with the aid of the breeze in the second half, started to dominate play and began to whittle away at the Clonguish lead. Matters were not helped when Clonguish had a player sin binned and another red-carded for indiscretions. At one stage Clonguish were playing with only 13 players. However, with sterling defence Clonguish kept the Stabannon onslaught at bay for most of the second half.

Tiredness began to set in and by the 59th minute of the second half Stabannon had edged ahead by one point. Undaunted, Clonguih refused to die and typified their determination when Caitriona Moore blocked down Jenny McGuinness in front of goal. The ball was subsequently worked up the field to Aoife Darcy who levelled the score with time almost up.

The referee however still had some time to play. From a Stabannon attack on goals, Niamh Darcy plucked the ball off the goal line and worked it out of the defence to Aoife Darcy who went on a solo run before she was finally pulled down 30 yards from the Stabannon goal. Darcy duly slotted the resulting free over the bar to edge the Clonguish ladies ahead. On the kick-out the final whistle sounded much to the jubilation of the Clonguish team and supporters.

Goalkeeper Jessica Stewart was steady throughout and made one particular superb save in the first half. Anne Kavanagh, Mairead Moore, Sinead Macken, Caitriona Moore, Ailbhe McGowan, and Niamh Darcy were all solid in defence while Alice Magan had a tremendous game at midfield, plucking the ball out of the air on several occasions.

Aishling Greene and Oonagh Shanley put in hard graft in the forward line. But undoubtedly the star of the show was Aoife Darcy who finished with a personal tally of 1-8 (1-5 from play). Lynn Gregg, Maria Kelleher, Doireann McCarthy and Aoife Gordon as well as substitutes Maria Gordon and Clodagh Coppinger all played their part in this hard fought victory.

The Clonguish ladies now progress to the Leinster semi-final where they take on the Offaly Senior champions, Naomh Ciaran, with the fixture scheduled for Allen Park on Saturday next, throw-in 2pm.