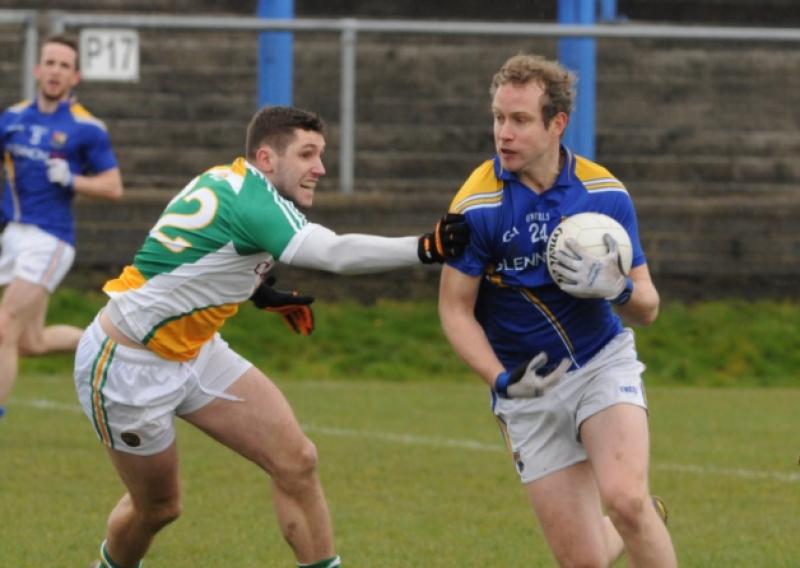 While Longford got the win they needed to gain promotion to Division 3 of the National Football League next season and a lot of credit goes to team manager Jack Sheedy for delivering on that promise, this was a terrible game littered with several mistakes as Offaly ended up with 12 players on the pitch.

While Longford got the win they needed to gain promotion to Division 3 of the National Football League next season and a lot of credit goes to team manager Jack Sheedy for delivering on that promise, this was a terrible game littered with several mistakes as Offaly ended up with 12 players on the pitch.

It must be said that the faithful county were the victims of a very poor performance by Kildare referee Brendan Cawley and another spoiler was the very unpleasant wet and windy conditions at Glennon Brothers Pearse Park on Sunday last, making the conditions extremely difficult.

And it was not until the closing stages that Longford eventually took advantage of the significant numerical advantage with influential substitute Ross McNerney making the desired impact - firing over three points to clinch the hard earned victory.

With Offaly down to 13 players after full-back Paul Mc Conway (27 mins) and midfielder Graham Guilfoyle (49 mins) were sent-off, the home county survived a very lucky escape in the 54th minute when Bernard Allen (put through by Niall McNamee) had a glorious chance of a goal but his close range shot was well saved by Paddy Collum.

Offaly also squandered three other chances during this period and it was then Longford’s turn to shoot a couple of wides before the introduction of Ross McNerney settled the issue.

McNerney was just moments on the pitch when he kept his composure to convert a free, following a foul on Michael Quinn. and then the county U-21 player immediately landed a cracking point from play.

A further brace of frees followed from Brian Kavanagh and Dromard clubman McNerney as Longford made certain of their place in the Division 4 league final at Croke Park on Saturday April 25th (5pm), the curtain-raiser to the Armagh v Fermanagh Division 3 decider.

Offaly’s tale of woe was complete when they had a third player, Niall Smith, dismissed for a second yellow card in the 69th minute but they battled it out to the bitter end with Niall McNamee (free) getting a consolation score deep into stoppage time.

Their manager Pat Flanagan was obviously not a very happy man in the aftermath of this calamity situation and they now head into their final fixture at home against fellow promotion contenders Antrim (locked on nine points apiece) in Tullamore on Sunday next, needing at least a draw to earn another crack at Longford.

With the counties also clashing in the opening round of the Leinster Championship at O’Connor Park on Saturday May 16th, there will certainly be a real cutting edge in that eagerly awaited showdown.

So with a game to spare Longford have succeeded in making an immediate return to Division 3 of the National League after getting relegated last season. Thus there is absolutely nothing to play for in the final round at Dr Cullen Park on Sunday next against Carlow who crashed to a disappointing defeat at home to Leitrim last weekend.

Promotion has been achieved, which was the target at the start of the season, but Longford will probably be anxious to extend their unbeaten run in the league, which now stands at six games, and keep the momentum going before the trip to Croke Park for the title decider against Offaly or Antrim.

An attendance in the region of 600 braved the adverse weather on Sunday last to watch Longford win and it must be said that Michael Quinn was a real driving force in the push to get over the line.

Quinn figured most prominently with his willingness to win vital possession and while Ross McNerney got the crucial late scores, another forward Paul McKeon also made a vital contribution to the victory with four points (two frees) to his credit.

And it was pleasing to see a senior debut for promising U-21 player Liam Connerton, replacing Sean McCormack in the 54th minute.

Offaly looked the sharper side when they had all their 15 players on the pitch with right-corner-forward Bernard Allen going close to scoring a goal as early as the 2nd minute and he was most impressive in the first half.

Allen was a constant threat, clearly reflected in the five points (two frees) he scored, and the visitors ended up leading by the minimum of margins at the break, 0-7 to 0-6.

Their other two scores came from Niall McNamee, the second a terrific strike from a tight angle, while Paul McKeon fired over a brace (free and play) for Longford with Francis McGee, Sean McCormack and Brian Kavanagh (two frees) also on target in the first half.

Starting without the injured Barry McKeon, Longford then lost full-back Barry O’Farrell who was forced to retire with only 11 minutes gone in the game after sustaining a knock.

But Offaly suffered a severe setback when key defender Paul McConway received a straight red card (on the advice of the linesman) in what appeared to be a case of mistaken identity after Michael Quinn was grounded with a blow in the 27th minute.

A minute into the second half Offaly defender Johnny Maloney surged forward to fire over a point to leave his side 0-8 to 0-6 ahead but immediately Fergal Battrim (the replacement for the injured Barry O’Farrell) went through a gap in the opposing defence on his way to getting a fine point.

A great score from Paul McKeon left the sides all square in the 41st minute, only for Eoin Carroll to shoot over the bar when a goal was there for the taking for Offaly in the 43rd minute with the unmarked Bernard Allen inside.

Ronan McEntire was then dismissed for a black card in the 49th minute (to be replaced by Shane Doyle) but moments later Offaly suffered a real shattering blow when Graham Guilfoyle (playing really well at centrefield) was sent-off after receiving a second yellow card.

A minute later Paul Mc Keon converted a free to level matters again (0-9 to 0-9) and it was always going to be a real uphill battle thereafter for the 13 men of Offaly who were outscored 0-4 to 0-1 during the remainder of the match.