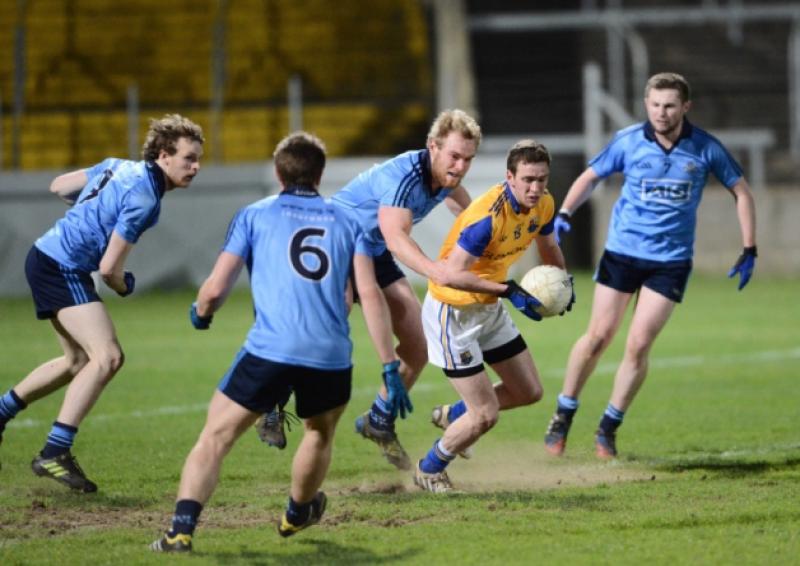 Shattered by a terrible start which left them trailing by 2-2 to 0-0 with just 12 minutes gone in the game, Longford were always fighting a losing battle against a much superior Dublin team in the Leinster U-21 Football Championship semi-final at O’Moore Park in Portlaoise on Wednesday night of last week.

Shattered by a terrible start which left them trailing by 2-2 to 0-0 with just 12 minutes gone in the game, Longford were always fighting a losing battle against a much superior Dublin team in the Leinster U-21 Football Championship semi-final at O’Moore Park in Portlaoise on Wednesday night of last week.

Jack Sheedy’s side were a nervous wreck in the first quarter of the contest with Paul Mannion (one of several Dublin seniors in action for the U-21s) inflicting most of the damage to fire home the killer goals in the 10th and 12th minutes and the wide margin of ten points separated the sides in the finish.

The red-hot favourites Dublin were playing against the strong wind in the first half and while Longford were in deep trouble when they trailed by 2-4 to 0-4 at the break, they showed a lot of character in making it more difficult for their highly rated opponents on the changeover.

When Robbie Smyth fired over his fourth free in the 47th minute, Dublin held the same six-point lead and did not score their third goal until the 56th minute when substitute Emmet O Conghaile burst his way through to finish the ball to the net.

The final score of the game was the direct result of a poorly taken free by Barry McKeon that was intercepted by Eric Lowndes who released the ball quickly into Conor McHugh and he found O Conghaile with the perfect pass to complete Longford’s tale of woe.

It must be said that it could have been even worse for the midlanders as Dublin squandered a number of other clear-cut goal chances during the course of the game and were quilty of some very poor finishing indeed as they kicked a total of twelve wides - eight in the second half.

Longford, on other hand, shot five or six wides but were unable to find a way through the rock solid Dublin defence for a badly needed goal with the very tightly marked Robbie Smyth failing to make his usual big impact at this level - as he had done in the wins over Westmeath and Laois.

While the Longford U-21s deserve a lot of credit for getting his far and were playing their fourth game in this year’s Leinster Championship, this was a big step up in class and so it proved much to the bitter disappointment of their supporters at O’Moore Park last week.

And with Dublin having a decisive edge at centrefield through the powerful pairing of Patrick O’Higgins and Shane Carthy, a shock result was never going to materialise as Dessie Farrell’s charges gained revenge for the sensational defeat they suffered against Longford at the quarter-final stage last season.

Even without the long term injured Ciaran Kilkenny, they should still be good enough to beat Meath in the provincial U-21 title decider with such quality forwards as Paul Mannion, Cormac Costello and Eric Lowndes leading the charge.

Mannion and Costello scored 2-5 between them in the comprehensive win over Longford and it took a terrific save by keeper Gareth Higgins to keep out a point-blank shot from Conor McHugh in the 13th minute as Dublin continued to run riot in the first half.

The early points came from Costello and Lowndes (the playmaker on the ‘40’) and Longford, totally lacking in ideas up front, had to wait until the 15th minute for their opening score when Paddy Kiernan fired over a very good effort from open play.

Back came Dublin with a point apiece from Mannion (20th minute) and Costello (24th minute) but Longford produced a strong finish to the first half that yielded three points on the trot through Robbie Smyth (two frees) and Barry McKeon, the latter landing a fine strike from play in stoppage time.

The second half was just 20 seconds old when Paul Mannion shot wide from close range to miss a glorious opportunity of completing a hat-trick of goals. However, Dublin extended their commanding advantage in adding another two points to their tally - Cormac Costello converting a free while Conor McHugh was on target from play in the 37th minute.

But spirited Longford refused to give up and while they enjoyed quite a lot of possession for a sustained spell they struggled to get scores. The best they could do was a couple of frees converted by Robbie Smyth, the second in the 47th minute after he was fouled.

That was as good as it got for Longford and after Smyth missed a free and a good opportunity to apply a bit more pressure, Dublin hit back with a point from Cormac Costello in the 55th minute and a goal quickly followed from Emmet O Conghaile to put the issue beyond all doubt.

Longford were now completely demoralised and were fortunate not to concede a couple of more goals in the closing stages as ruthless Dublin surged forward in search of further scores.

Cormac Costello shot wide when well placed to find the back of the net while the so dangerous Paul Mannion got clean through again in stoppage time. But Mannion shot tamely at opposing keeper Gareth Higgins, who made a comfortable save, and Longford must have been relieved to hear the sound of the final whistle after suffering a dose of reality.