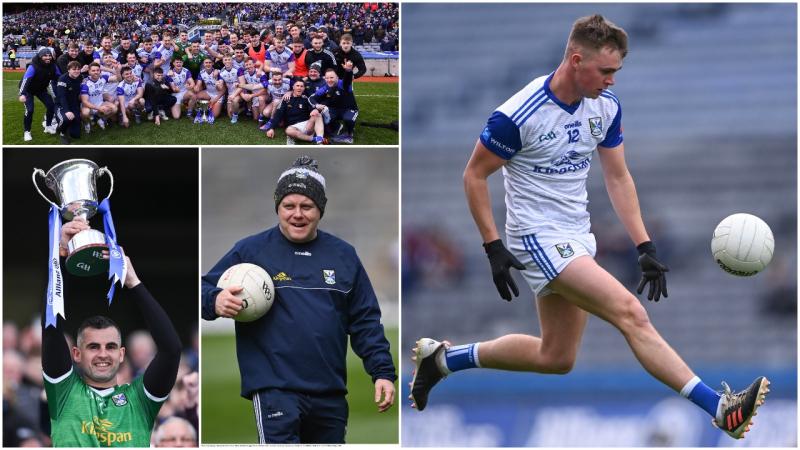 Silverware won in Croke Park is always special and the honours went to Mickey Graham's Cavan charges this afternoon as they overcame Tipperary by a single point, 2-10 to 0-15, in a highly entertaining Allianz National Football League Division 4 decider.

Cavan lost to Tipperary by four points in Kingspan Breffni during the round robin series of league games but the 2020 Ulster champions turned the tables on the 2020 Munster champions today. 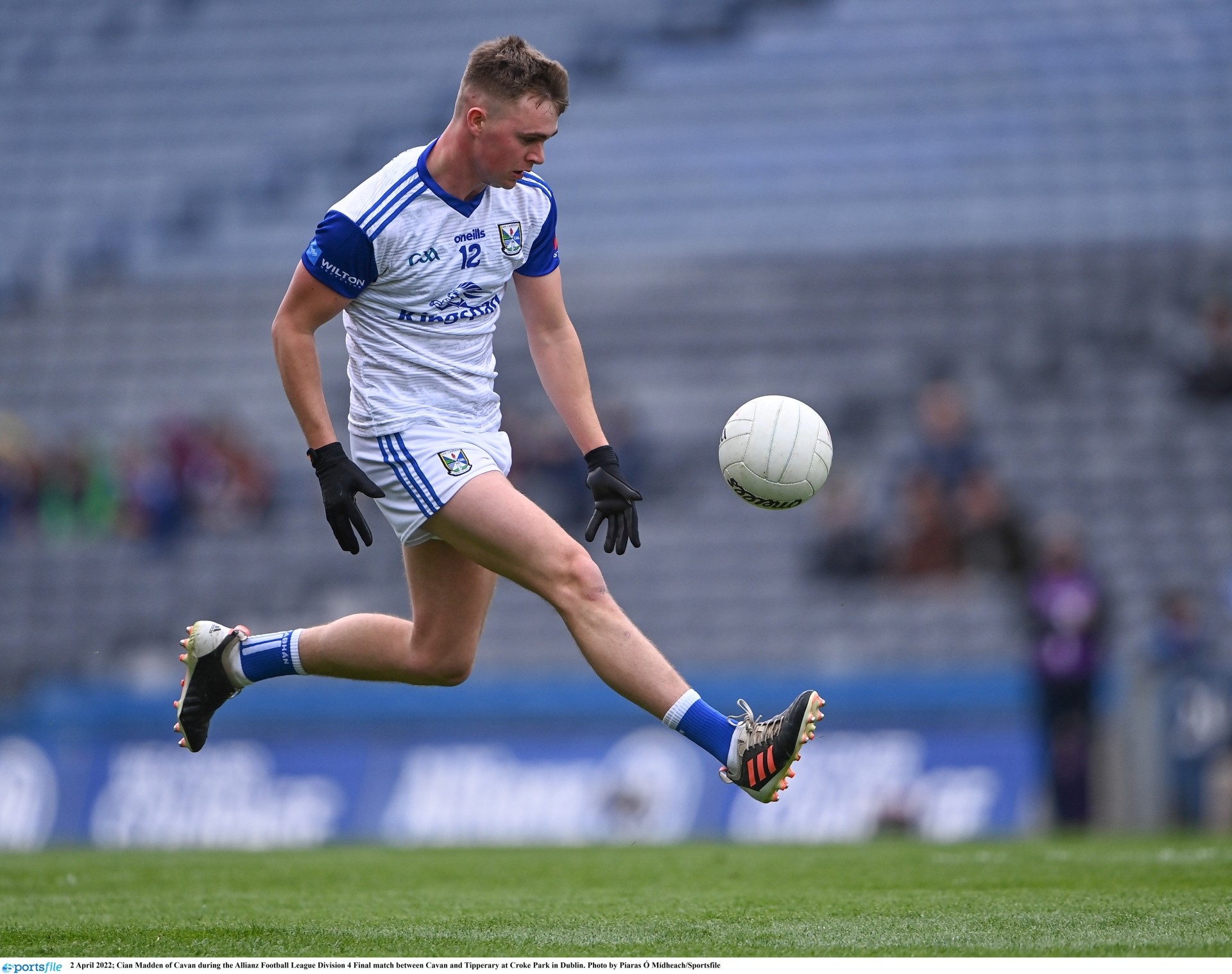 These counties met in an eventful All-Ireland championship senior semi-final way back in 1935, a game won by a last-gasp goal by Cavan's Jimmy Smith. The stakes at Croke Park today may not have been as high for either side, with promotion already in the bag, but this game was almost as dramatic.

The sides were level nine times throughout a contest that started as a cagey, tight affair, with the emphasis placed firmly on defensive strength on a bright, cool afternoon in Dublin 3. Both sides got bodies behind the ball whenever the other was in possession, with each relying on moments of creativity to carve out scoring opportunities.

However, as the second half unfolded the play became more open and stretched, resulting in a much more entertaining spectacle for the attendance of approximately 6,000.

As minds and bodies tired following the exertions of a busy, demanding campaign over the last month and a half, Tipperary lost possession around the middle of the field on a few occasions in the last quarter, fatally so in the 62nd minute, when Cavan counter-attacked with real purpose and Paddy Lynch rolled a low shot to the net for his and his team's second goal.

That made it 2-10 to 0-13, but Tipp weren't done for yet. A converted Conor Sweeney free two minutes later gave them a fighting chance of mounting a comeback, and with a few placed balls from Cavan goalie Raymond Galligan within striking distance of the posts failing to extend their lead, Tipperary still had a glimmer of hope

With so many players deployed in defence, Cavan created a fortress that ultimately proved impenetrable. However, Tipperary's big moment arrived in the third of five minutes of injury time, when Stephen Quirke collected Teddy Doyle's pass and unleashed a thunderbolt of a shot that crashed off the underside of the crossbar, struck the goal line and was scooped up by a Cavan pair of hands before the Ulster team were awarded a free.

It was cruel luck, but these things happen when it isn't your day. 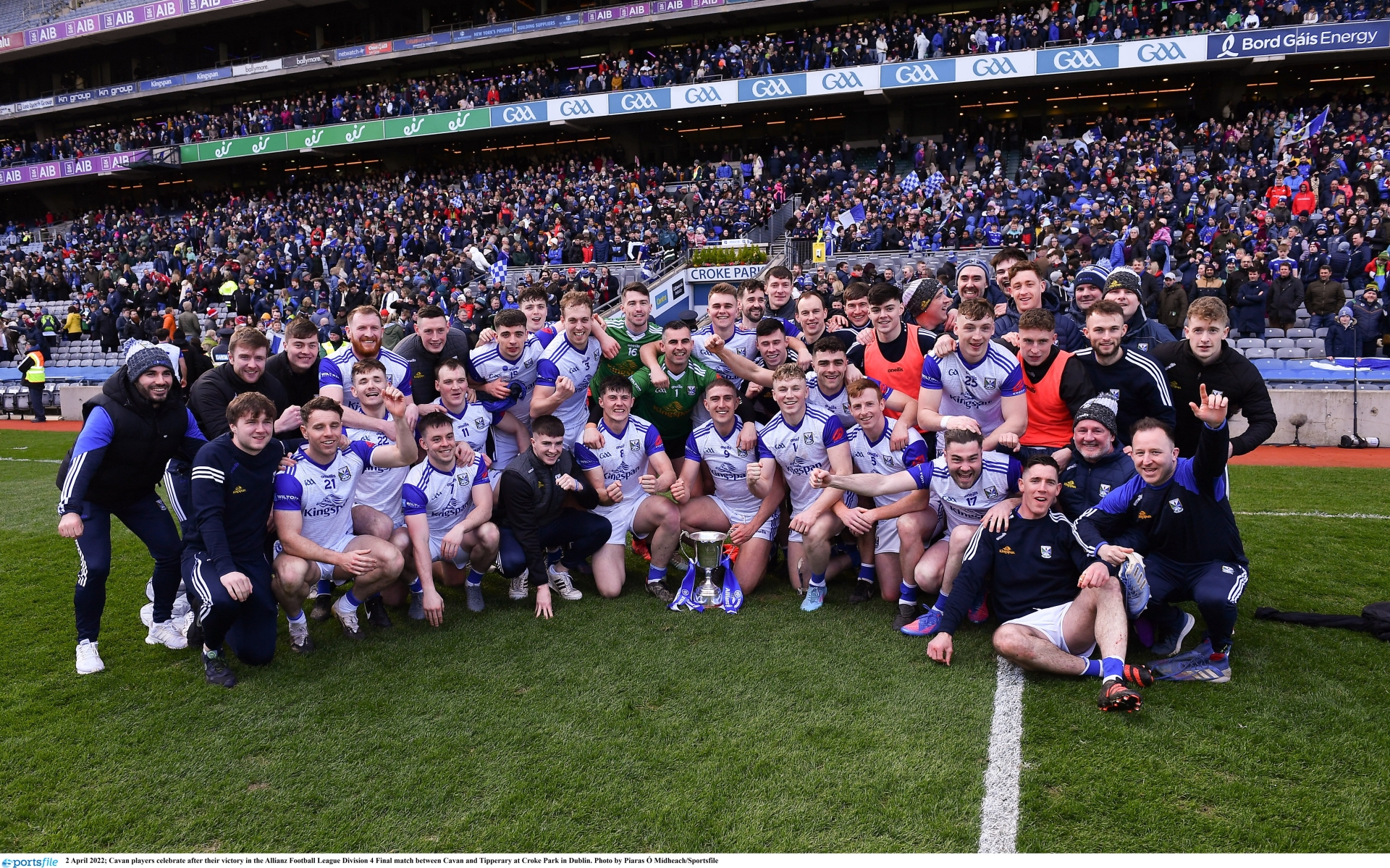 An accurate Conor Sweeney free with just under a minute left kept the issue in doubt right until the final whistle, but after Kevin Fahey had an effort blocked and Cavan were awarded a free, their brave race was run.

It has been a rollercoaster ride for both counties in the last few years, rare provincial titles won at the tail end of 2020 followed by relegation to the league's bottom tier and then promotion at the first time of asking.

With both teams already assured of promotion to division three, they were allowed the freedom to throw off the shackles and express themselves in the second half, after a stodgy opening period.

Cavan's goals were worth their weight in gold to the Ulster team. While they didn't manage to find the net, Tipp had a glimpse of goal three times in the first half, as well as Stephen Quirke's late, fierce drive that struck the woodwork.

They first went close inside the opening minute when Mark Russell was denied by Conor Moynagh's tackle, before the same player gave Cavan the lead, a score that was answered by Conor Sweeney's free. In the seventh minute Mikey O'Shea, when released by Conor Kennedy's final pass, hooked a shot over the bar when he had a sight of goal. 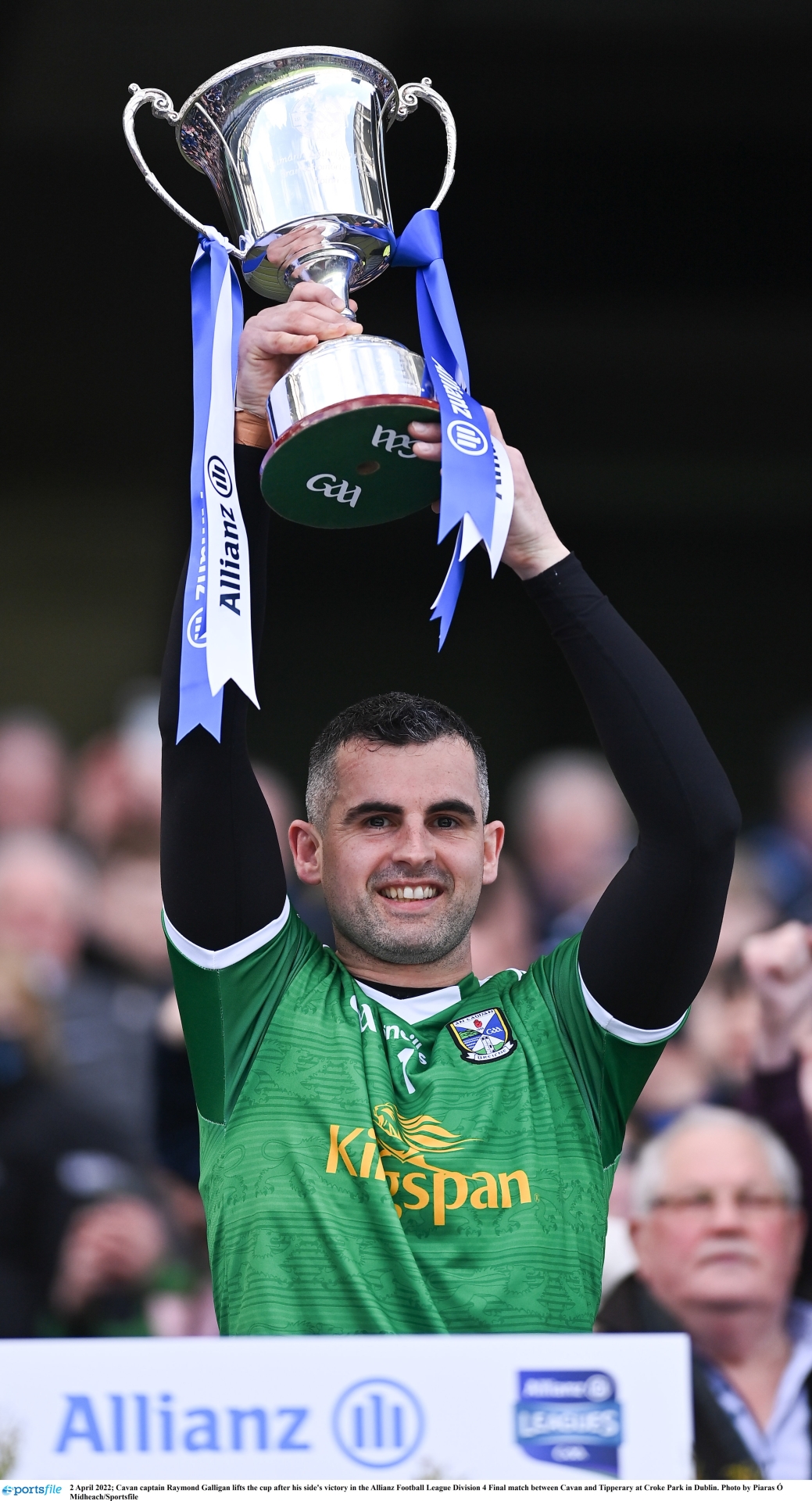 Then Teddy Doyle, not long after he had kicked an excellent point near the 45 metre line, intercepted a Cavan pass before feeding Conor Sweeney, who picked out Timmy Maher with a pinpoint delivery. But the Loughmore player was smothered by the Cavan rearguard and couldn't finish.

Within an instant Cavan had broke and Paddy Lynch drilled a shot to the corner of the net past Michael O'Reilly's outstretched hand to make it 1-4 to 0-3.

Missing the opportunity to get a goal that would have put them two points ahead, Tipp conceded a major instead to find themselves four points in arrears in the 24th minute.

However Tipp seized control after that, kicking the next four points through Mark Russell (0-2), Jack Kennedy (a free kicked from the ground) and Russell again to level the scores. Cavan wasted a good chance of a goal when Luke Fortune sliced a shot wide, although goalkeeper Raymond's Galligan 45 - their first score in 16 minutes - edged them in front by 1-5 to 0-7 at the interval.

Buoyed by a pep talk from captain Conor Sweeney on the pitch before the game resumed, Tipp were quick off the mark at the beginning of the new half, despite facing the breeze. They regained the lead by the 39th minute, thanks to Sweeney's rising shot that cleared the crossbar and Mikey O'Shea's point set up by Bill Maher's incisive run. 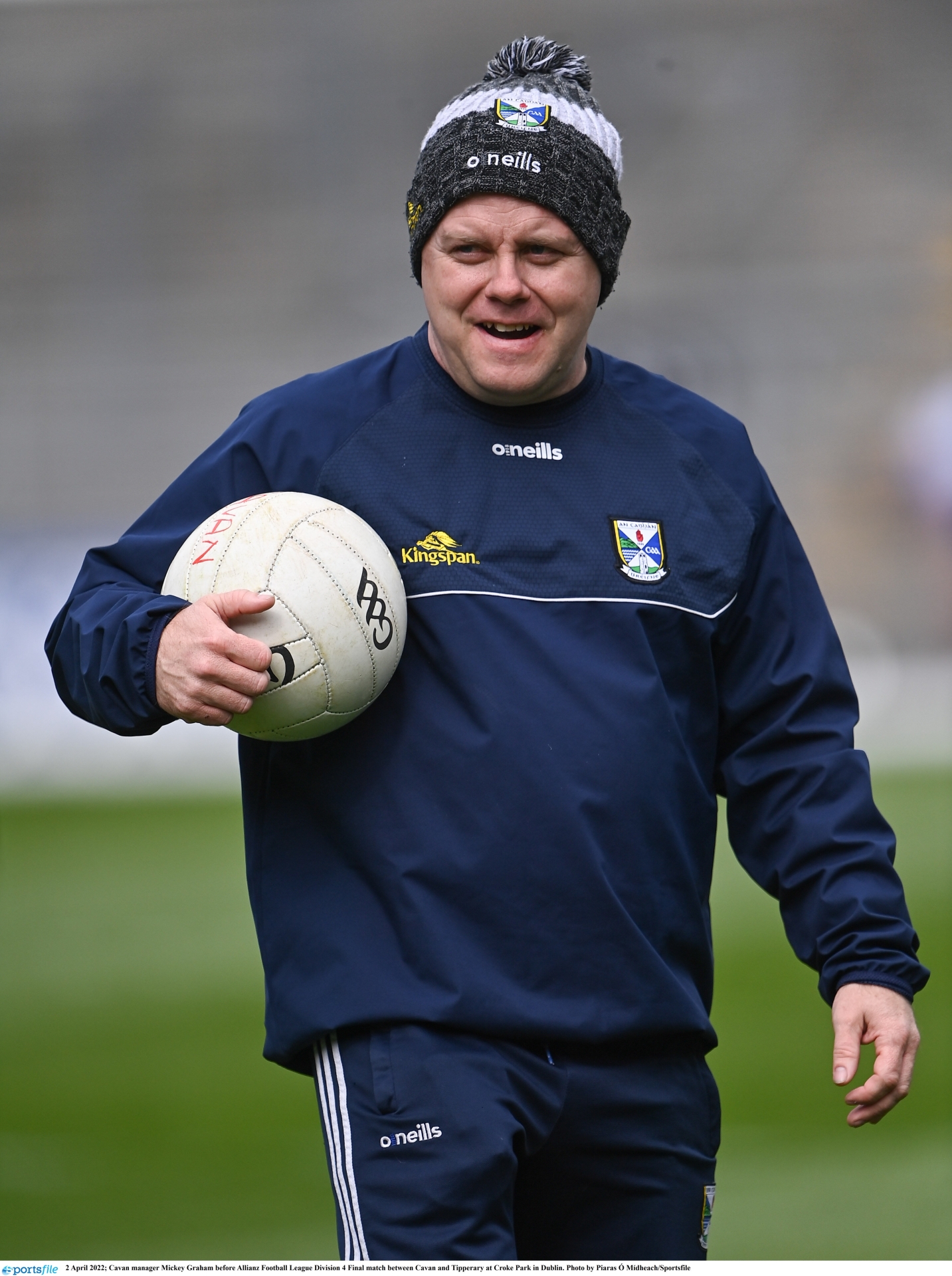 The lead switched hands on a few occasions before Tipp, who were now in the ascendancy, opened up a two-point gap by the 55th minute, courtesy of points from Mark Russell and then Kevin Fahey, whose score was confirmed following Hawkeye's intervention.

However, just when it looked as if they might kick on for home, Tipp were drawn back into a late scrap in which Cavan just got the verdict to clinch their first senior trophy at Croke Park in 70 years.