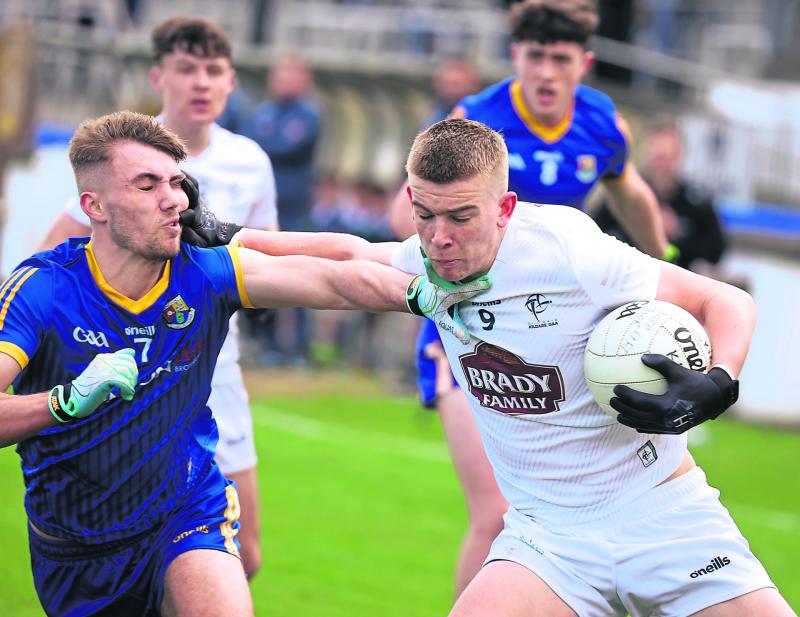 Cian O'Reilly on the ball for Kildare in this tussle with Longford opponent Jack Belton. Action from the Leinster Minor (U-17) Football Championship Round 2 clash

Longford minor footballers are through to the knockout stages of the Electric Ireland Leinster Minor Football Championship 2022 despite suffering a 1-8 to 2-12 second round defeat away to Kildare in St Conleth's Park, Newbridge, this afternoon.

Gareth Johnston’s Longford charges led by a goal at the break, 1-4 to 0-4, but with the strong wind at their backs Kildare were the dominant side the second half.

An early point on the resumption from Ben Ryan followed by a penalty goal from Ben Loakman set up the Lilywhites and while this plucky and decent Longford side were level on 48 minutes, it was Kildare who kicked on, albeit with the  help of a second converted penalty from the same Loakman, along with some excellent point taking.

The final score line may seem a bit harsh on Longford but no doubt Kildare deserved to chalk up their second successive win.

With Offaly defeating Meath, also this afternoon, 3-6 to 2-8, it puts The Lilies in a very strong position before they take on Meath in their final group game, in two weeks time.

So resilient Longford minors master Meath in the Leinster championship

The so resilient Longford U-17 footballers overcame the significant setback of playing most of the final quarter of the game with 14 men to score a great win over the reigning All-Ireland minor champions Meath at Glennon Brothers Pearse Park on Saturday last.

However, Meath have lost to both Offaly and Longford, and no matter what combination of results emerges in the last round, they will be gone under the head to head rule if not on points alone. See the full Leinster Minor Football Championship format HERE