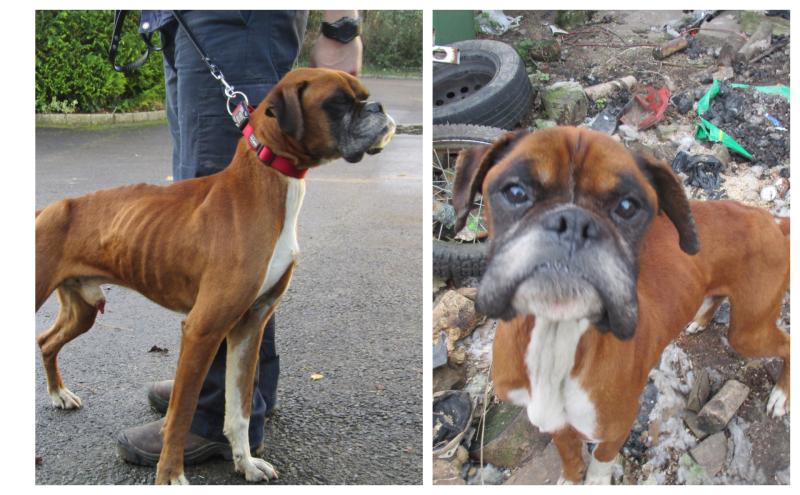 Boxer dogs, Ace and Artie, rescued the dogs by an ISPCA Inspector from horrendous condition on a Kildare property in January 2017.

A pair of boxer dogs—named Ace and Artie, who received the veterinary treatment and rehabilitation they desperately required at the ISPCA National Animal Centre in Co Longford, have been adopted together and are settled into their perfect new home.

An ISPCA Inspector rescued the dogs from horrendous condition on a Kildare property in January 2017.

“Ace, the older dog, took a bit longer to relax but now is a lovely family pet,” said the dog’s adopter, Jim. “Artie has always been a bit more energetic, and needed to learn how to settle a bit. Now they are both in great form, and doing incredibly well.”

Ace and Artie love getting out for walks, and are extremely friendly around people. The two dogs are inseparable after all they have gone through, and depend on one another in their new home.

“They miss each other terribly if one is away at the vet,” said Jim.

They always have a big, doggy welcome when Jim comes home, and even “talk” to him sometimes. He describes them as a “wonderful contribution to the family.”

Earlier this week a man was sentenced to eight months imprisonment and fined €5,000 after being convicted of animal cruelty offences against Ace and Artie.

Also read: Debut album in the works for Longford's Brave Giant in 2019

The case originated after an ISPCA Inspector visited a Co Kildare property in January 2017 and discovered Ace and Artie in an extremely poor physical state and living in deplorable conditions.

The ISPCA immediately seized both dogs and transported them to the National Animal Centre in Co Longford where they received the veterinary treatment and rehabilitation they desperately required. The dogs were extremely emaciated and upon examination a vet confirmed that they were suffering from severe malnutrition with their ribs and vertebrae visibly protruding.

Ace had lesions along its back and hind legs, severely overgrown nails, and the tip of his tail had been damaged and was bleeding intermittently. Artie had dark discharge and scabs on its ears, its teeth were worn down and there was also evidence of chronic gingivitis.

Veterinary Surgeon Ann Neville outlined the condition of the dogs to the court, describing the animals as “near death”. Photographs taken at the time were handed into the court for consideration by the Judge.

Judge Desmond Zaidan imposed two consecutive four-month terms of imprisonment (eight months in total) and fined Mr Cross a total of €5,000 with twelve months to pay. He also awarded the costs of the investigation in the sum of €2,400, including veterinary costs, to the Minister.

ISPCA Chief Inspector Conor Dowling said: “The conditions these dogs were kept in was simply shocking.  There is no excuse and failure to provide the basic level of care for these dogs was just not acceptable and will not be tolerated. The ISPCA and we will do all that we can to improve the welfare for all animals in Ireland and members of the public should continue to report animal welfare concerns to the ISPCA by contacting the National Animal Cruelty Helpline on 1890 515 515 or report cruelty online in confidence.”

Ace and Artie made a full recovery in ISPCA care before they went to their new home.

This is one of a number of cases involving the cooperation between the ISPCA and the Department of Agriculture, Food and the Marine.

The ISPCA would like to remind pet owners of their legal responsibility to provide for the welfare needs of the animals in their care under the Animal Health and Welfare Act 2013.

If you can support the ISPCA by making a regular donation, please visit their website here.