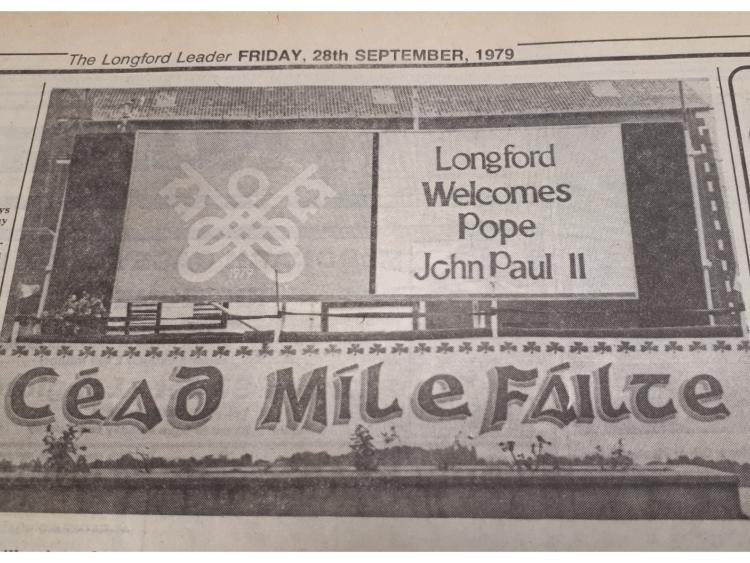 This story is reproduced from the Longford Leader 39 years ago in relation to a welcome sign that was created locally to greet Pope John Paul II.

"The illuminated welcoming sign for the Pope was officially 'switched on' on Monday evening. Fr Colm O'Reilly broke off from the religious procession from the Cathedral for a few moments to switch on the sign.

The huge double sign mounted over the words 'Céad Míle Fáilte', bears green words of welcome on a white background and the Celtic symbol of shamrocks interwoven among the Papal Keys.

It was commissioned by the Chamber of Commerce.

Since the sign was erected on Sunday evening much interest has been shown in it with people constantly stopping at the Market Square to admire it.

Graphic signs managing director, Danny Costello, who made the sign, is delighted with the finished product.

“The whole team worked very hard over the past week in making it one of the best signs we have produced”, he said.

“And without their willingness and determination we would never have produced it at such short notice”, he added.

Danny and his staff feel deeply honoured to have contributed something to the Pope's historic visit.

“We are deeply honoured and flattered to have been commissioned to produce the sign”, Danny, Longford's only sign manufacturer said.

“And we hope it will contribute enormously to the spirit of the event”, he added.

Chamber President Pat Stenson, is also delighted with the sign.

“We feel it is very fitting to such a memorable event and we are particularly grateful to Danny Costello for the work he and his staff put into it”, he said.

“And I was told by a man who drove from Limerick yesterday that he saw nothing as good in any town on the way to Longford”, Pat added.

Fr Colm O'Reilly, Adm, who arranged with the Chamber of Commerce that the sign be erected in the Market Square, said that he could not be more satisfied with the finished sign.

“It has the essential message”, he said.

The priest added that it was in the right position to be seen by people travelling through the town on their way to Knock.

“It's in good taste and should appeal to everybody”, he said.