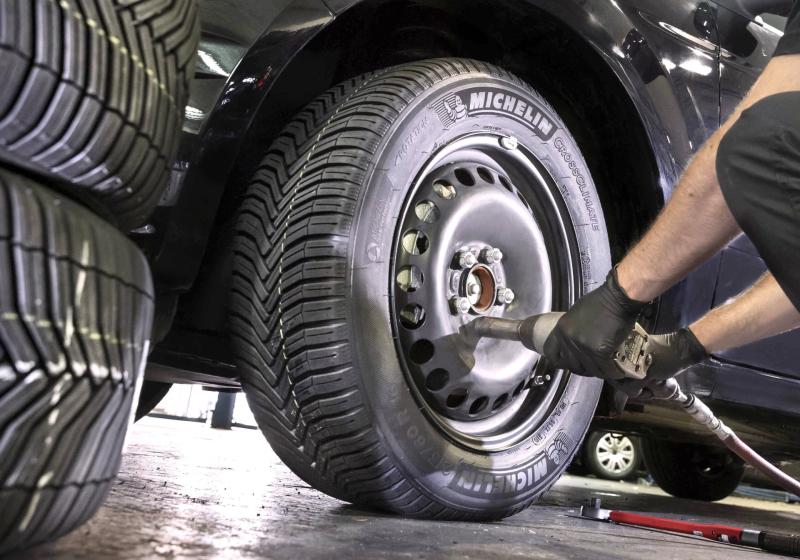 Fitting a Michelin CrossClimate tyre - the first Summer tyre to be independently certified for Winter use.

With freezing temperatures, snow and fog being experienced over the past week, Longford motorists are advised to prepare their car for the winter conditions that lie ahead.

Against the backdrop of survey results conducted by tyre manufacturer Michelin showing that sixty per cent of motorists drive with tyres that are underinflated, it is noted that, with normal tyres, low temperatures can harden the tread, reducing grip on slippery surfaces.

In winter, when temperatures can drop below 7˚C, the advice is that motorists would fit tyres designed specifically for winter conditions with compounds that remain flexible to improve grip and braking.

In this respect, the launch recently of their Michelin CrossClimate has put the French tyre maker ahead of the curve.

Made to perform equally well on sun-baked roads in Summer and on snow-covered roads in Winter, the new CrossClimate tyre is billed as the first Summer tyre to be independently certified for Winter use.

Available in 30 different sizes for 14 to 18-inch wheels, the CrossClimate tyre is the fruit of three technologies - an innovative compound that grips the road in all conditions; an energy-efficient, under-tread layer with low heat build-up properties; and a unique ‘V’- pattern tread with varying ‘vee’ angles and self-locking, variable-width sipes that act like claws in snow to enhance traction.

A study conducted by Michelin during the course of its development revealed that 65 percent of European motorists use summer tyres all year round. In Germany - where regulations require winter tyres - the figure was 20 percent while in France, where no regulations apply, the figure was 76 percent.

Out of every 10 European motorists, four considered it a constraint to change tyres in summer and winter, while three percent of drivers in Germany and seven percent in France use winter tyres all year round.