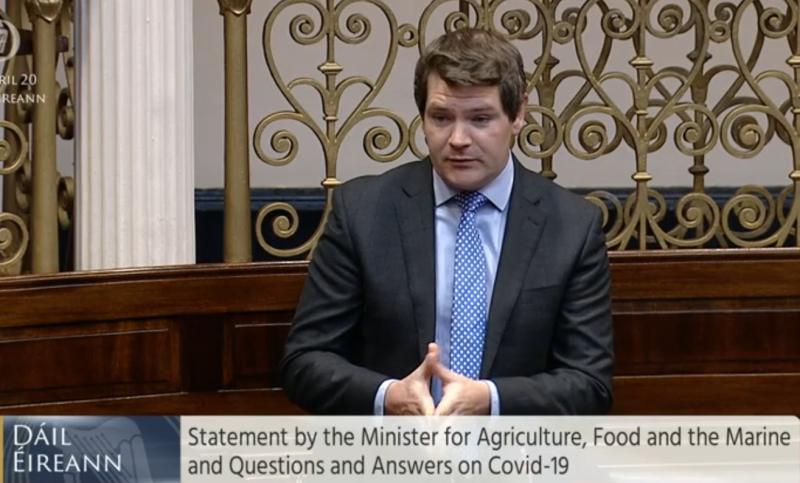 Longford Westmeath TD Peter Burke, this week raised a number of farming issues in the Dáil that had been highlighted to him in recent weeks by concerned farmers.

Fine Gael Deputy Burke, whose family still farm at Clonmore, said the Department of Agriculture need to communicate more with farmers at this time and provide increased financial and technical support.

“I have been contacted by a number of farmers who need essential work carried out on their farms to ensure they can implement appropriate animal welfare measures in the winter months. Many are due to have silage pits constructed, as well as the building of sheds which need to be in place before the winter arrives.

"With marts closed, farm holdings now have additional stock thus these buildings are essential. There have been issues with sourcing mechanical works for machinery as well as the securing of necessary veterinary supplies.

"Local authorities have been directed to pause all active planning permissions, which is unnecessary for certain agricultural planning as many consist of routine builds which do not have a material effect on neighbours. Similarly, farmers involved in TAMS need planning permission before they can apply or draw down funding. Farmers need clear, concise advice in relation to essential travel and access to farm supplies and hardware stores.

“The issue of working capital is at the heart of every business, farm enterprises included.  While the overall pot cannot change, the government need to look at measures to allow for early allocation and draw down of European funds.  Beef and sheep farmers continue to struggle, with volatility being experienced in nearly every agribusiness market at present."

Minister Michael Creed responded to these questions by announcing that his department will not need planning permission confirmed before farmers apply to TAMS, although before the complete application is processed planning will have to be in place.

He added that the government are working on a legislative fix to allow further financial support packages to be given to farmers who he acknowledged continue to be under significant financial pressure. He assured the TD that further advice has been given to local agricultural offices nd published on his department’s website.

The Dáil sat again last Thursday with only limited numbers (45) of TDs allowed to attend, and only two members of each party allowed in the chamber at any given time.

Burke, who is acting as the current Government Chief Whip, said that while social distancing is difficult to achieve in parliamentary settings, it can be done with the appropriate planning and co-operation.

When the Dáil meets to elect a Taoiseach in the coming weeks, it has been confirmed that the National Convention Centre in the IFSC is being rented out to allow all TDs to be present for the vote.