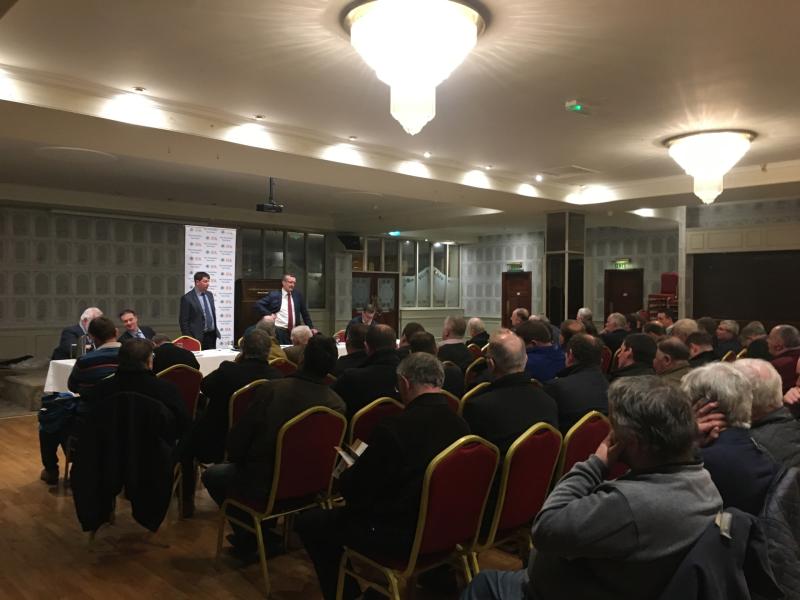 The meeting was held in the Longford Arms Hotel

Recently elected IFA President Tim Cullinan was present on the night to discuss some of the issues facing Irish agriculture and how the organisation intends to tackle them.

The Longford IFA AGM was held in the Longford Arms Hotel, Wednesday February 19, with a packed room on hand to meet and hear from the newly elected President of the IFA, Tim Cullinan.

Upon entry farmers had the chance to avail of some free literature such as a Farm schemes and taxation guide and the IFA’s recent submission to all Dáíl candidates. The evening kicked off with an opening address from current Longford IFA chair Gavin White, before John O’Hanlon (IFA Regional Development Officer) urged members to continue their support the organisation.

He said: “Now more than ever we need a very strong IFA.

“IFA is the only show in town for taking on the big issues.

“We need to dig in and support the executive and organisation.”

The election of county officers was then held, with Mervyn Waters of Killashee chosen as treasurer, Damien O’Reilly (Ballinalee) chosen as secretary, Paul Mollaghan (Ardagh) as assistant secretary and Padraic O’Farrell as vice chair.

Next up was presentations to members of Longford IFA, honouring their commitment to the cause down through the years. The JJ Farrell cup went to Padraic Gerety to recognise the work he has done through the years. Lifetime achievement awards were given to Martin Hannon and Bobby Farrell, while John Quinn was awarded an honorary life membership.

Then it was time for the address from Tipperary farmer and recently elected IFA President Tim Cullinan, where he touched upon a number of key issues facing the sector.

He said: “A cut of 10% would be very serious for Irish farming.”

Mr Cullinan says he met with An Taoiseach and and told him there was ‘no way the IFA is going to allow a cut of 10%”.

Another issue he tackled was flooding on farms along the river Shannon, after he met with local farmers Aidan Cousins, Noel Scally, Kevin Egan and Gerry Bourke and heard of the issues they have faced for a ‘lifetime', which he vowed to highlight.

The next two topics were beef pricing issues and climate change. Although Mr Cullinan admitted prices were ‘not an easy fix’, he feels recent meetings with key players in the meat industry in Ireland can provide some sort of optimism. After meeting with ABP, Mr Cullinan said they admitted that their stores are ‘all but empty'.

“It’s coming back to supply and demand.” he said.

“It’s looking good. They (factories) have less cattle than they need.

“Base prices picking up.”

In terms of climate change, the IFA president reissued calls for Teagasc to go back and look at the science behind methane emissions and climate change, after recent research has shown that methane produced on farms doesn't have an effect on climate change and has a 'lifecycle of 10-12 years’.

He then addressed concerns on sucklers, by suggesting suckler cows be looked at through an environmental point of view and farms viewed as carbon sinks, especially in disadvantaged areas. He also noted that the IFA are calling for a €300 suckler cow support, with €30 for ewes, in line with this.

The IFA president then listed out some changes he intends to introduce within the organisation. This includes: Getting chairs of committees working directly with the board, Going back to having regional meetings, eight per year, two per region, and getting county executives to host more events such as the farm safety event held on Longford chair Gavin White’s farm back in 2019.

In a final address to Longford farmers before a Q&A, Mr Cullinan urged everyone present to exercise caution when working on the farm in the year ahead.

He said: “One death is any year is one death too many.

“Try and farm safely for the year ahead.”

For a full exclusive interview with IFA President Tim Cullinan, pick up next week's copy of the Longford Leader.

Also read: 'She loved to help others out and this is a way to continue her legacy'