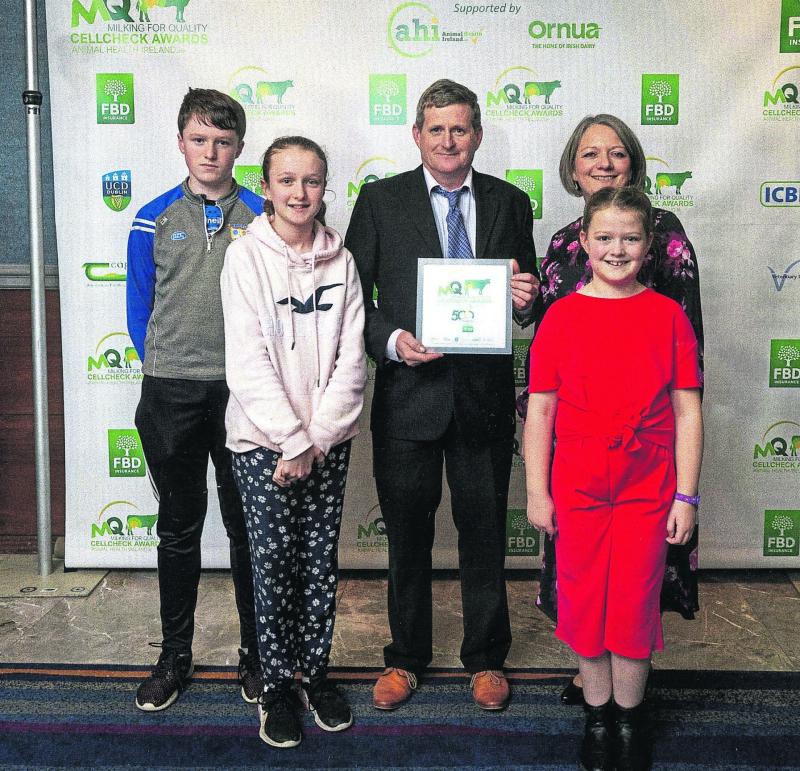 Pictured is David at the awards ceremony with his wife, Maria, and children Enda, Dearbhla and Aisling.

There was some success for Longford farmer David Masterson, Rincoola, Granard, at the recent FBD Cellcheck milking for quality awards.

The CellCheck Milking For Quality Awards ceremony was held in the Lyrath Hotel, Kilkenny on Wednesday, November 20. The Award is given to the 500 milk suppliers nationally with the lowest weighted annual average somatic cell count (SCC) for the previous year’s supply. It is an initiative to recognise and reward the excellence of Irish farmers who are currently achieving high standards of udder health on their farm.

Since the inception of the awards, the maximum SCC of award recipients has fallen each year from 103,000 cells/mL in 2014 to 76,500 cells/mL in 2018. All 15 Co-ops that submitted data to DAFM had representatives in the ‘Best 500’ category. The
CellCheck Milking For Quality Awards ceremony was sponsored by FBD Insurance and supported by Ornua and Animal Health Ireland.

In addition to the individual Awards being presented, two discussion group categories were also awarded– Most Improved Group and Best SCC Group. The winners in both categories were announced at the Awards ceremony. The Western Duhallow Discussion Group from Cork won the Most Improved Group while the Bunratty Discussion Group from Clare took the Best SCC Group Award.

The judges – George Ramsbottom (Teagasc), Kevin Downing (ICBF) and Finola McCoy (AHI) used the information submitted on the application form and information accessed from ICBF and Teagasc systems to identify the winners. In addition, a special presentation was made during the Awards ceremony to the best performing supplier from each of the participating milk processors.

Finola McCoy, CellCheck Programme Manager said; “The CellCheck Milking for Quality awards are a wonderful opportunity to acknowledge and celebrate the excellence of so many Irish dairy herds. Even during all the extreme weather events of 2018, these farmers managed to keep the udder health of their herds to the usual high standard-which goes to show, with good routines and attention to detail, it can be done!”

Speaking following the Awards, Fiona Muldoon, CEO of FBD said; “FBD Insurance is delighted to continue our long-standing relationship with the Animal Health Ireland CellCheck Awards. Since FBD first started supporting these awards, it has been wonderful to see this initiative go from strength to strength.

"Animal Health Ireland are recognised for their immense contribution to Ireland’s agricultural sector and to rural life generally. At FBD Insurance, we know that awards such as this help to reward farmers for following the right path on their farms
and I wish all of the participants the very best for this coming year.”