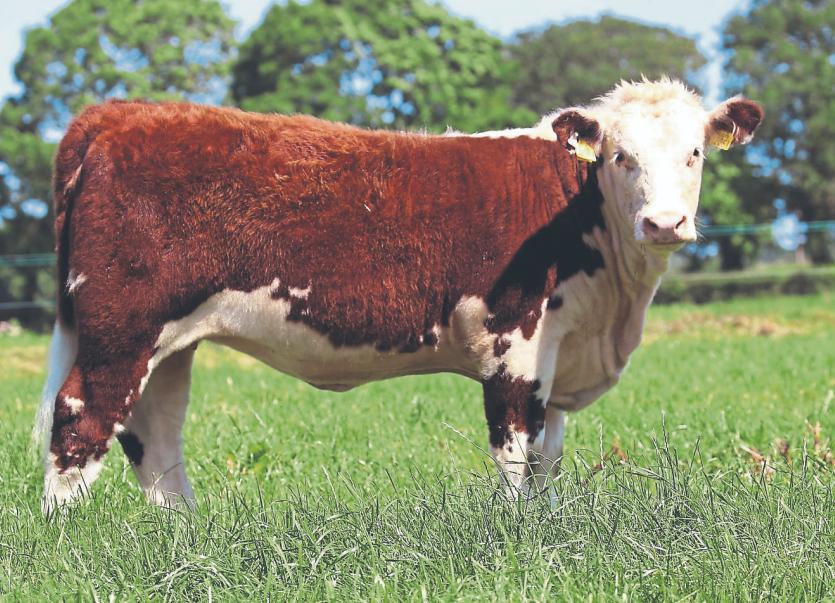 Lot 30: Trillick Charm, which was sold for a price of €3000 Picture: Elite Genetics Production Sale

All of the heifers entered into the sale came from three pioneer Hereford herds including: Balleen Herefords, Corlismore Herefords and Longford’s own Trillick Hereford.

Longford farmer JJ Farrell, who is well known around the show circuit, and the man behind Trillick Hereford told the Leader the sale ‘went great’.

He explained to the Leader: “The sale went great and the ring was full of people.”

JJ confirmed that all heifers were sold during the sale. Meanwhile, two of his own prized heifers had a short journey to make to their new home, as they were purchased by a fellow Longford farmer.

“It is great to see two fantastic heifers staying in Longford,” he continued.

The youngest heifer offered at the sale was Lot 30: Trillick Charm, aged at 10 months. Sired by Glaslough Rooney and born in October 2018, Charm was the first prize winner at the 2019 Longford agricultural show. Her DAM is a full sister to Trillick Dutchess and she was eventually sold for a price of €3,000 to a farmer from Northern Ireland.

One of the highest performing heifers at the sale came from Balleen Hereford, achieving a price of €5,800.

Also read: All sides in beef crisis dispute must come to the table to protect Longford jobs