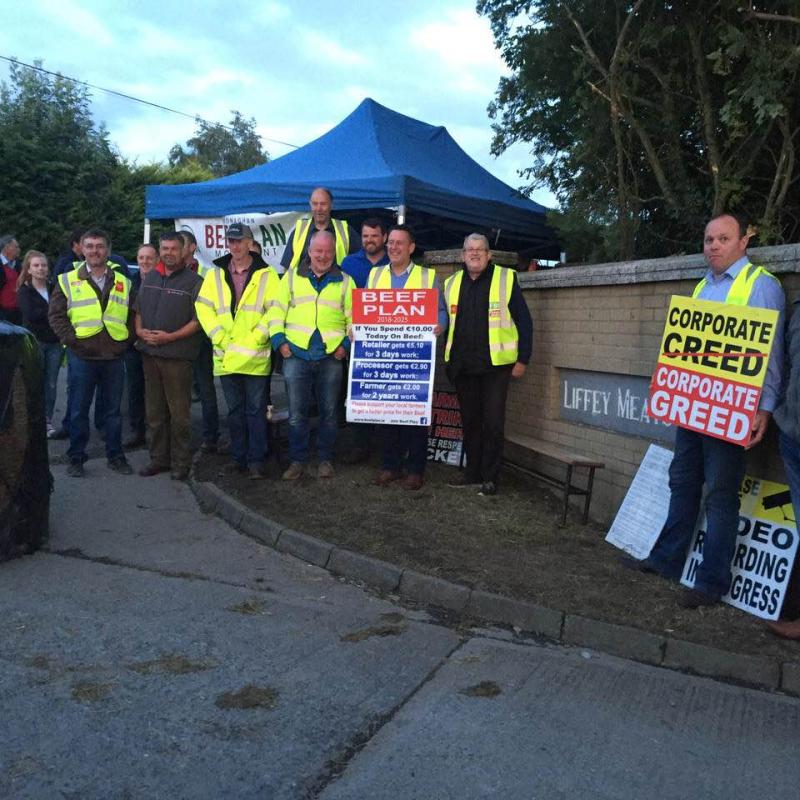 Cllr Paraic Brady, pictured on the picket line in Ballyjamesduff

Cllr Paraic Brady has issued a call for the immediate commencement of negotiations between members of the Beef Plan movement, farmers and representatives of Meat Industry Ireland.

The calls have been made by the Longford politician in light of recent picketing at meat factories and processors throughout the country, by farmers and members of regional Beef Plan movement groups, in the hope for improved prices for the beef they produce.

Cllr Brady confirmed to the Leader that he joined the pickets outside of Liffey Meats in Ballyjamesduff on Wednesday, August 7, before joining farmers on the front line in Athleague again this morning, Friday August 9.

Cllr Brady told the Leader it is no longer solely members of the BPM at the pickets, with individual farmers now showing up in strong numbers. He also questioned the recent legal threats made by Meat Industry Ireland.

“The Beef Plan Movement themselves are only one part of this.” Brady said.

“Farmers have now said they are willing to stand on their own backs.”

“Are they going to take on individual farmers?”

Cllr Brady, who farms himself and is a long-time member of the IFA, has expressed his deep disappointment at the lack of support for the protests by other farming organisations.

“I am disappointed that the IFA and other organisations haven’t come out and supported farmers.

“I won’t be paying my IFA membership next year, I can guarantee you that.” Brady fumed.

“They have not been seen to come out and show any support,”

Brady says the critical time for farmers, members of the BPM and those involved in the agricultural industry and protests, is this weekend with talks to commence at some stage.

“The critical time is from now until Monday at 8am. If they don’t get any stock in, the factories won’t be open on Monday.” he said.

Cllr Brady says he and other farmers on the picket lines feel sorry for the workers affected, but says they have no other alternative and they are willing to stick it out as long as possible.

He said: “I do feel sorry for the workers.

"I am a father of four. I would rather spend time with them than on the pickets, but we have no other choice.

“We need to sit down and have talks, sooner rather than later.”

Concluding Paraic Brady urged everyone within the agricultural community to show their support to the cause.

He said: “Now is the time to take a stand and stick together as a united front.”