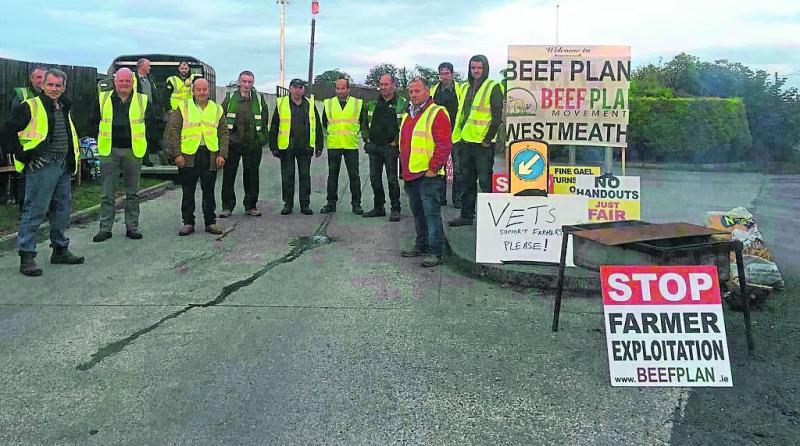 We will not be 'Moooved' - Farmers from Longford, Westmeath and surrounding areas join forces outside a meat factory in Kilbeggan, Co Westmeath, as part of the nationwide Beef Plan Movement protest

Farmers and members of the Beef Plan Movement (BPM) have today, August 8, continued their nationwide protests outside of meat plants and processing facilities throughout the country.

Longford farmers have joined in the protests, covering facilities in Kilbeggan, Athleague and Ballyjamesduff. Meanwhile, Longford politicians also added their support to the cause, with Deputy Peter Burke, Cllr Paul Ross and Cllr Tom Farrell, joining the picket lines in Kilbeggan yesterday, August 7.

Burke, who runs a small suckler farm with his father Peter Snr in Clonmore, Mullingar, pledged his support to beef farmers at this critical time.

He said: “I understand the issues facing beef farmers at present and the huge pressure they are under.

“I listened to all farmers present and will be relaying their concerns directly back to the Taoiseach and the Minister for Agriculture”.

Cllr Micheàl Carrigy also visited the picket by the Beef Plan Movement at Kepak Kilbeggan yesterday, August 7, to show his solidarity with the farmers and their families in their campaign to reverse ongoing low prices.

Cllr Carrigy said: “Farmers deserve to earn a decent livelihood for all their hard work.”

Other Longford politicians to lend their name to the campaign were Cllr Gerry Hagan and Cllr Padraic Brady, who both visited the pickets at Ballyjamesduff last night, August 7, joined by none other than Drumlish native, Declan Nerney. Cllr Mark Casey also expressed his 'deep concern' as Minister Creed refusing to intervene.

Galway/Roscommon TD, Michael Fitzmaurice, who also joined in the protests during recent days, said all farmers must stand in unity to hold any chance of making a sustainable living as a farmer.

He said: "Having attended a number of protests this week, it is obvious that farmers need to stand together if they have any chance of ensuring that a sustainable livelihood can be garnered from farming.

"While some factories will revert to offering sweetheart deals in order to secure cattle, farmers must hold out. A stand needs to be made once for all. It is also worth noting that retailers have questions to answer as well, as they all also make significant profits from the sale of beef.

Concluding he said: "I wish the Beef Plan Movement and their supporters well in continuing these peaceful protests and commend farmers and vets alike who have refused to cross the picket lines this week."

MEP’s Matt Carthy and Luke Ming Flanagan were other political figures to weigh in on the situation and join the campaign for better beef prices. Luke ‘Ming’ attended the protest in Athleague on Tuesday, August 6, before apologising to farmers as an MEP.

Addressing protesters 'Ming' Flanagan said: “I am really sorry and I want to apologise for the profession I am in.

“You have been let down for decades and it has gotten worse and worse,”

During his address, MEP Flanagan also criticised some portions of the media for reporting on alleged ‘bad behaviour’ of farmers and Beef plan members during protests, questioning their intentions.

“All I can say is any of you I have met, you have been the most well behaved people I have met in my life.” he stated.

MEP Flanagan then called on people from all walks of life to stop buying ‘cheap meat’ and start supporting the farmers.

“They do not know they need ye.” he added.

“They don’t seem to realise the money you make in farming...ends up in their pocket.”

Contractors, agri merchants, vets, local businesses and agri suppliers have since added their support to the movement, urging others to follow suit for the good of everyone's future livelihoods.

Covering a reported sixteen establishments in total, BPM have refused Minister for Agriculture, Food and the Marine, Michael Creed’s latest request for a roundtable discussion between all the major stakeholders in the industry, a move slammed by both Meat Industry Ireland (MII).

A spokesperson for the Minister stated earlier today: “The Minister deeply regrets that efforts by his office to reach out to the Beef Plan Movement to enter a process of dialogue and to temporarily suspend their protests has been rejected.

“A round table discussion regarding the current market difficulties involving all stakeholders including Minister Creed, farm organisations, representatives of the beef processing sector, Meat Industry Ireland, the Department and its agencies has been offered to the Beef Plan movement.

“In light of the announcement of layoffs in the meat processing sector, the difficult income situation facing farmers with livestock for slaughter and on animal welfare grounds, the Minister is again calling on the Beef Plan Movement to reflect on its position and to take up the invitation to enter into talks.”

Meat Industry Ireland expressed their ‘extreme disappointment’ at the rejection of talks by BPM.

They said in a statement: “Meat Industry Ireland (MII) is extremely disappointed that an initiative brokered by the Minister for Agriculture, Food and the Marine to bring together the full resources of the State and all the beef sector stakeholders was rejected last night by Beef Plan, who refused to participate.

“Earlier in the evening, MII accepted the Minister’s invitation to attend the meeting despite the serious intimidation and outright illegality its members have faced over the past twelve days of the Beef Plan blockades of meat plants.”

MII then slammed what they described as ‘unlawful behaviour’ by some protesters, which they say has caused ‘irreparable damage’ to the industry, something refuted by members of the Beef plan movement.

A statement reads: “The continued intimidation of fellow farmer suppliers, company employees, government assigned veterinarians and other service providers including hauliers is unacceptable.

“Unfortunately, as a result of the Beef Plan campaign of illegal blockades, companies have been forced to lay off employees with more expected to be laid off in the coming days as operations grind to a halt. Other service providers are also unable to earn a living as sites are blockaded and unable to continue operations unimpeded.

“At this point Beef Plan has been responsible for the closure of some 14 plants while many other plants are now operating well below capacity due to intimidation and breaches of the rule of law. Beef Plan claims of conducting peaceful protests ring hollow in the face of these facts.

MII claim that protests are putting the success of exporters at risk and state that the continued protests are creating ‘serious health & safety risks’. They also warned that they are left with little alternative, but to seek a legal remedy to the situation.

“Beef Plan leadership must bear full responsibility for its actions and the resultant damage caused.

“Unfortunately, because of Beef Plan blockades, and in the aftermath of its refusal to enter talks brokered by the Minister, businesses have, as a last resort, been left with no choice other than to seek legal remedy in an effort to prevent Beef Plan from causing further damage to the Irish beef industry.” the MII statement concludes.

The BPM protests continue for the foreseeable future, with BPM urging all farmers, members of the movement or not, to come out and show their support. They also wished to thank everybody locally who have supported the cause thus far.