Over 250 gather for Beef plan meeting in Ballymahon mart 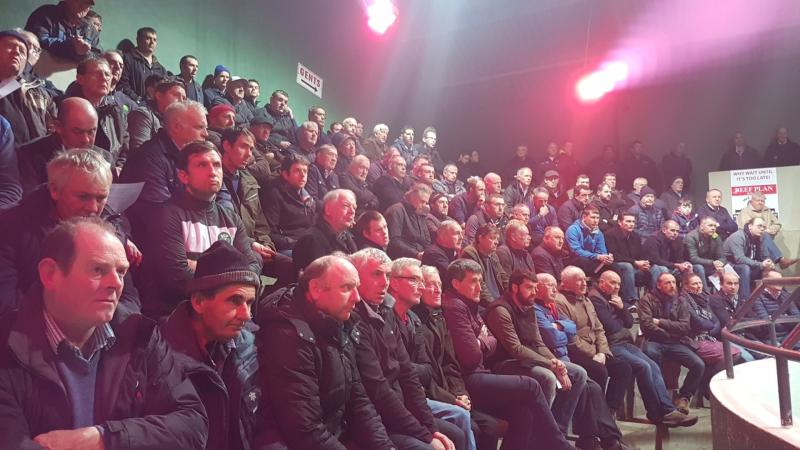 A crowd of 250 - 300 farmers from counties Westmeath and Longford gathered at Ballymahon Mart for the latest Beef Plan Movement meeting on Tuesday, February 12th.

The message at the recent Beef Plan Movement meeting in Ballymahon mart was clear, unless there is any engagement from processors soon, there beef industry will be no more. Farmers were warned by Committee member, Willie McCormack, that the current return is not sustainable for farmers.

“The margin for beef farmers is gone,” he warned.

The meeting, which was opened by Westmeath chairperson, David Whelehan, gave attendees an insight into the main reasons behind the formation of the movement, as well as details of some of the progress made thus far. This included details on the group’s establishment of county structures, purchasing groups and producer groups.

It was expressed at the meeting that farmers cannot continue to produce a high-quality product that meets all Quality Assurance regulations, whilst accepting a price which is below the cost of production. It was noted that farmers are under no contractual obligations to continue supplying cattle for processors and declining suckler farmers numbers was a focal point of discussions on the night.

One of the main revelations discussed at the meeting was the unreliability of factory carcass trim and grading machines. This is why the Beef Plan Movement is calling for farmer representation on the kill-line, carcass images to be provided, animals to be weighed live, an Appeals process to be introduced and a response from the Irish Business and Employers Confederation (IBEC).

Another major talking point from within the meeting was the non-payment of QPS (QA) bonus for many cattle. It was noted at the meeting that stipulations enforced by factories had little to no impact on beef quality of carbon footprint and the group say they are “questioning the validity of some stipulations in place”.

The formation of purchasing groups and producer groups were also detailed at the meeting, with the producer group formed to help ensure farmers get a maximum return from their produce. They hope to achieve this through six regional databases of factory fit cattle.

The fifth quarter was another topic which was touched upon at last week’s meeting, as attendees were informed of the true value of the fifth quarter to processors. The fifth quarter is described as the remaining pieces of an animal carcass which is not used in meat production, but in the formation of other products such as cosmetics.

Attending farmers learned that the fifth quarter is estimated to be worth up to €200 to processors. Willie McCormack, committee member of the Beef Plan, warned that although farmers are starting to become more aware of the fifth quarter, the true value of produce from offal remains unknown.

“It is starting to become something people are aware of,” he said.

Also in attendance at the meeting was Fianna Fáil General Election Candidate, Joe Flaherty, who called on Minister for Agriculture, Food and the Marine, Michael Creed TD, to outline what the Government intends to do to protect beef farmers and ensure their long term viability.

The Longford Cllr said the anger and frustration of farmers in the sector is all too evident.

“Farmers are under severe pressure and their stress levels are extremely high. They need the government to provide clarity,” concluded Cllr Flaherty.

Speakers at the event also noted the formation of the Beef Data and Genomics Programme (BDGP) subcommittee within the Beef Plan Movement. Members were advised to give their input on the BDGP.

The main take-home message from last Tuesday’s meeting was the importance of obtaining improved prices, whilst attending farmers were also urged to stand together and show strength in numbers.

“Strength in numbers is the way to go.”