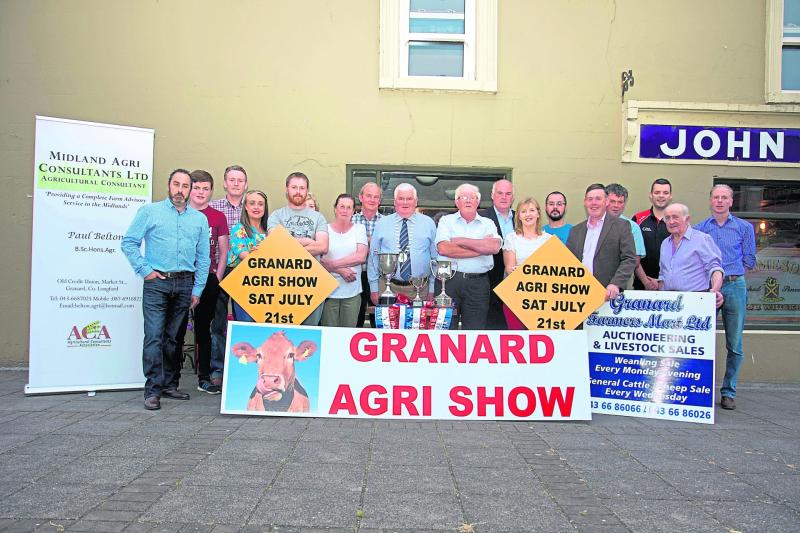 This year's show is packed with fun entertainment for all the family, plenty of crafts and gifts, not to mention food, local trade stands and, of course, agriculture galore.

“It’s a traditional event that’s run on an annual basis. It’s a very good agricultural show with livestock, horses and everything and this year it’s a two-day show. There’s show-jumping and different events on the second day.”

This year's show will include a wide range of activities for children and adults alike, with a novelty boxty-making event, a butter-making demonstration in conjunction with the local butter market, bouncing castles, children's entertainment and, to top it off, the Show will offically be launched by best-selling Killoe author of 'The Cow Book', John Connell.

Inside the clubhouse, there will be a wide variety of exhibitors.

“All is on show there and people have been preparing for the last few months to come to the Granard Show from the surrounding areas - and from further afield.”

One of the highlights of this year's show will be the dog show, which Hazel says always brings out a good crowd as it'll include family pets and show dogs alike.

“We have guess the weight of the bull. We have the Macra people who are going to put an exhibition on. We have Longford ICA who will have a stand and will be recruiting new members into their group,” said Hazel.

This year, the show will take place over two days, with show jumping on Sunday, July 22.

“This is the first year in a long number of years that we’re having the jumping,” Hazel explained.

“The return of the jumping is a huge thing for us this year. The last number of years, it’s just been the one day - the agricultural show.

“But this year, some new members joined our committee, so it was decided that we would try and see could we return the showjumping to Granard.”

And the show jumpers won't be the only ones on horses this year.

Also on the Sunday, we’ll have the Garda Mounted Unit coming down to us from Pheonix Park in Dublin,” said Hazel.

“Unfortunately, they can’t come down on Saturday like they did last year, so they’re coming down to us on Sunday.

“It’s a huge attraction for kids. They love going up and getting their picture taken with them.”

Every year, a lot of effort goes into getting local community groups involved and this year is no exception, with a wide range of local businesses and sponsors eager to do their bit for the success of the show.

“Without our sponsors, who are the most important in the whole event, this two-day event wouldn’t be able to go ahead. Also the exhibitors and spectators on the day - they make the day. Just everybody that forms part of the Granard Show. We’re grateful to them for all their efforts,” said Hazel.

These sentiments were echoed by fellow committee member, Gerry Tully, who is the Chairperson of the Granard Show.

“The local businesses far and wide in the whole county of Longford have really supported us and it’s down to them; without our local businesses, the show wouldn’t happen. That’s the way it is,” he said.

“Hopefully the weather will stay good for another week and that everybody will come and support our show,” he concluded.