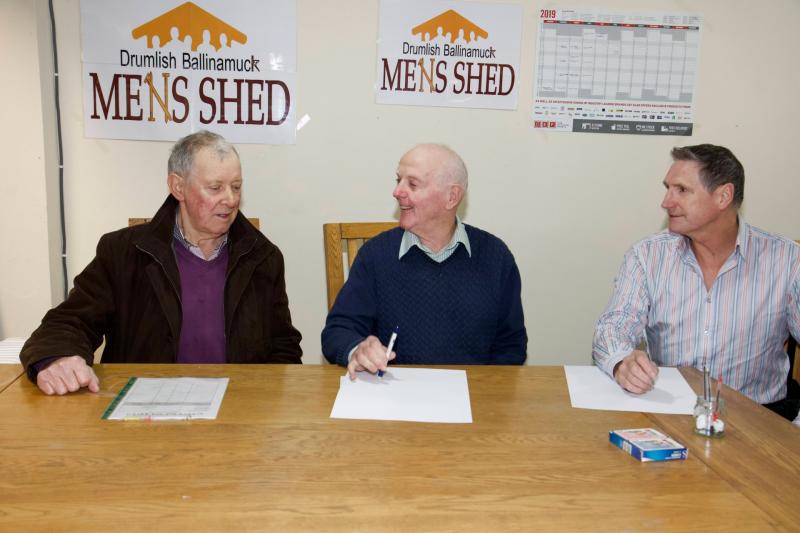 The Men's Shed in Drumlish/ Ballinamuck is a community-based initiative which invites men of all ages and backgrounds to come together in a friendly, all- inclusive environment.

The project to open the men’s shed in the area was started by co-ordinator Breda Murphy and the facility finally opened in late 2017.

Chairman Brian Massey told Roving Leader: “There was a need for a men’s shed in both parishes and driven by Breda Murphy, the premises were acquired.”

In fact, the men’s shed project would not have been possible, were it not for the support and generosity of the local community. Their base is located on the main street of Drumlish and is the former shop/pub of Charles and Margaret Kiernan, who kindly donated its use free of charge.

Chairman Brian Massey told us: “Many thanks to Charles and Margaret, who gave us the premises in the first place.”

When upgrading the facilities in the ‘shed’, the team were helped out by many of the local elected representatives, hardware providers and tradesmen in the area. The idea behind the foundation of the shed was to bring men within the locality together for some fun and a friendly ear.

The group not only have a focus on the health of all members, but also partake in a number of activities, such as clay pigeon shooting, throughout the course of the year. The men’s shed also has its very own pool table, workshop and darts board, while they plan to put a library in place very shortly.

Brian Massey: “We have now developed a workshop, so men can come in to manufacture and repair things.”

The men's shed is open to men of all ages in the vicinity and meetings usually take place on Thursday evenings. Most see it as a place to socialise, while to others it is an outlet to help cope with mental health and other issues.

Brian Massey again: “We normally meet on a Thursday but as we progress, we plan to have the premises available in addition to that.

“Personally, it has allowed me to meet an awful lot more people and I think that is the basis of it. It allows men to get together to chat about everything and anything.”