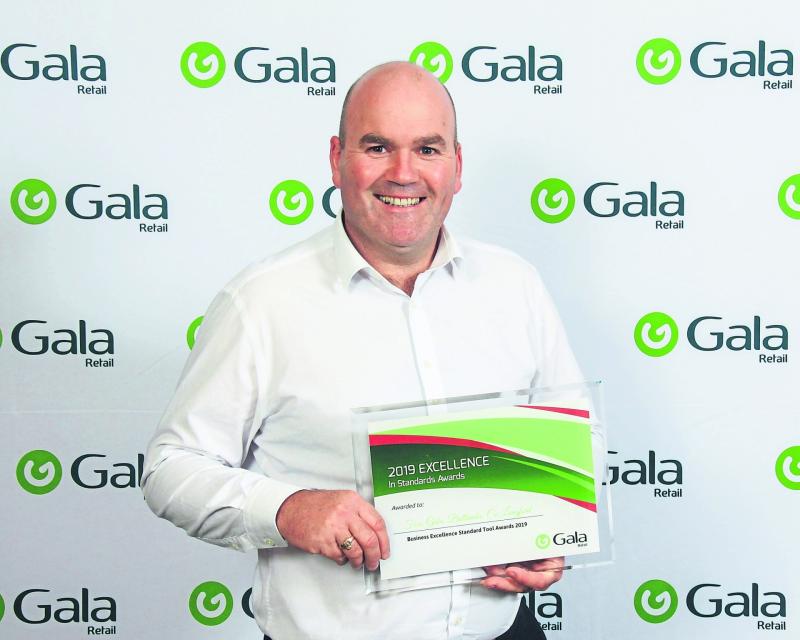 Two Gala convenience stores from throughout County Longford have been awarded the Gala B.E.S.T Award for excellence in retail at the 2019 Gala B.E.S.T Awards, which took place last week at The K Club in Co. Kildare.

The awards followed the annual retailer trade show which took place at Punchestown.

Presented to stores that are deemed ‘outstanding’ following a comprehensive and independent assessment process under the Gala ‘Business Excellence Standards Tool’ (B.E.S.T) programme, the B.E.S.T. Awards recognise excellence in retailing throughout the Gala Group.

The two local stores that received Gala B.E.S.T Awards at the event were Corrigan’s Gala, Legga and Foxs’ Gala, Ballinalee, while Hanlons’ Gala, Longford were recognised with the Alcohol Award.

Speaking at the conference, Gala CEO, Gary Desmond, said, “The Gala B.E.S.T awards recognise excellence in retailing across the entire Gala Group of stores and we offer our congratulations to all of the Longford stores who have been recognised as outstanding in the field of convenience retailing.

“These stores excel in providing innovative and customer-centric retailing solutions to the communities in which they operate. We wish all our award winners from Longford another successful year and look forward to celebrating their future successes.’’

Gala Retail’s annual event brings together all the retailers in the Gala Group for an action-packed few days that includes attendance at the supplier trade fair, group activities and the Gala B.E.S.T awards night.

Prior to the Gala B.E.S.T Awards, Gary Desmond, CEO of Gala Retail, thanked Gala retailers for their ongoing commitment and excellence in retailing. He recapped on this year’s events and marketing activities and unveiled plans for the future.

The awards ceremony takes place in the Marker Hotel in November.