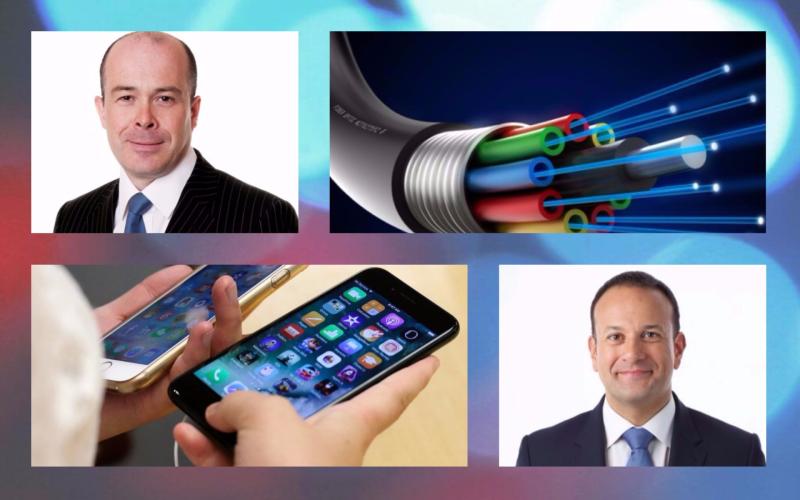 In accepting Denis Naughten's resignation as Minister for Communications, Climate Action and Environment, An Taoiseach Leo Varadkar said he believed Deputy Naughten left himself open to allegations of a conflict of interest and an inappropriate relationship with David Mc McCourt, thus potentially jeopardising the National Broadband Plan in its entirety.

Mr Varadkar's stated in the Dáil;

"The national broadband plan is the government’s plan to provide high speed broadband to every home, farm and business in the country. It will be the biggest investment in rural Ireland ever and I believe it will be as significant as rural electrification was decades ago, allowing people in all parts of Ireland access public services online and trade in the digital economy.

Since this government of Fine Gael and independents came to Office the number of homes, farms and businesses connected to broadband has increased from 52% to over 75%. My aim is to get to 100%. Therefore, the overriding concern for me as Taoiseach and for this government is to provide this infrastructure to the 540,000 homes, housing over one million people who have been waiting for it for far too long.  This is my only interest when it comes to this matter.

In the interest of full disclosure, I want to put on the record of the Dail that I met Mr David McCourt on one occasion last March in the United States at a public event with the media present when I presented him with St Patrick’s Day Science Medal.  We did not discuss the National Broadband Programme.

Yesterday evening, I sought a meeting with former Minister Naughten where I asked him to outline to me his interactions with Mr David McCourt.

I was satisfied with the explanations he gave. He subsequently contacted me shortly before midnight last night to inform me that he had just remembered that he had a private dinner in Mr McCourt’s home in 2017. This was organised by Minister of State Breen who was also present. Deputy Naughten suggested that in order to protect the National Broadband Plan project that he be reshuffled to another ministry or that responsibility for broadband be assigned to another Minister. I said that I would reflect on it overnight and meet him in the morning.

Also read: Broadband not spot! Longford has slowest average broadband speed in Ireland and Legan is the slowest area

I met with Deputy Naughten again this morning and during the meeting he informed me that he had at least 3 other private dinners with Mr McCourt. There were no officials present and there are no minutes. He had not informed me of these additional meetings either when we met yesterday or when we spoke last night.

I have no doubt that his intentions were honourable at all points. But I do believe he left himself open to allegations of a conflict of interest and an inappropriate relationship with Mc McCourt which could have in turn brought the process into question, thus potentially jeopardising the project in its entirety. Ultimately as Minister he had a decision making role.  It would have been his responsibility to bring to Cabinet the memo to gain the approval of government for the awarding of any contract.

As a result of this, I asked him to reflect on his position. He asked that he be allowed to explain his position to the Dail. I have since received his resignation in writing and I have accepted it. I would like to inform the House that I am assigning Minister Richard Bruton on a temporary basis to the Department of Communications, Climate Action and Environment.

I have also sought a report from Mr Peter Smyth. He is the independent process auditor for the National Broadband Programme in order to assess whether or not the process has been compromised.

I deeply regret that these events have happened. But I believe in resigning, Denis has acted in the public interest. I am determined to see the National Broadband Plan through to completion.

Sometimes there are days when I have to make decisions that may cause deep personal distress to others but are necessary for the good of the country. Today is one of those days. I have known Denis for over twenty years and we were in Young Fine Gael together and I have had nothing but respect for him as a person and a politician.  I know today is a difficult day for Denis and those close to him. However, my job as Taoiseach must always be to put the public interest first."

Also read: Up to 60 jobs to be created at former Cameron site in Longford