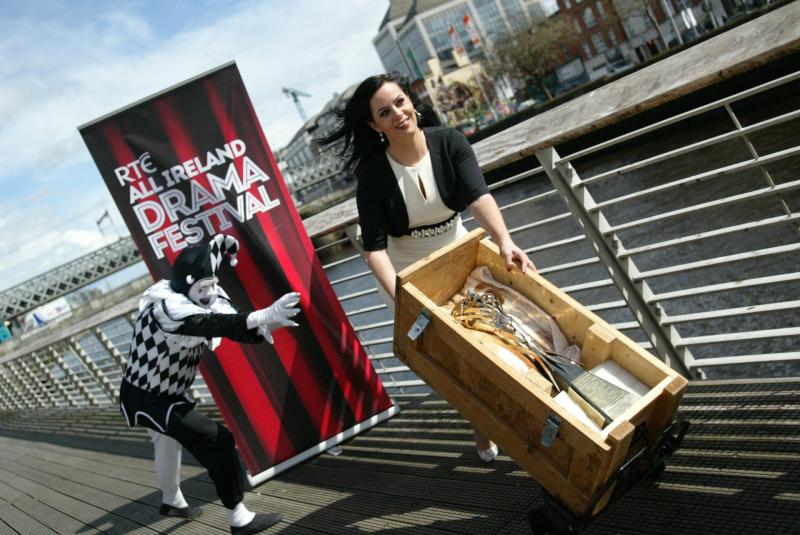 RTÉ presenter, Audrey McGrath who will MC the RTÉ All Ireland Drama Festival Gala Awards Dinner in the Radisson Hotel, Athlone on Saturday, May 12. Photo by Eric Molloy

It’s the 66th RTÉ All Ireland Drama Festival, the premier theatrical event of its kind in Ireland, showcasing the very best of Irish amateur theatre and attracting thousands of visitors, every year, to Athlone. Dee Forbes was joined by Joe McCarrick, Festival Director, Aidan Reidy, Chair ADCI, and Neil Murray, Artistic Director at the Abbey Theatre.

Dee Forbes said at the launch: “The partnership between RTÉ and the RTÉ All Ireland Drama Festival gives tangible expression to RTÉ’s commitment to communities, and to what keeps our communities alive, be it crafts, be it sports, or, as in this case, amateur drama. I almost hesitate to use the phrase “amateur”, such is the quality of what we will see here in the coming days.

RTÉ supports over 130 arts and community events each year. With the RTÉ All Ireland Drama Festival we realise our commitment to foster creativity and acting talent through drama, and to bring the excitement and tension of this unique festival to audiences all over Ireland, through the partnership with RTÉ lyric fm, through RTÉ.ie and our social channels, and through RTÉ Radio 1.

All paths lead to Athlone during May. This year's festival is testimony to the power of community arts.

We wish all participants the very best of luck in the competition and look forward to an exceptional week of drama.”

During the week of the festival, RTÉ will broadcast daily reports from the RTÉ All Ireland Drama Festival on RTÉ lyric fm, while a special edition on Arena on RTÉ Radio 1 will come live from Athlone on opening night.

The nine-day festival takes place in the Dean Crowe Theatre, Athlone from Thursday, May 3 to Friday, May 11.  Nine drama groups from around the country will perform and compete in the festival. You can find out more at http://www.dramafestival. ie/