One-woman circus 'In A Hoop' for Longford's Backstage Theatre show 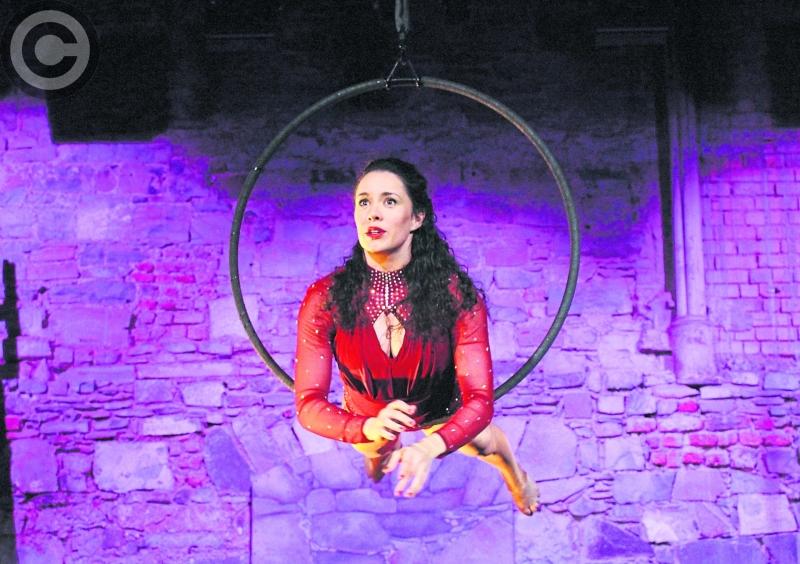 Kate Finegan, who his an accomplished aerial artist and circus performer, plays Kitty in Darren Yorke's daring new show 'In A Hoop' which you can see at Backstage Theatre on Friday, November 17 at 8pm

You’ve heard of mid-life crisis? Well, Kitty is in the middle of a mid-twenties crisis.

But this millennial meltdown has nothing to do with the price of avocados.
She feels like she has no purpose. She sees her friends living their best lives but she thinks she’s lagging behind.

Kitty is well and truly 'In a Hoop’ but aren’t we all?

Mixing verbatim dialogue with the aerial skills of Kate Finegan, ‘In a Hoop’ is a one-woman circus which sees our protagonist Kitty flying through the air with the greatest of ease while at the same time struggling to keep her feet on the ground.

This one-of-a-kind spectacular show takes you on a tour through the ailing mind of today’s Generation Y.

Caught between childhood and being a full blown grown up, Kitty needs you to help her sort her life out.

This daring new show is the brainchild of Longford native Darren Yorke.
Having completed his degree in Drama and Theatre Studies at Trinity College Dublin, Darren travelled to Canada where he performed with the renowned improv theatre troupe, The Vancouver Theatresports League.
On his return, he met with Kate Finegan who had since become an accomplished aerial artist and circus performer.

They decided to create a show together using Kate’s skills and Darren’s writing.

“This production has now been in development for more than a year, and we are so proud of where it is now. Kate Finegan (who inspired and plays Kitty) is an absolute power-house as a performer, and as friend.”

While brainstorming ideas, Darren recorded their conversations on his phone.

These recordings would form the basis for the script.

All of the lines in the show are taken verbatim from conversations that Darren had with Kate; about her work and more importantly her life.
This show combines the everyday thoughts of the show's star, Kate Finegan with her incredible aerial hoop skills.

Anyone who loves a spectacle is guaranteed to be wowed by Kate and her hoop.

She swoops and she soars. She dizzies and dazzles. She’s one night only and she’s worth the ticket!

“There’s so much heart in this show. It’s jam-packed with laughs, and the spectacle of aerial hoop as a storytelling tool has to be seen to be believed. We are delighted to be debuting it with the incredible Backstage Theatre crew, and to be showcasing work where it all began for me,” Darren concluded.

'In A Hoop' will take to the Backstage Theatre on Friday, November 17 at 8pm.