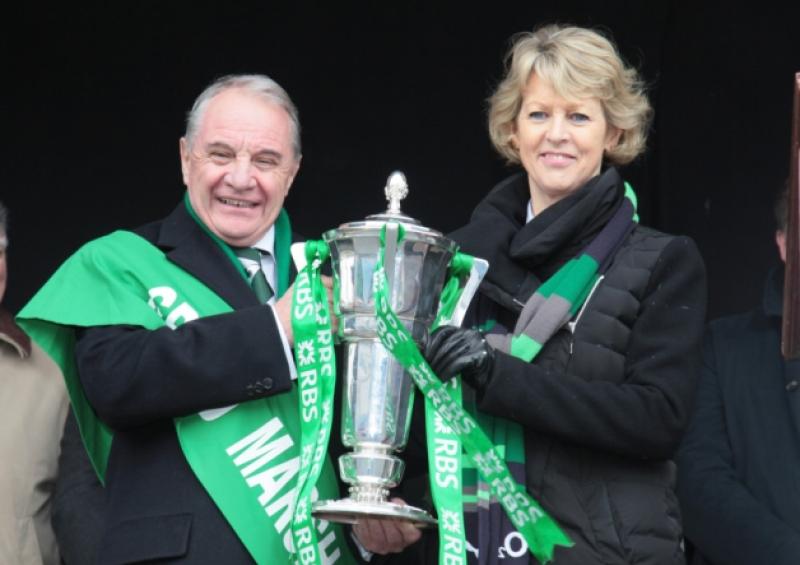 And Mr Fitzgerald made the occasion all the more special by bringing with him, the coveted RBS Six Nations Trophy secured by the Irish squad following their dramatic victory over France in Paris on Saturday.

It was Brian O’Driscoll’s final time to line out with Ireland and what a fitting way it was for him to depart the international rugby stage.

“I want to pay a special tribute to our grand marshal today, Longford’s own pat Fitzgerald,” said Mr McGill.

“This will be a momentous weekend for him as the president of the IRFU and he is back amongst his own for one of the highest honours that this town can bestow on a native son.”

He went on to say that Mr Fitzgerald could now count himself in “good company” as last year’s Grand Marshal, Larry Nolan, recently celebrated his 100th birthday and continues to be one of the finest looking men in Longford!

“On a serious note, Pat has never forgotten his native Longford and at all times, done whatever he could to promote and benefit the town and country,” added Mr McGill.

“He is a true champion for this great county of ours.”

An Taoiseach Enda Kenny congratulated the side and commended their outstanding courage and skill in winning this year’s RBS 6 Nations Championship.

“It was a hard won victory in Paris and a testament to the teams’s bravery and resilience. On behalf of the Irish people I would like to extend a special tribute to Brian O’Driscoll on this his last game in an Irish jersey. Brian has finished his career on his own terms which is appropriate because that is how he played the game. He was a warrior and a genius and gave Irish rugby fans great joy through years of commitment and pride in playing for his country.”

Spirit of the Parade - Brian Crosby