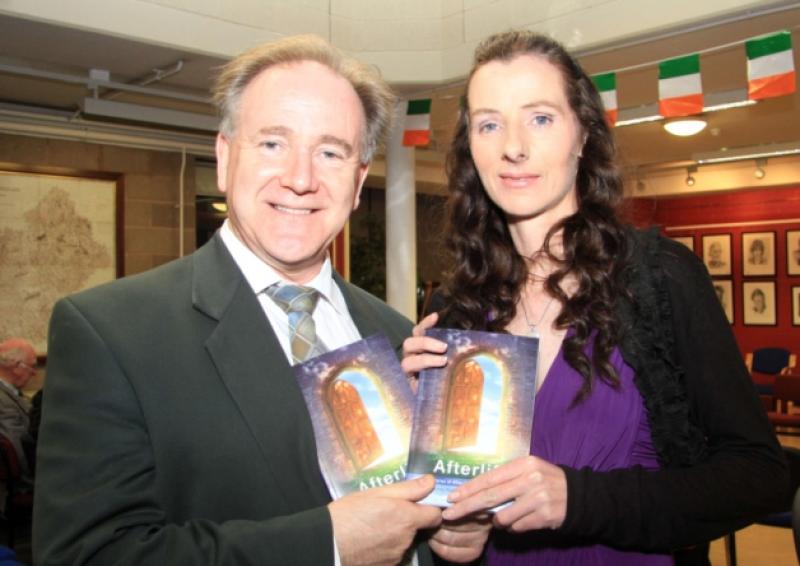 Local author and journalist, Audrey Healy launched her second publication on death and the paranormal at Longford library last week.

Local author and journalist, Audrey Healy launched her second publication on death and the paranormal at Longford library last week.

‘Afterlife’ is a follow on from ‘Contacted’ which Ms Healy wrote a number of years ago with Don Mullan, and was launched last week by Irish Times Religious Affairs Correspondent, Patsy McGarry. The book features over 60 stories from people all over the world who have had experiences with loved ones following death. Peter Briody from Longford also features in the publication. Mr Briody discusses in detail his experience as he walked up Longford’s Battery Road in the summer of 1967.

“Back in the summer of 1967 I had left my girlfriend home and was walking up the Battery Road home,” he said. “It was about 11.30pm on a Tuesday night. I suddenly froze; it felt like I had been dipped in a block of ice. I felt every hair on my head being pulled up. I am not easily scared, I nonetheless did not have the courage to take my hands out of my pockets. In a matter of seconds the feeling disappeared and I continued home. It bothered me so much that I told a friend. The following Friday night, after we had both left our girlfriends home and were passing the same spot, I asked my mate to wait on the path and in order to face this fear I climbed the wall of the graveyard. I proceeded to stumble down the graveyard, tripping over briars, headstones, sunken graves, etc - and upon returning to the footpath we continued home. The experience has never bothered me since but has remained vividly in my memory.”

Altogether Ms Healy has published seven books, including St Thérèse in Ireland, Dubliners: What’s the Story?, Contacted, The Singer and the Song, Mick Flavin – Celebrating 20 Years and The Rose and the Thorn (also with Don Mullan). This latested publication, she says, developed as a direct result of the response she received to ‘Contacted’ back in 2005.

“This book is about people who have lost loved ones and still feel that they are close,” the author explained, adding that it was more a book about “hope” rather than the paranormal. “Death is a universal theme, because everyone has lost someone, and people are always talking about the subject matter. I have received a great response to both books - this is the second book I have done on the subject - I feel that it is more about hope and the belief that our loved ones never leave, even in death. This is a very comforting sceanrio for people trying to come to terms with loss. I find that people are always talkikg about death and loss in some shape or form.” Ms Healy is currently working on another project, the fruits of which will be published next year.