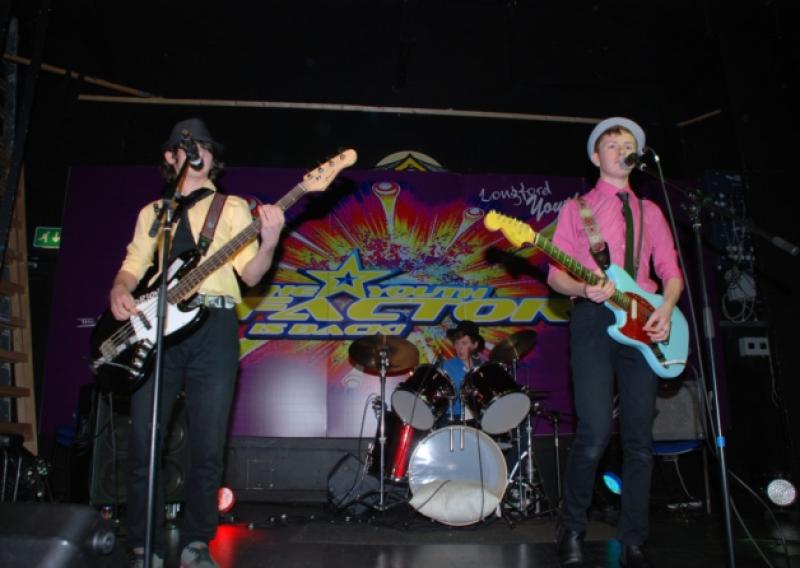 All eyes were on the prize on Saturday night last, as seven contestants battled it out to get through to the Longford Youth Factor Final.

All eyes were on the prize on Saturday night last, as seven contestants battled it out to get through to the Longford Youth Factor Final.

Each act performed twice on the night with one song chosen from the disco/funk genre and one being the performers’ own choice.

Drifting Flames opened the show with a disco remix of Avicii’s ‘Wake me up’. Vocalist Chloe sounded and looked the part, donning a dazzling up style by hair stylist Emer O’Brien. Drifting Flames’ second song of the night was ‘Living on a Prayer’ by Bon Jovi. Guitarists Dwight and Kamil nailed the riff and the band had the Temperance Hall rocking.

Crowd-pleaser Adam Fenelon performed his rendition of catchy Christmas number one, ‘Uptown Funk’ by Mark Ronson and Bruno Mars, and later in the show slowed things down with an acoustic cover of ‘She looks so perfect’ by 5 Seconds of Summer. Adam received outstanding comments from the judges with Evelyn Kelly commenting that “You have a well-established fan base and are going to go very far. I can tell I’ll be seeing a lot of you in the future”.

Duo Maryanne and Paddy managed to fit three songs in two slots, performing ‘I want you back’ by Jackson 5 and a mash-up of ‘Rolling in the deep’ by Adele and ‘Little Talks’ by Of Monsters and Men. Showcasing both violin and guitar abilities, the mash-up proved to be popular with both the judges and the crowd as Shane Kennedy commented that he was “Mind blown” and “absolutely loved it”.

Ladies’ favourite Tomas Skelly kept the funky vibe rolling singing ‘Get Lucky’ by Daft Punk and ‘Stolen Dance’ by Milky Chance. Tomas has been a strong contender throughout the competition and he definitely did not disappoint Saturday night with his massive floor support being extremely vocal and the judges providing him with positive feedback once again.

Niamh and Roisin, known as Niro, took on Whitney Houston’s ‘I wanna dance with somebody’ and Lana Del Rey’s ‘Summertime Sadness’. Two powerful songs by idolised divas proved to be no problem for the duo as they did not miss a note throughout. Even with a microphone fault during their second song the girls were not fazed and showed their professionalism by continued to the end flawlessly.

Stylish trio Reprisal mixed things up providing the crowd with a rock version of James Browne’s ‘I feel good’ and Green Day hit ‘American Idiot’. The boys have proved their capabilities the past 2 weeks in their ability to nail any song they take on and of course Saturday night was no exception. Judge Liz Leavy commented that it was “the performance of the night” for her.

Sadly, we had to say goodbye to one act on the night which was Drifting Flames.

All of this week’s and last week’s performances are available on The Attic Youth Café Longford’s YouTube channel. The Attic are extremely grateful to Shane Crossan for offering his professional services in making this possible.

The organising committee wish to thank all the dedicated volunteers, Foróige staff, supporters, Youth Committee and funders for all their continued support with the competition. Also a big thank you to the Credit Union for their sponsorship over the past year and to Emer O’Brien for offering her services to contestants.

The LY Factor Final takes place this Saturday, January 31, with doors open at 8pm and the show beginning at 8.30pm. The show finishes at 10.30pm and parents are reminded to collect young people directly after the show.

Any national school students must be accompanied by a parent or guardian. As with all Foróige events, alcohol is not permitted under any circumstances either outside or inside at the event and organisers wish to thank locals for their continued support and understanding.

If you have any queries about the event or if you wish to volunteer with the Attic or Foróige please contact Ruth McGarry Quinn at torccafefoodhall@yahoo.ie or 0872626806.