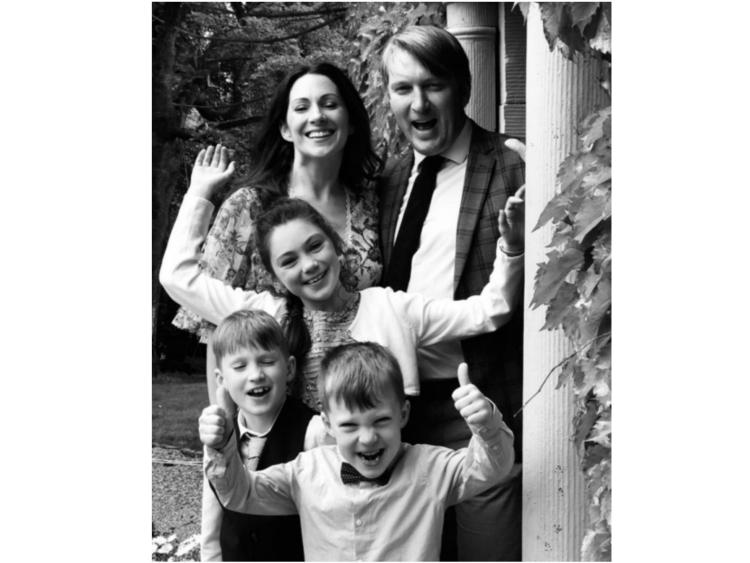 The late Conor Connelly with his wife Claire, daughter Caragh and sons Rossa and Eoin

One of the shining lights of the 1994 Leinster Championship St Mel’s College winning side, the late Conor Connelly, has been described as a “Roy Keane type character” who went onto become one of the most brilliant players of his generation.

The Creggs native (44) and current assistant secretary of Ballycumber GAA Club in Co Offaly passed away suddenly while out running near his home in Moorock, Ballycumber on Saturday morning.

A Connacht senior football championship medal winner with Roscommon, the multi talented right half-forward lined out against Mayo in the 2001 Connacht final at Dr Hyde Park as the Rossies ended a 10-year wait for the JJ Nestor Cup.

More locally, he won a Leinster SFC colleges title with St Mel’s College in 1994, and he went on to become a solicitor and also represented St Jude’s of Dublin and Ballycumber at club level.

His coach and teacher at the time and incumbent principal of St Mel’s College, Declan Rowley said there was no denying the talents of a man who excelled both on and off the field of play.

“I saw a tribute that was put on Facebook over the weekend where he was described as a sort of Roy Keane type of character and that was a very accurate way to describe Conor,” he said.

“He was incredibly motivated, a great person and an extremely good student academically.”

Evidence of those virtues were perhaps best summed up when Conor was awarded the Longford college’s coveted Fr Manning Gold Medal, an accolade given to a student for their academic and sporting contribution to college life in St Mel's

Mr Rowley was just as keen to allude to Conor’s deep seated affection for his alma mater, describing him as a “great ambassador” for the college in more recent times.

The college itself posted a touching tribute on its own Facebook page by alluding to Conor’s formidable midfield partnership with Martin Flanagan, a double act which was dubbed as being “one of the best in the history of St Mel’s football”.

One of those who played alongside him was current Longford manager Padraic Davis.

“He was a really quality guy,” remarked Padraic, as he laid claim to his former schoolmate’s insatiable desire for personal excellence.

“Conor was acutely sharp, he was very good in school and sport and he always got the very best out of himself.

“His trademark was to just work harder than everybody else in becoming the hugely talented footballer he was.”

Roscommon County Board Assistant Secretary and Creggs Club mate Gerry Keegan extended his sympathies to the family and said: “It's heartbreaking news, Conor was such a popular figure in Creggs GAA and was always there to lend a hand when needed even after his playing days came to an end."

"In our successful junior championship winning year in 2016, Conor brought us up to his current Club in Ballycumber Co Offaly for a midweek training session the Wednesday night before the final replay. His speech to us that night helped us clinch our first county championship in 33 years.

“It is with deep regret that we announce the sudden death of our player and assistant secretary, Conor Connelly. Conor passed away this morning while jogging near his home in Moorock, Ballycumber, Co Offaly.

“Conor was a former Roscommon and Connacht footballer and he played Club football in Dublin. He transferred to Ballycumber on his marriage to Claire Quinn and had become a very valuable addition to our club and the community.”

He is survived by his wife Claire, daughter Caragh and sons Rossa and Eoin, his parents Jimmy and Nora, brothers Robert, James and Darragh, sister Sharon, their wives and partners, his parents-in-law Stephen and Aggie, brothers-in-law Colm and Stevie, sisters-in-law Magali and Amy, and all his beloved nieces and nephews.

Due to the current government restrictions, the funeral must be immediate family only. A remembrance and celebration of Conor's packed full and joyful life will be held as soon as it is safe to do so.